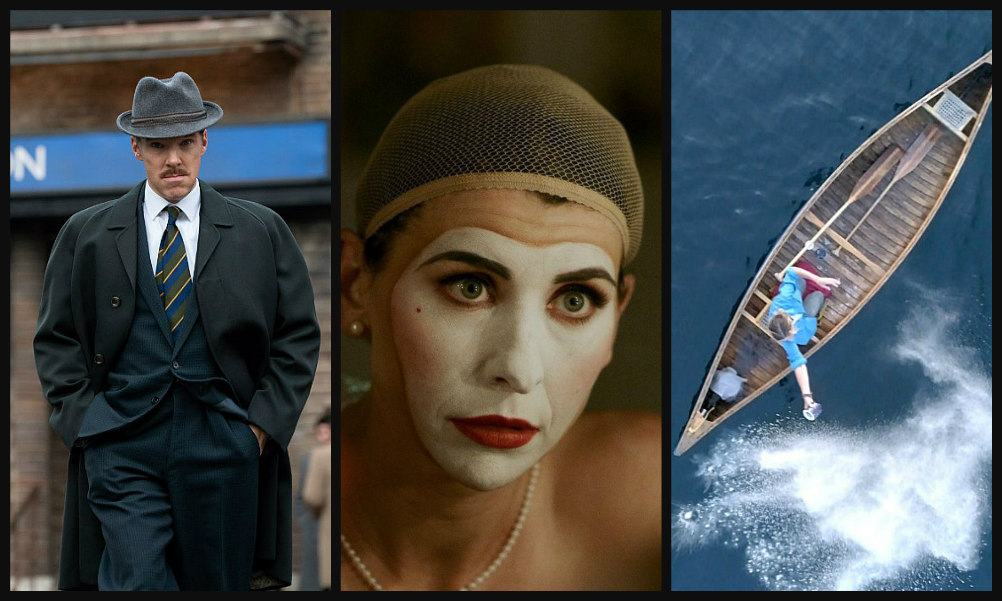 Also: The Earth showing off its best, a race-based tragedy, and a crowded melodrama.
Previous story
Next story

We’ve got two special days coming up. Thursday is Earth Day and Disney again allies with National Geographic for two notable series. I write about one today; the second, next week.

Wednesday is Canadian National Film Day and many outlets (now streaming only) are giving you free access to key films. At least three, including VIFF Connect, are showing an early Christopher Plummer film, The Silent Partner, in which he played a villain. Another is showing his Oscar-winning performance in Beginners.

The Cinematheque in Vancouver has Terrance Odette’s “affecting” feature Heater (1999) and Ellie Epp’s “avant-garde landmark” Trapline (1976), while the Whistler Film Festival is streaming James vs. His Future Self. Oh, and VIFF also has Goon, written by local product and Seth Rogen pal Evan Goldberg.

You can find more info for all of Canada here.

Oh, and DOXA has announced its films for this year. The fest starts May 6, but it’s not too early to see the list.

The Magnitude of All Things: 4

THE COURIER: It has been in “select theatres” for a month, which means practically nowhere, and is now available on demand. It’s worth finding for the true story and the performances, somewhat less than that for the production. Benedict Cumberbatch dons a moustache and a stiff upper lip as a British salesman who is recruited into high-stakes international secret intelligence at the time of the Cuban Missile Crisis. A Russian colonel (Merab Ninidze) is alarmed by the Kremlin’s armament program and offers to tell the West about it in exchange for asylum when he feels ready to defect. A CIA agent (Rachel Brosnahan) convinces Britain’s MI6 to bring Greville Wynne into it because he was “an ordinary businessman” already making regular trips to Eastern Europe. He wouldn’t be noticed.

Courier and contact become friends. They attend the ballet together. They sneak documents to the West, thousands of them, according to a postscript, though the sheer size of their operation is not made clear during the film. Also unclear is what effect it had. Did the Americans not know about the missiles in Cuba before that? More bothersome: The film does not get across the terror most of the world was feeling during the crisis. Or the full story of what happened to Wynne after that. It’s harrowing, but not complete, much like the film overall. Dominic Cooke, the director, is known for his work in theatre. He’s good with actors; not as much with the story they’re in. (Prime video on demand.) 3 out of 5

RANGE ROADS: It has been interesting to watch the work coming out of Alberta recently where filmmakers like Kyle Thomas have been more and more active, and getting noticed. Here he explores the idea of family with a story that feels true-to-life because of common incidents and emotions that most of us can recognize but sprinkled with lots of rare elements to keep them interesting.

Alana Hawley Purvis plays a star on a children’s TV show in Vancouver who has to make a quick trip to rural Alberta after her parents die in a car accident. She hasn’t been part of the family for 20 years and reconnecting proves hard. “You think you’re so much better than anyone,” says her resentful brother (Joe Perry). In a more lighthearted speech, he talks about the “pinkies” out there on the West Coast. The differences in the two communities are certainly established. There’s also an ex-boyfriend who she had left behind, chores like cleaning out the parents’ cluttered house and choosing a coffin, and a mysterious detail in their life insurance document. It’d be a spoiler to tell you where that leads, but along with other revelations, like an old gift that dad had never opened, the point is made: You never know everything about your family. (Streaming twice Saturday evening as the closer at the Canadian Film Festival on Super Channel and soon from the Calgary Underground Film Festival.) 3 out of 5

THE MAGNITUDE OF ALL THINGS: You’re definitely going to be affected by this one, even if you don’t quite understand the connections Jennifer Abbott makes between the two subjects at hand. But, it’s a poetic and very personal essay, so listen to her, not me, on that one. She lost her sister years ago to breast cancer and coming to grips then with the grief she felt gave her a deeper understanding of how people are being affected by climate change now. Accept it or not, watch and feel the two storylines play out in this superb film.

You’re taken all over (Australia, the Amazon, the Canadian North, Tasmania, and more) to see how people are affected by climate change. “You don’t realize how much you’ve lost until you stop and think about it,” says an Inuit elder. “If the land hurts, we hurt,” says an Australian native. “Help us. Don’t kill us,” says an activist. One observer points out that public opinion has gone right from “denialism” to “panic” with none of the usual analysis in between. Greta Thunberg makes her now well-known points and another woman tells the world to “stop dreaming.” It’s all deeply felt and Abbott cuts away now and then to readings from her sister’s letters. It still feels like two parallel streams flowing here, but they do stir up strong emotions and understanding. And maybe, as the later speakers advocate: Action, revolution even. (Streaming at VIFF Connect.) 4 out of 5

EARTH MOODS: Disney has two contributions to Earth Day this year. I’ll have the second, James Cameron’s Secrets of the Whales, next week, the day after it premieres. This one, a five-part series also from National Geographic Films, is a visual tone poem with sparkling imagery of natural wonders. You never see a person, just birds now and then, as the camera takes you swooping over and around landscapes to see shapes and patterns in the rocks, land, and water.

Glaciers in the mountains in Idaho and Montana look like wrinkled skin. The mood is calm. There’s serenity on beaches and at waterfalls in Costa Rica and the Caribbean. Desert solitude takes you to the Valley of the Gods in Utah, (where you expect to see riders like in a John Ford western), and other places, including Namibia in Africa. Tropical serenity gives you lots of water, and fish under there, and a turtle floating carefree above. One episode is entirely urban, floating us high above oozing highways and twinkly towers in California and Australia. Earth doesn’t have any angry moods in these half-hour sequences. Just calm, like in new-age music videos. (Disney+.) 3½ out of 5

3½ MINUTES, 10 BULLETS: It’s five or six years old already but feels absolutely timely now that it’s been brought back. (I’m not aware that it ever played in Canada before). News stories right now are about Black men killed by white cops in Minnesota. Almost 10 years ago there was Trayvon Martin killed by a white man in Florida, and not long after that another 17-year-old, Jordan Davis, shot dead in a parking lot. His story is told in this engrossing documentary.

We get most of it through video of the court case in which Michael David Dunn was on trial for murder. Dunn had asked four boys in the car parked beside him to turn down their blaring rap music. One did, Jordan got angry and turned it back up. Dunn said he saw a rifle pointing at him, was scared for his safety and shot his gun at the car 10 times. Jordan died. The main issue was Florida’s "stand your ground" law. You don’t have to prove there was a real threat, just that you felt threatened. We get the facts in detail from the court testimony, video of police interviews with the accused and from new interviews with the dead youth’s mother, father and friends. The film, written and directed by Marc Silver, gets across the family’s grief and anger and also the toxic Black-white relationship that keeps reappearing in the U.S. (Streaming by The Impact Series or on demand on Hollywood Suite.) 4 out of 5

THE VIOLENT HEART: This film is engrossing for much of its early running time, but then switches. Coincidences stroll in along with scenes that don’t feel as real as what’s come before. And ultimately a big dose of melodrama. It’s still watchable, at times even enjoyable, but don’t take it seriously.

A teen couple hook up in a small Tennessee town. She’s white and perky (Grace Van Patten), a good student and with her own father (Lukas Haas) as her English teacher. The boy (Jovan Adepo) is Black, working in an oil-change garage but dreaming of joining the Marines like his dad. His mom (Mary J. Blige) is supportive, but with not much to do in this small role. The focus is squarely on the teens.

Oddly, race is hardly mentioned in or about their relationship. There’s too much story for that, as written and directed by Kerem Sanga. The boy saw his sister murdered years before but didn’t tell and couldn’t have identified the killer anyway. He can’t get into the Marines because of a criminal record after a fight he was in. She sees her dad in a suspicious situation with another teacher and suspects an affair. That’s a lot of baggage the two teens bring into their relationship. It’s thinly-developed and soon upstaged by unbelievable events. The acting and scene-setting are good, but the writing is substandard. (VOD & digital release.) 2½ out of 5