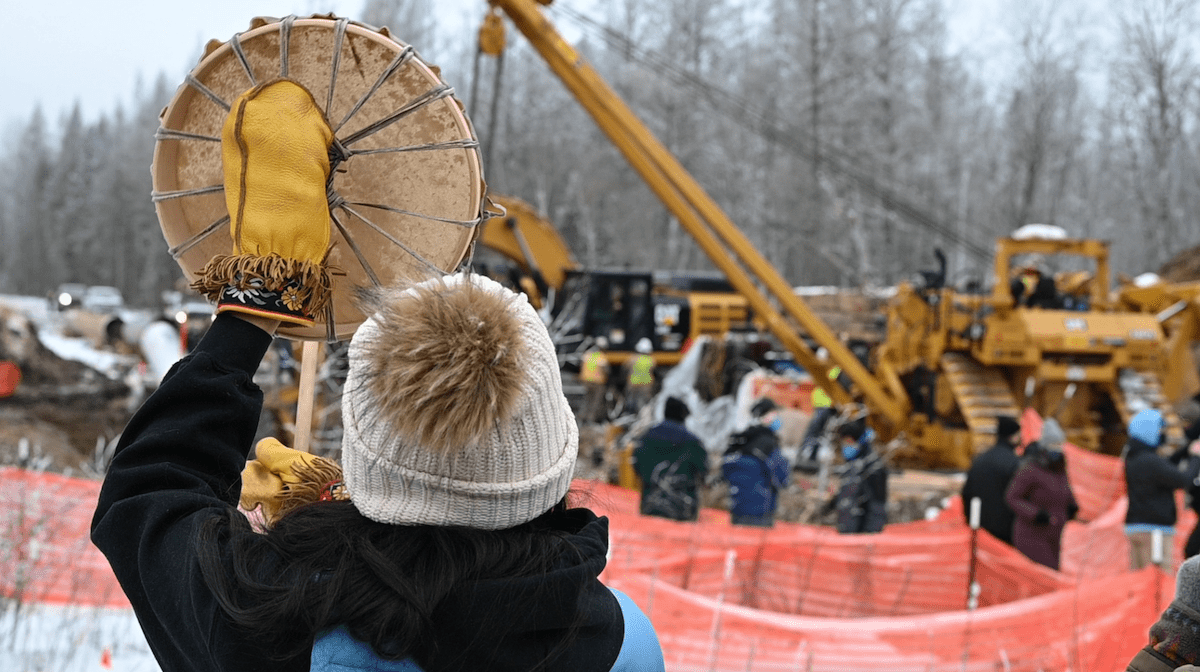 Anti-pipeline activists are accusing Canadian energy transportation giant Enbridge of setting a disturbing precedent by providing funds for policing its Line 3 pipeline in northern Minnesota. As police book more overtime, there is concern among opponents they are deliberately targeting the Indigenous women resisting the project.

Police have reportedly followed activists, pulled over their vehicles and disrupted prayer assemblies. Activists told National Observer that drones have been deployed for aerial surveillance, and that people have been detained in cages.

“In Hubbard County, they have set up what are basically dog kennel cages in a police garage,” said Mara Verheyden-Hilliard, a lawyer with the Center for Protest Law and Litigation. “That’s where they put water protectors initially when arrested. When inside the cage, they’re handcuffed to the fencing.”

On March 25, 26 protesters were arrested in Hubbard County. In such circumstances, when a large number of people are brought in at one time, the county sheriff's office says individuals simply cannot be brought into the booking area at once.

“There is chain-link material in our garages, yes,” says Hubbard County Sheriff Cory Aukes. “So prisoners do wait in our garage bays where they are then brought in one at a time for booking purposes… But we treat every prisoner with dignity and respect.”

Enbridge is paying for policing through a fund called the Public Safety Escrow Trust Account, which police forces can then draw on. The fund was set up in May 2020 upon approval of the Line 3 permit by Minnesota’s Public Utilities Commission (PUC). The Line 3 permit stipulates Enbridge must pay law enforcement for any pipeline-related public safety activities to avoid placing additional costs on Minnesota taxpayers.

“They’re pouring large sums of money into local sheriff's departments, who can then tap the funds for any use that’s related to the pipelines,” said Verheyden-Hilliard. “It incentivizes them to take action against peaceful opponents of the pipeline.”

Billed as a replacement to a crumbling pipeline that has been in operation for half a century, the new pipeline, which is already almost half complete, would carry up to 760,000 barrels of crude daily, travelling 338 miles along an alternate corridor in northern Minnesota, crossing 79 miles of wetland and 200 bodies of water.

To date, it is estimated more than 150 people have been arrested protesting Line 3, mostly on charges of unlawful assembly and trespassing.

Anti-pipeline activists are accusing Enbridge of setting a disturbing precedent by providing funds for policing its #Line3 pipeline — and opponents worry Indigenous women who oppose the project are deliberately being targeted.

“It’s a constant, daily battering from law enforcement,” said Dawn Goodwin, an Ojibwe water protector who lives on the White Earth Reservation. “It brings back memories of what happened with the Dakota Access pipeline. It makes us wonder, what’s next?”

Some Indigenous women say, as a visible minority, they are being racially profiled.

“We are a highly visible target,” said Tania Aubid, an Ojibwe activist and member of Mille Lacs Band. “Sometimes we get pulled over, and the police tell us that the registration sticker on our licence plate doesn’t completely cover the previous sticker. They’re just looking for excuses.”

However, the Hubbard County Sheriff’s Office, which has submitted invoices for reimbursement from the escrow account but has yet to receive any money, says having Enbridge donate to the fund has merit, and that the process is not being abused.

“The Hubbard County taxpayers shouldn’t have to bear the costs of the extra expenses incurred on this project,” said Aukes. “This escrow fund has absolutely no effect in the manner in which we enforce our state’s laws.”

In one jurisdiction, Cass County, the sheriff’s office has drawn US$327,224.65 from the account. The county’s sheriff, Tom Burch, says the extra funds are necessary, given the size of the county and the demands being placed on his officers.

“My guys are strained and busy enough — they don’t need any extra overtime,” Burch told National Observer. “And we certainly aren’t harassing anyone. The biggest issue is that local taxpayers shouldn’t have to assume the financial burden. I don’t care what company it is — if they’re creating extra work for us, I expect them to pay.”

Enbridge initially deposited $250,000 into the escrow account. The PUC has since informed National Observer that, to date, the company has upped that amount to $1,250,000. A total of $877,710 has been disbursed, with no end in sight.

“The commission's orders and pipeline routing permit for Line 3 don’t establish an upper funding limit,” said Will Seuffert, a spokesperson for the PUC. “The account is to be appropriately funded throughout construction during the term of the pipeline routing permit. Any amounts not distributed within 180 days of the completion of construction shall be returned to Enbridge.”

Despite police claims to the contrary, protesters on the ground say Enbridge’s money is having a negative effect.

“The fund definitely makes it worse for us,” said Goodwin. “The cops have become mercenaries for the pipeline company.”

From a corporate perspective, the sums set aside by Enbridge are relatively small, given Line 3 represents a $4-billion investment. Nonetheless, the money can have a real impact on cash-strapped sheriff's offices.

“It’s a giant slush fund for overtime,” says Verheyden-Hilliard. “Individual officers are making a lot of money off the privatization of American law enforcement.”

In email correspondence with National Observer, Enbridge pointed out that establishing the account was a condition of the company’s route permit, and that there is a governance structure to ensure the money is used properly. Local government units must submit written, itemized requests to the public safety liaison appointed by the PUC.

“The Public Safety Liaison makes the determination on eligible expenses, and then makes payment accordingly,” wrote Tracie Kenyon, senior corporate communications adviser at Enbridge. “These requests are not made to, nor does payment come from, Enbridge.”

However, the PUC was concerned enough that on May 1, 2020, it specifically instructed Enbridge “to avoid engaging in counterinsurgency tactics or misinformation campaigns designed to interfere with the public’s legal exercise of constitutional rights.”

Nonetheless, the police forces in northern Minnesota have engaged in heavy surveillance along the Line 3 replacement route. In March, actor Jane Fonda was late to a press conference opposing Line 3 after police pulled over the vehicle leading her caravan.

“While we were in Minnesota, we were tailed twice for long distances by the police, who knew we were there to support the water protectors,” Fonda told National Observer in an email exchange. “We were caravanning with Mara Verheyden-Hilliard, and the rental car had a California licence plate. I bet the officer thought it was me, and that they could make me miss the press conference.”

Verheyden-Hilliard and Indigenous activists Tara Houska and Winona LaDuke, among others, are now working on a lawsuit that challenges Enbridge's alleged privatization of public police forces.

“It's provided a big financial incentive to police officers to spend time harassing, arresting, strip searching and caging people who are only trying to save their lands and waters,” said Fonda.

For its part, Enbridge believes the public safety liaison places the company at sufficient distance to negate concerns that specific police actions — including any heavy-handed behaviour by individual officers — are being unduly influenced by private money.

“Community police and sheriff deputies are responsible for public safety,” said Kenyon from Enbridge. “Officers decide when protesters are breaking the law — or putting themselves and others in danger.”

The story on the ground is somewhat different. Activists have witnessed behaviour that suggests some sheriffs will do Enbridge’s bidding.

“It's been the experience of a number of volunteers that as soon they arrive somewhere, either security or Enbridge workers call the sheriff,” said Scott Russell, a member of an all-volunteer group, Watch the Line, which observes and reports on Line 3 construction. “Some county sheriff's offices are providing regular patrols for Enbridge, work they can charge back to the escrow account.”

The resistance to Line 3 remains well-organized. There are active legal challenges attempting to stop the project, with Indigenous activists receiving broad support from allies outside their communities.

“Indigenous women are on the front lines, for sure, but 70,000 people came out to oppose Line 3 in the various hearings,” said Winona LaDuke, executive director and co-founder of Honor the Earth. “There’s strong opposition across the board.”

Despite the broad support, the deployment of state forces against activists, with the police funded by the deep pockets of a multinational energy corporation, including for the purchase of riot gear, can take a psychological toll.

“I feel sad, I feel disrespected,” said Goodwin of the White Earth Reservation. “It makes me angry. It really hurts that I am being judged for protecting the water for future generations.”

Individuals volunteering for Watch the Line are encouraged not to go out alone, as the distances are great and the intimidation can be intense.

“We've had volunteers followed by sheriff's cars,” said Russell. “That can be particularly intimidating for women.”

Activists contacted by National Observer were heartened by the attention being brought to bear by national figures like Louise Erdrich, who wrote an opinion piece in the New York Times, and Jane Fonda. For her part, Fonda remains optimistic the Biden administration may yet step in and cancel Line 3, as it did with Keystone XL.

“Line 3 is just another attempt at riding roughshod over Indigenous rights and precious, fragile lands and bodies of water,” said Fonda. “But there is an important difference… We now have a progressive administration with cabinet members who understand that time is running out.”

Shocking to hear about this

Shocking to hear about this privately-funded abusive police behaviour...

I will definitely be

I will definitely be following TE Wilson from now on. It’s great to see good investigative reporting carried on in the National Observer.

1) Why is line 3 crossing indigenous lands? Why is Line 3 positioned to despoil one of the nation's premier reserves of fresh water?
2) Who was the genius who proposed this route? Was the choice influenced, by any chance, by the business as usual environmental racism?
3) Do you suppose that the police definition of "respect and dignity" bears any resemblance to Webster or Oxford Dictionary definitions?
4) I wonder how many people in Cass and Hubbard Counties agree with this invasive pipeline?

We all know that Fossil fuel burning has to cease if there is any chance that life on earth will survive. How is it that supposedly "smart" people in government are supporting this? We all know why an entire industrial sector is supporting it - because they are actually making money from it - mostly by picking the pockets of taxpayers.

So well said, Betsy, on all

So well said, Betsy, on all counts!

I guess this isn't going away

I guess this isn't going away any time soon so a few more thoughts. It is quite apparent that policing, as we know it , was originated by the propertied classes to protect their wealth and their persons. It has always been the tool of oppression charged with keeping the undeserving poor from disturbing the privileged rich.

Why should we be surprised that the police, even in supposedly democratic nation states, should still be primarily concerned with preserving the well-being of the privileged and wealthy. Human society, universally, (with the exception of tiny remnants of tribal/indigenous communities) employ mercenary "warriors" to protect their exclusive resources. Even when policing and security were turned over to the governments to fund and to regulate,. the usual hierarchy managed to maintain its privileged status. The genius who came up with the "Serve and protect" slogan was co-opted by the usual suspects to peddle an obvious lie.

We are now in an unacknowledged but desperate battle to bring this modern day Praetorian Guard under some kind of democratic, civilian and lawful control.