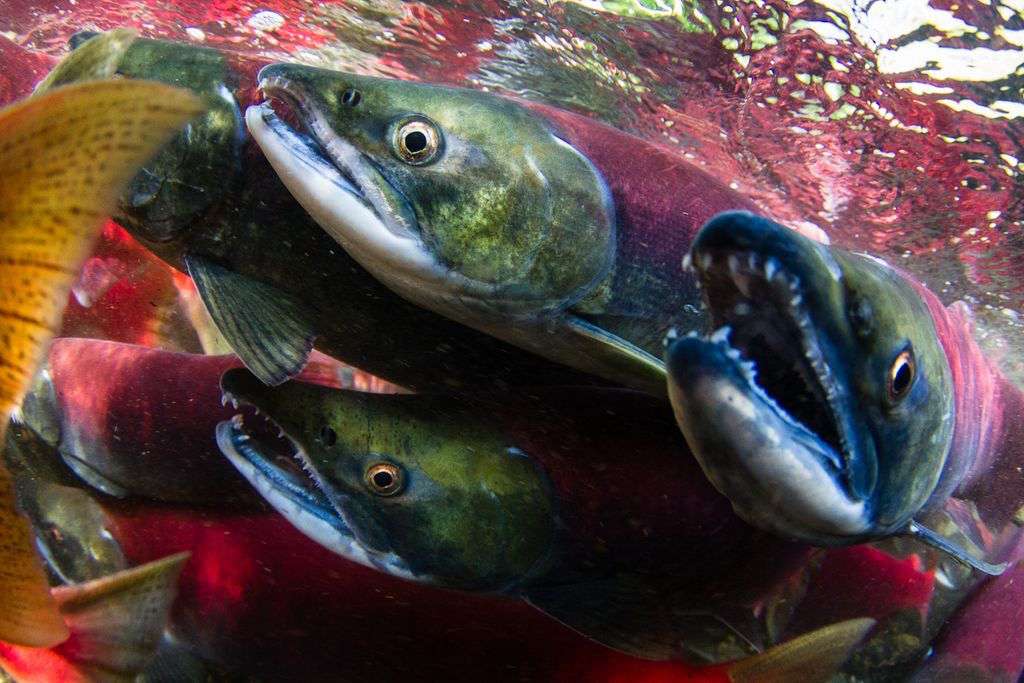 The investment in the West Coast’s iconic keystone species comes as wild stocks are suffering declines of 93 per cent since the early 1990s. Photo by Johnny Armstrong / Wikimedia (CC BY-SA 2.0)
Previous story
Next story

A significant chunk of change was set aside to preserve wild Pacific salmon in the federal budget released Monday.

A little more than $647 million will be spent over five years to bolster efforts to save plummeting wild Pacific salmon stocks.

The investment in the West Coast’s iconic keystone species comes as wild stocks are suffering declines of 93 per cent since the early 1990s due to cumulative pressures from climate change, habitat destruction, fish farms, overfishing and changes to the marine food web.

In particular, the Fraser River’s sockeye runs have seen historic back-to-back poor returns, with only 293,000 fish returning last year, down from 10 million to 20 million fish three decades ago.

The funds will be allocated to stabilize and conserve wild salmon populations through investments in research, new hatchery facilities and habitat restoration.

“It’s been a priority for us, but we need to do more," Jordan told Canada’s National Observer.

“We need to do everything we can to not only protect the salmon and conserve them, but … it’s also important that we have abundance,” she said, adding salmon are intrinsically linked to the culture of British Columbia.

“I would say it’s one of the most significant budgets for wild salmon that I've ever seen. And it's desperately needed because our salmon are in crisis," says @AaronHill_ @WatershedWatch_ of $647 million in federal budget to save #WildSalmon.

The budget reflects the need to take a holistic approach to help recover wild salmon stocks — a mainstay for thousands of workers and hundreds of coastal and First Nations communities, as well as other animals, such as endangered orcas, Jordan said.

The budget builds on the previous federal investment of $246 million to help salmon passage in the Fraser River following the Big Bar landslide in 2019, Jordan said.

“The prime minister has mandated me to come up with a Pacific salmon strategy, so now this (budget) gives us the means to do that,” she said.

The budget has doubled the British Columbia Salmon Restoration and Innovation Fund, providing an extra $100 million.

A Pacific Salmon Secretariat and a restoration centre of expertise will also be developed, Jordan said.

Improved management of commercial and recreational fisheries and continued engagement with First Nations and fish harvesters were also outlined in the budget as priorities.

“I would say it’s one of the most significant budgets for wild salmon that I've ever seen,” Hill said.

“And it's desperately needed because our salmon are in crisis.

“So many important functions of salmon management have been cut to the bone over the years that this is the scale of investment we need if we're actually going to have a chance of reversing the declines.”

Michael Meneer, president and CEO of the Pacific Salmon Foundation, agreed that the federal budget commitment to wild salmon is a good step.

“Many groups have been calling for more investment, because it is a very complex and large challenge that we're facing.”

The factors causing the decline of wild stocks and the long life cycle of salmon mean there is no single solution or quick fix to the problem of declining stocks, Meneer said.

“There’s no silver bullet,” he said.

“A number of things need to be done in a co-ordinated way with climate change as the context, and by bringing all the players together.”

“Salmon do need to be co-managed,” he said.

“Indigenous, federal and provincial governments have to be working together. We can't have silos, and it can't be top down.”

“How the money is allocated is extremely important,” he said, adding it was good to see improving fisheries management as a priority.

“We can't manage fisheries properly right now because we lack the basic data that we need to answer the key questions,” Hill said.

How many fish are in streams, who is catching fish, where and how many are all things that need to be determined, he said.

“Our stock assessment and our catch monitoring and enforcement are below national and international standards, so that’s a very important focus,” Hill said.

The amount of money earmarked for habitat restoration was great, Hill said.

“It’s important to focus it on the critical habitats that are bottlenecks for survival, for the populations that are most at risk, or for where we have the best shot of making a measurable difference,” he said.

For example, 1,500 kilometres of salmon habitat in the lower Fraser River is locked off by outdated flood-control structures, Hill said.

Salmon-friendly upgrades to the structures would create a win-win solution, he said.

“It would not only improve safety from flooding, but it opens up these salmon habitats, and it creates employment.”

Both Meneer and Hill said the details from Fisheries and Oceans Canada (DFO) will be key.

Jordan did provide any specific timelines, but recognized the need to act quickly.

“Salmon are in decline,” she said, adding the issue was critical.

“We need to have all hands on deck as quickly as possible, so things will be starting to pick up very, very soon.”