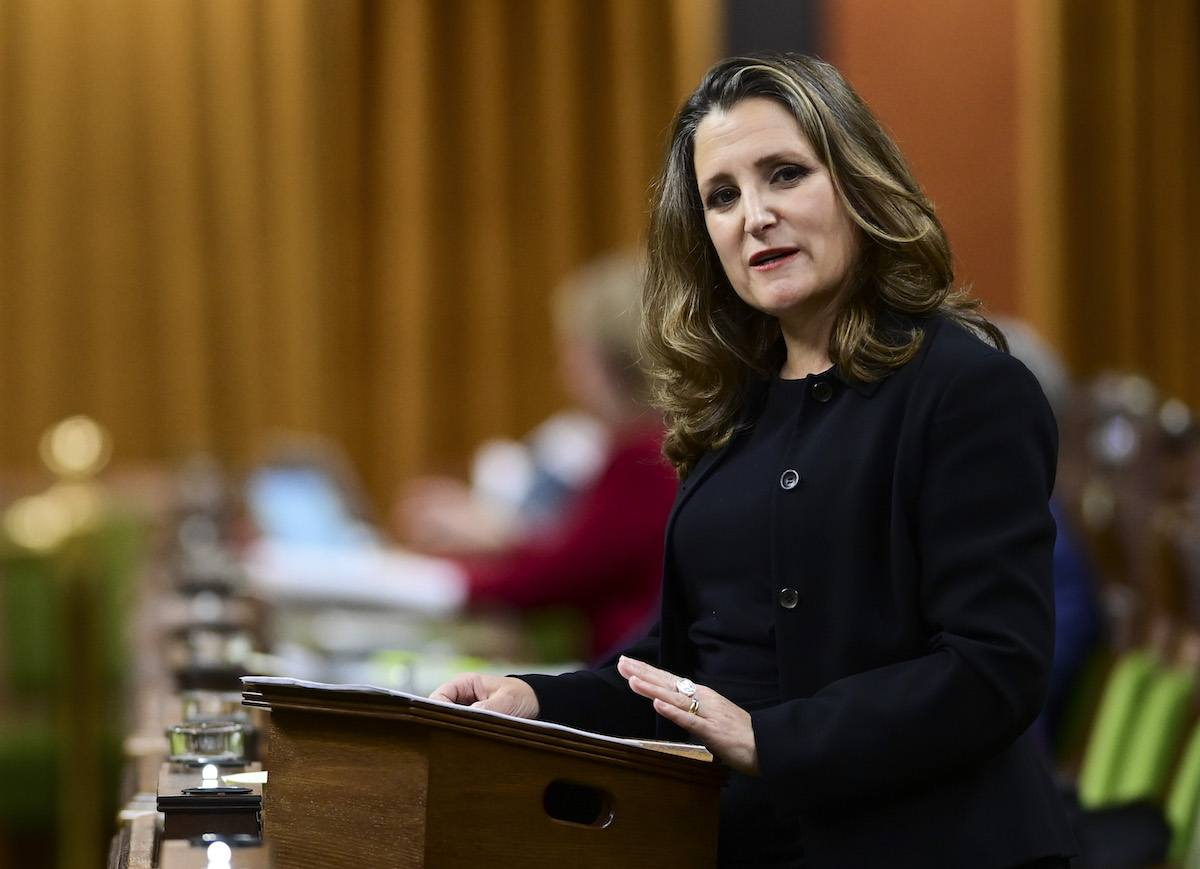 Minister of Finance Chrystia Freeland delivers the 2020 fiscal update in the House of Commons on Parliament Hill in Ottawa on Monday, Nov. 30, 2020. THE CANADIAN PRESS/Sean Kilpatrick
Previous story
Next story

In politics, as in life, you should be careful what you wish for. In a Monday morning tweet, Conservative Party of Canada Leader Erin O’Toole complained the governing Liberals “offer no solutions.” This was not a particularly wise thing to say in advance of a budget that everyone expected would be one of the most ambitious in Canadian history, and Chrystia Freeland, in her first budget as minister of finance, didn’t disappoint. Indeed, Canada’s first female finance minister may have delivered the most solution-oriented budget in recent memory, one that featured everything from $10 daycare to a $15 federal minimum wage and more than $100 billion in overall new spending.

If anything, after nearly two years without a budget, it feels like the Liberal government is trying to cram at least two years' worth of policy into this one. It wasn’t short on climate solutions, either, adding $17.6 billion in new spending on climate-friendly measures to the $15 billion it announced last year and the almost $15 billion it committed to public transit in February. As Evan Solomon said on Power Play during his interview with O’Toole, “That’s real dollars. It’s hard to pretend that’s just getting you a little damp. That soaks a lot of things with money.” And while that money will be soaking things like energy-efficiency retrofits ($4.4 billion over five years), low-emission fuels ($1.5 billion) and electric vehicle charging infrastructure ($56.1 million), this budget seems to have a bigger climate prize in mind: the rapidly growing global green economy.

Take the $5 billion that will be going into the federal government’s “Net Zero Accelerator,” which is part of its broader Strategic Innovation Fund and its mandate to stimulate and support key industries across the country. This will help fund and advance projects that can reduce Canada’s greenhouse gas emissions, but it also speaks to the growing opportunities associated with exporting Canadian clean technology and expertise. Flavio Volpe, the president of Canada’s Auto Parts Manufacturers' Association, tweeted that this was “a game-changer for (the) Canadian zero-emissions vehicles business.”

That funding isn’t the only potential game-changer. Budget 2021 also floats a 50 per cent reduction in corporate and small business tax rates for businesses that manufacture zero-emission technology, one that would kick in on Jan. 1, 2022, and be phased out by 2032. There’s also a proposed tax credit for carbon-capture technology, which will be key to helping heavy industry in places like Alberta bend their own emissions curve. All of this seems designed to build a policy sail that can help Canada catch the climate-finance winds that are blowing around the world.

Those winds will be howling later this week, when global leaders meet on Thursday at a virtual climate summit convened by President Joe Biden and his climate envoy John Kerry. That’s when the United States is expected to reveal its own plan for cutting emissions over the next decade, and potentially raise the bar on Paris Agreement targets — one they'll expect other countries to meet. It shouldn’t come as a total surprise, then, that Monday’s budget included a new forecast that has Canada reducing its emissions from 2005 levels by 36 per cent — more than the 30 per cent target that’s part of the Paris Accord.

But budgets are, by their very nature, aspirational documents. And for all the work that Canada has done on climate in recent years, our emissions are still stubbornly high. Absent the impact of the pandemic, it’s not clear they would have gone down in 2020, or that they’d be going down in 2021. Earnest promises and optimistic projections may have gotten the job done when Donald Trump was still in office, but Thursday’s summit will mark the beginning of a new phase in the global effort to address climate change — one in which the race is more oriented to the top than the bottom, and where the prize associated with winning gets bigger every day.

Canada is fortunate to have a head start there, and the existence of a rising price on carbon will serve as a natural tailwind. But if we want to actually compete in this race, much less win it, we’re going to have to do more than just coast. And if the last year tells us anything, it’s that deficits don’t have to stand in the way of our shared priorities or our collective well-being. For all the talk from Conservatives like O’Toole and Pierre Poilievre about the perils of deficits and debt, we’re still in jeopardy of leaving our kids and grandkids with a shared climate debt. That debt will be even harder for them to pay off if we miss out on the opportunities associated with the green economy.

In other words, the real danger right now isn’t doing too much. Instead, it’s doing too little. On that front, Freeland’s first budget is a step in the right direction. But her next step, if and when it comes, will need to be much, much bigger.