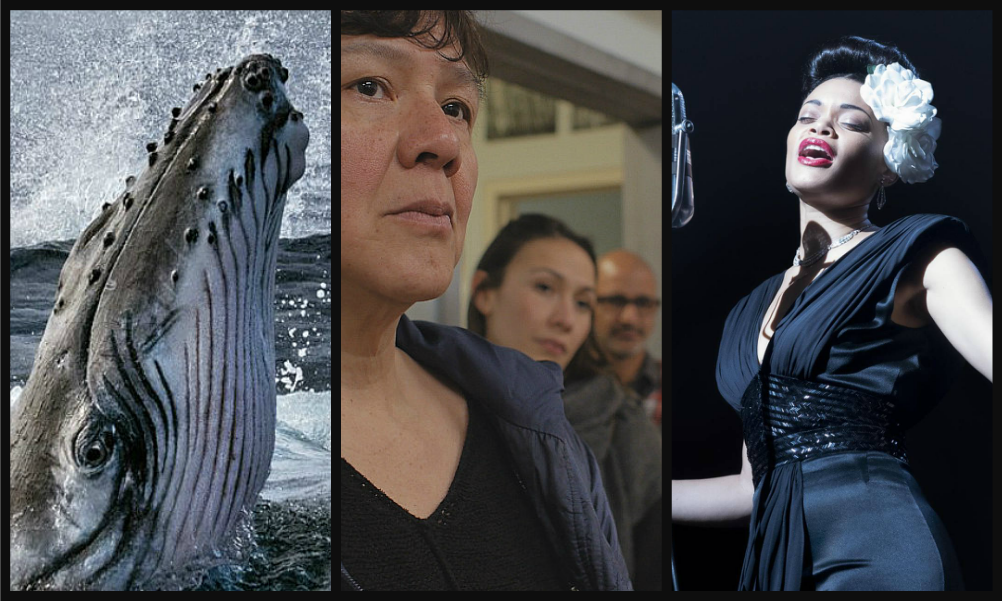 The Oscars are being handed out Sunday. I have a late catch-up to one nominee. And two documentary festivals are coming: Hot Docs next week, DOXA the week after. I review one film that’ll be at both.

Plus a varied collection of others, all on this list.

Secrets of the Whales: 4½ stars

Kimmapiiyipitssini: The Meaning of Empathy: 4

The United States vs. Billie Holiday: 3½

SECRETS OF THE WHALES: Disney’s annual Earth Day contribution is again special. Anybody out here on the West Coast will enjoy this and maybe be moved by it. Whales are part of the sea world out here, often sighted off ferries or even in protected harbours. Much of the anti-pipeline protest has been about whales; how all that increased tanker traffic will affect these vulnerable animals. Maybe you saw them at the aquarium and this will help you understand why they’re no longer allowed to be in captivity there. This four-part series states several times that they are immensely intelligent and illustrates intimately what National Geographic photographer Brian Skerry says: “These animals have culture.”

We see mothers teach their calves all the secret tricks they know. Creating bubble circles, for instance, to corral fish. Or group them into a giant ball in another location or rip open fishermen’s nets in another. Or some really amazing creations in the water: “P-shaped rings.” There are never-before-filmed scenes, including a sperm whale suckling her babies and a spectacular one in which whales manage to capture sea lions off a beach. There are really interesting scenes of a teen whale being taught how to do that. The photography is excellent, and so we get to see it all and, through the four episodes, in many locations, Alaska, Australia, Antarctica, Norway, Patagonia and more. There’s breathless narration by Sigourney Weaver explaining everything you see, often with enthusiastic comparisons to human families with their “social bonds.” James Cameron, continuing his fascination with oceans, produced the series along with National Geographic. (Disney+) 4½ out of 5

KIMMAPIIYIPITSSINI: THE MEANING OF EMPATHY: Or compassion and sharing. That’s from the language of the Blood First Nation in Alberta and succinctly describes a new way of dealing with drug addiction. It’s not new in Vancouver, where harm reduction has been used (and often debated) for years. It saves lives better than the usual “abstinence” approach, and it was introduced to handle a crisis after fentanyl arrived seven years ago on the reserve near Lethbridge. At one point there was an overdose every two hours, according to numbers cited in the film.

Filmmaker Elle-Máijá Tailfeathers made the film starting with Vancouver advocates of the new technique, The Portland Hotel Society, “Spikes on Bikes,” and others, and then watching people apply it on the reserve. A leader there is Elle-Máijá’s own mother, Esther, a doctor who advises addicts and helps care for addicted babies. Her mantra is “give kindness.” A simple question, “Are you OK” is rare and welcomed, she says of her clients. We see several of them go through the program, tell their stories (abuse, racism, residential schools are often in there) and come up with new dreams. As one says: “We were strong ... we want to get back to that.” The National Film Board documentary has a powerful message of hope and what’s possible. It premieres at the Hot Docs Festival next week and is also part of DOXA, starting a week after that. (You can stream from either anywhere in Canada.) 4 out of 5

THE UNITED STATES VS. BILLIE HOLIDAY: This is my catch-up with the one major Oscar contender I hadn’t seen before, even though it has been out there on demand for a few weeks. It has one nomination, best actress for Andra Day, and that’s fitting. Her performance is far better than the film itself. She’s a singer making her acting debut and captures the intensity of Holiday’s vocal performances and her passion and vulnerability. It’ll be hard to beat Frances McDormand in the category, but the emotional truth she projects is a joy to take in.

The film? Not so much. Lee Daniels in his direction again shows his usual technique: He boosts politics over the human story. Holiday had a rough and abused childhood and turned to drugs later on. That’s mentioned only briefly here. Instead, we see her as a victim of the U.S. government, which wanted to stop her performing the anti-lynching song Strange Fruit because it could start a civil rights movement. How true that is, I don’t know and the film doesn’t convince me. Garrett Hedlund as Harry Anslinger, the longtime head of the Federal Bureau of Narcotics, is after her. (A clip at the end shows the real man getting praise from president John Kennedy. Typical Daniels irony.) Anslinger, looking to get her on drug charges, sent informants to get close to her. One of them, played by Trevante Rhodes, became her lover. Other relationships are thinly sketched and the film as a whole is choppy. It looks terrific, but doesn’t grip. There’s one sentence in a postscript that is more compelling. (Rent or buy at the Cineplex Store or Google Play.) 3½ out of 5

TINY TIM: KING FOR A DAY: Perhaps the oddest entertainer who made it big back in the late 1960s is fondly remembered in this breezy documentary. With long hair that always looked greasy and a large, hooked-nose, he sang old songs in a high-pitched warble. Tiptoe Through the Tulips was his big hit, as was he at festivals (before stoners, no doubt) and on TV starting with Laugh-In and culminating in a Johnny Carson appearance. That was the night he got married live on-air to Miss Vicki, while millions watched what was declared one of the highest-rated shows ever.

This film, directed by Johan von Sydow and narrated with entries from Tim’s diary by Weird Al Yankovic, gives you his whole story and many clips of his appearances from Ed Sullivan, Bing Crosby, Jackie Gleason to the Isle of Wight. He had prayed to Jesus, it says, woke up with a high voice and the need to “sing the sissy way.” And to eternally seek acceptance and love, which he didn’t get as a child. The film goes further. We see what happened after fame left him. Broke and living in a hotel room is part of it. Reduced to working in a circus. Mean outbursts. As Wavy Gravy sums it up: “People didn’t understand his genius.” (Streaming from Yuk Yuks. Find the link here.) 3 out of 5

THE MARIJUANA CONSPIRACY: Intriguing story (true, too), actors giving it a good shot, but a letdown from the writing. Despite much promise, this film ends up feeling artificial, not compelling. A minor fragment of history. Back in the early 1970s, the Le Dain Commission studied recreational drug policy in Canada and may have contemplated legalization of marijuana. A secret research project was run in Toronto to see what that would mean. A group of young women were paid to participate. They lived together for 98 days, couldn’t go out or communicate with outsiders, and had to smoke weed every day.

Seems like a vacation, but that’s not how it turned out. Their different personalities emerged; some felt confined (“You can’t keep me here.”), some were bothered that observers stood around watching them and taking notes, some thought it was absurd that to get paid for the test, they had to create items in macramé. Julia Sarah Stone, the most recognizable of the actors, plays a street kid. Tymika Tafari is a Black teen concerned with race issues. There’s a hippie, a dimwit, a dreamer, and others. One starts a hookup with one of the observers. It’s a good mix, but doesn’t lead to much and scenes play out much too obviously. First-timer? She has a coughing jag. Music? One Toke Over the Line and The Pusher are there. The project stayed hush, hush. Trudeau declined to legalize; his son did. It’s funny if you’re a pot activist; merely a curiosity for almost everybody else. (VOD and Digital Release.) 2 out of 5

THE MARKSMAN: Liam Neeson’s latest has been around for a while, too, but recently became more available through streaming. Other than that, it’s typical of the way his career has been going lately. When he’s not rescuing a daughter from bad guys, he’s fighting them off in other situations, and never mind the logic. Watch an ordinary man take a stand on principle.

Here he’s a rancher in Arizona, near the wall Trump wanted to build to keep Mexicans out. This section is up, but a small hole allows a boy to cross. His mother brought him there to escape from some drug cartel guys who want revenge on an uncle by killing all his family. Waved through by a crooked border guard, they come across looking for the boy. Liam can’t leave him in danger, and with the help of a scribbled note, sees he has to get to Chicago where his other relatives live.

That gives us a cat-and-mouse chase through several states, with tense scenes along the way, and lots of suspense and gunfire. Liam’s house gets burned. His pickup truck starts overheating and getting it fixed is possible, but dangerous. The cartel crew, led by a suitably snarling hood, has contacts everywhere, including a guy who can track where credit cards are used. Later, there’s a roadmap on which the boy has circled where they’re heading. It’s gimmicky that way, but moves at a good clip and with the customary excitement you’re looking for. (Now available across all digital and on-demand platforms.) 3½ out of 5

BLOODTHIRSTY: Here’s a Canadian horror film that works. It’s not pushing heavy gore, and except for an opening teaser, the blood takes a long time coming. What is delivered, and well, is a creepy atmosphere and a lot of dread. A singer with a hit album (Lauren Beatty) is under pressure to record a followup, and is surprised when she’s invited by a famous producer with a notorious past (Greg Bryk) to work with him. He has a home studio in a mansion in the woods, and she goes there, taking along her live-in girlfriend and a bunch of new songs.

She’s on a lot of meds for hallucinations in which she turns into an animal. So we’ve got two storylines here: one about “cognitive behaviour” (as Michael Ironside playing the prescribing doctor put it, or werewolf tendencies, if you will), and another about predatory behaviour in the music industry. The two are meant to blend metaphorically, but don’t quite. The singer Lowell co-wrote the script to reflect what she has seen in the music business. She has the producer say you have to make a choice between being a predator or prey. But a revelation from him is far more central to what happens, and feels forced. Still, with sharp direction (in Edmonton) by Vancouver-raised Amelia Moses, there are some good chills here. And two music nominations in the upcoming Canadian Screen Awards. (Available on demand on iTunes, Bell, Rogers, Shaw, Telus, Cineplex Store and Vimeo.) 3 out of 5