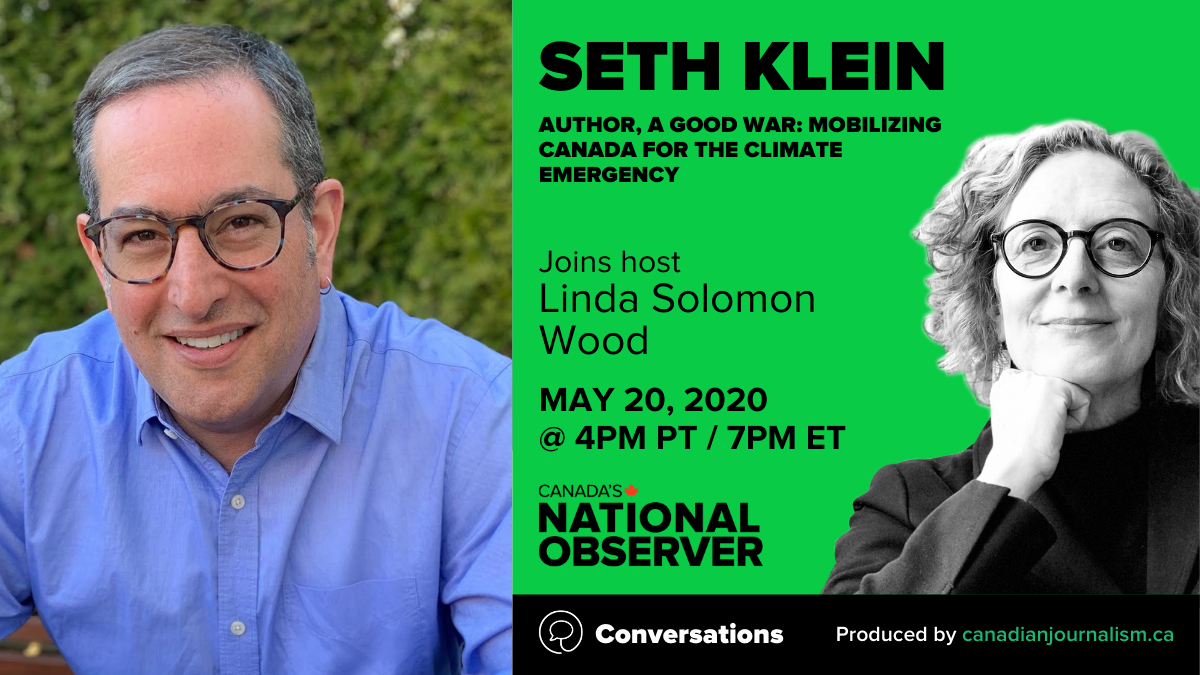 What if we treated the climate crisis like a war? How would our response to the threat change? Would we succeed in defeating the opponent?

These are the central conceits behind author and policy analyst Seth Klein’s new book, A Good War: Mobilizing Canada for the Climate Emergency. Klein argues that reckoning with the climate crisis will require a radical social and economic restructuring akin to the Canadian federal response to the Second World War. Drawing on thorough research into the country’s policy solutions during that period, Klein analyzes Canada’s upheaval and contextualizes the current moment against the tactics we employed 80 years ago to combat an existential enemy.

Luckily, the Nazis were never on our doorstep — at least in part thanks to rigorous and widespread international mobilization. The climate crisis, on the other hand, has already launched a full-on offensive here. Logic follows that if we want to push back the tide — literally — we need to adopt a similar approach. So how do we reach a unified understanding of the gravity of the situation and reinvigorate the national pulling-together of a bygone era, all while centring justice across class, race and gender?

Join Klein, along with Canada’s National Observer founder and editor-in-chief Linda Solomon Wood, for a Conversations event on May 20 at 7 p.m. ET / 4 p.m. PT. Register for the free event here, and submit your questions for Klein ahead of time to [email protected].

Klein — who is one-half of a super-sibling duo with Naomi Klein — brings with him over two decades of experience as the founding British Columbia director of the progressive think tank Canadian Centre for Policy Alternatives. Add on eight years with the BC Poverty Reduction Coalition, 10 years with the Metro Vancouver Living Wage for Families campaign and activist involvement since his high school years, and you get a picture of a deeply experienced policy analyst with a keen understanding of both social justice and structural pragmatism.

Can the Alberta NDP tell a new climate story?

Tommy Douglas was a

Tommy Douglas, ‘Father of Medicare’ talks about the use of the Bank of Canada in government finance:

"In 1937 when the CCF proposed in the House of Commons a $500 million program to put single unemployed to work, the Minister of Finance said where will we get the money? Mr. Benson asked the same question today. My reply at that time was that if we were to go to war, the Minister would find the money. And it turned out to be true.

In 1939, when we declared war against Nazi Germany, for the first time we used the Bank of Canada to make financially possible what was physically possible. We took a million men and women and put them in uniform. We fed and clothed and armed them. The rest of the people of Canada went to work. The government organized over 100 Crown corporations. We manufactured things that had never been manufactured before. We gave our farmers and fishermen guaranteed prices and they produced more food than we had ever produced in peace time. We built the third largest merchant navy in the world and we manned it.

"Luckily, the Nazis were

"Luckily, the Nazis were never on our doorstep — at least in part thanks to rigorous and widespread international mobilization. The climate crisis, on the other hand, has already launched a full-on offensive here."

The first claim is ahistorical:
Newfoundland: "Five significant attacks on Newfoundland took place in 1942. On 3 March 1942, U-587 launched three torpedoes at St. John's; one hit Fort Amherst and two more hit the cliffs of Signal Hill below Cabot Tower. In autumn German U-boats attacked four iron ore carriers serving the DOSCO iron mine at Wabana on Bell Island in Newfoundland's Conception Bay. The ships SS Saganaga and SS Lord Strathcona were sunk by U-513 on 5 September 1942, while SS Rosecastle and P.L.M 27 were sunk by U-518 on 2 November with the loss of 69 lives. After the sinkings the submarine fired a torpedo that missed its target, the 3,000-ton collier Anna T, and struck the DOSCO loading pier and exploded. On 14 October 1942, the Newfoundland Railway ferry SS Caribou was torpedoed by U-69 and sunk in the Cabot Strait south of Port aux Basques. Caribou was carrying 45 crew and 206 civilian and military passengers. One hundred thirty-seven lost their lives, many of them Newfoundlanders. Half a dozen U-boat wrecks lie in waters around Newfoundland and Labrador, destroyed by Canadian patrols."
Canada: "... the Battle of the St. Lawrence, when U-boats began to venture upriver and attack domestic coastal shipping along Canada's east coast in the St. Lawrence River and Gulf of St. Lawrence from early 1942 through to the end of the shipping season in late 1944. From a German perspective this area contained most of the military assets in North America that could realistically be targeted for attack, and therefore the St. Lawrence was the only zone that saw consistent warfare—albeit on a limited scale—in North America during World War II."
U.S. East Coast: "Several ships were torpedoed within sight of East Coast cities such as New York and Boston."
U.S. Gulf of Mexico: "Once convoys and air cover were introduced in the Atlantic, sinking numbers were reduced and the U-boats shifted to attack shipping in the Gulf of Mexico. During 1942 and 1943, more than 20 U-boats operated in the Gulf of Mexico. They attacked tankers transporting oil from ports in Texas and Louisiana, successfully sinking 56 vessels. By the end of 1943, the U-boat attacks diminished as the merchant ships began to travel in armed convoys.
"In one instance, the tanker Virginia was torpedoed in the mouth of the Mississippi River by the German submarine U-507 on May 12, 1942, killing 26 crewmen. There were 14 survivors. Again, when defensive measures were introduced, ship sinkings decreased."
https://en.wikipedia.org/wiki/American_Theater_(World_War_II)