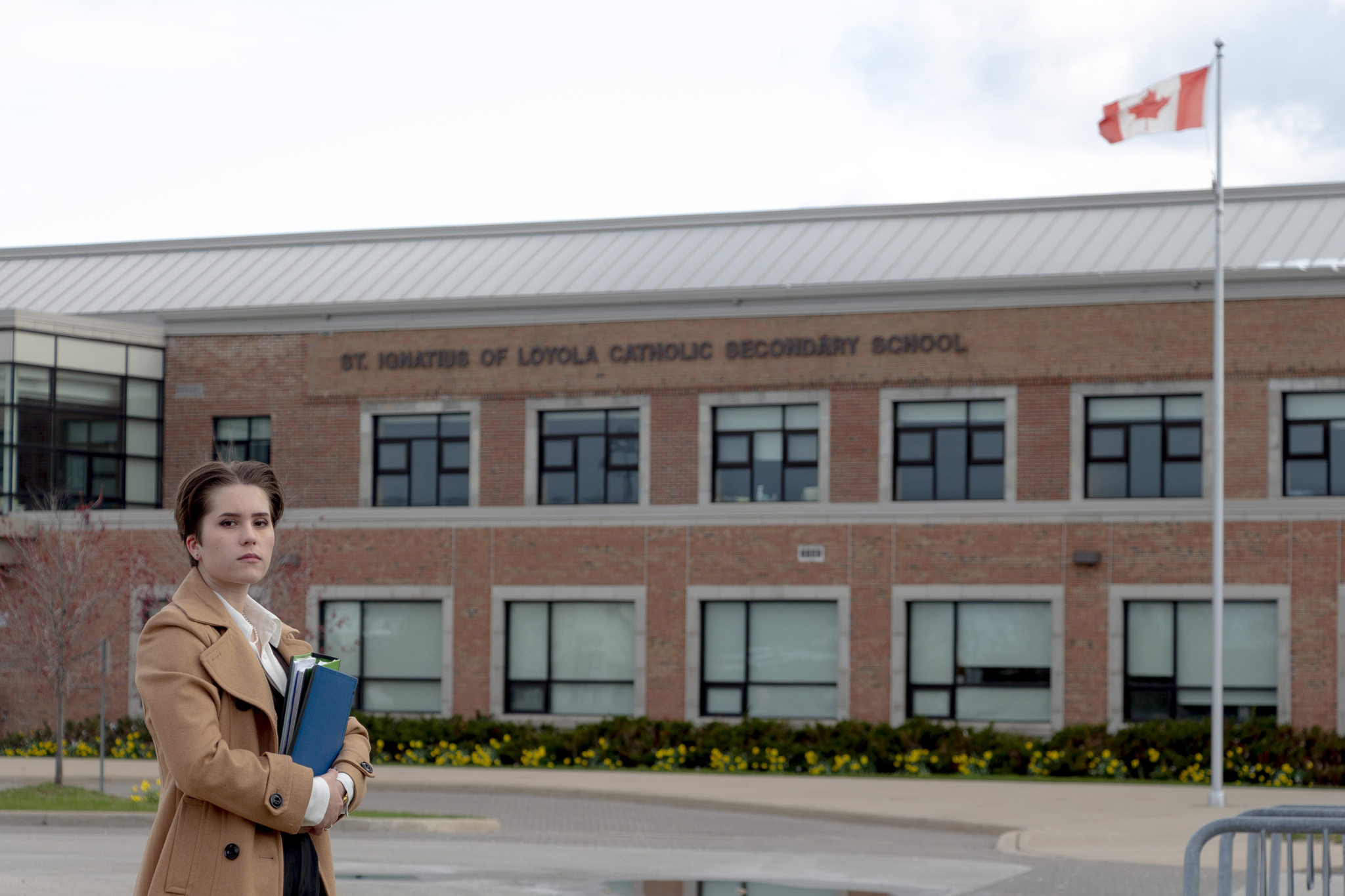 Nic Hotchkiss stands outside their school, where the Grade 12 student wants the Pride flag to fly. Photo supplied by Nic Hotchkiss
Previous story
Next story

Nic Hotchkiss didn’t feel seen as a queer student at St. Ignatius of Loyola Catholic Secondary School in Oakville, so when their class was invited to pick a social justice project to develop at the start of the school year, they asked if the school could fly the Pride flag.

While the principal was supportive, he said anything visible on the outside of the school would have to be approved by Halton Catholic District School Board, kicking off a fraught debate that this week culminated in a setback for Hotchkiss and other students, parents and teachers pushing for a more fulsome embrace of LGBTQ+ students and staff.

A motion to raise the rainbow flag during June, Pride Month, at all the board’s schools and its administrative building and to put up posters in each of the board’s classrooms declaring them safe spaces was denied after more than three and a half hours of debate on Monday night, with several trustees putting up procedural obstacles and proposing amendments that went as far as to completely erase its original wording.

"I think it is an act of cowardice" based on fear of alienating conservative Catholics, Hotchkiss said following the special board meeting, which was necessary after an earlier consideration of the motion ended without a vote.

"I think we can't view this as a difference of opinion anymore because at this point, this is just homophobia and transphobia,” Hotchkiss said. “You can't put it under a Catholic lens anymore."

While the Catholic Church maintains that sexual relations between same-sex partners is a sin, some of its laity have been increasing vocal in pushing for a more accepting approach to LGBTQ+ members of the congregation.

The Halton board ultimately agreed to recognize Pride Month — making it the 11th of 29 English-language Catholic school boards in Ontario to do so — and to put up one poster about inclusion per school. It also said it would mandate staff training and education on the topic, raise community awareness, and ensure resources and supports are in place for students in each of its schools.

The board received almost 100 letters from the community on this issue, with most expressing support for the motion and some saying it went against the Catholic board’s mission.

Kirsten Kelly, one of three student trustees at the board, worked with Hotchkiss to push the motion forward.

"I think we can't view this as a difference of opinion anymore because at this point, this is just homophobia and transphobia,” says student Nic Hotchkiss. “You can't put it under a Catholic lens anymore." #LGBTQ #PrideFlag

Kelly had already been canvassing the views of students about discrimination in its schools, receiving many comments from students who said they had to deal with homophobic and transphobic remarks from both students and staff, and were generally being made to feel to unwelcome in their schools.

The result left them feeling unsatisfied, but determined to keep pushing.

“We want to make sure that students know they are supported. Even if the ones that are sitting in power right now have shown their ugliness and have shown their bigotry and hatred, there is a greater community that loves them and supports them no matter what," Kelly said.

Advocates are now mulling next steps, with talk of asking municipalities to install rainbow crosswalks at intersections near the board’s schools and to push for parents and others to retract their financial support for the Catholic board.

(Property owners in Ontario by default support the English-language public school system via a portion of their property taxes, and can choose to instead direct it to alternatives, including Catholic and French-language boards.)

Kelly's submission to the meeting on Monday night was also their first public acknowledgment that they are themself a part of the LGBTQ+ community, something they had only previously shared with close friends and family.

"Many people in my community are marginalized, and they don't have someone in power that they can look up to. And I'm not just an ally, I'm actually part of the community, and that's why I decided to publicly announce that," they said.

Kelly said they also disclosed that fact to show trustees opposed "there is someone who is a devout Catholic, who's a student leader, who's an advocate and also a member of the 2SLGBTQ+ community, and I can be all four simultaneously."

It's not so much an act of

It's not so much an act of cowardice as an act of Catholicism. In any religion there is this tension--on one hand, religions are social institutions that are part of the fabric of society, and as such should change with the times and their ethical orientation should respond to society's sense of what's right and wrong.

And on the other hand, religions are proclamations of immutable truth--in the case of monotheistic religions, immutable truth as laid down by some unchanging, perfect supreme being. As such, they cannot change, and if modern progress in moral thinking puts it at odds with the ideas of a bunch of herdsmen thousands of years ago, too bad for modern moral progress. If you take that aspect of religion seriously, and you're either gay or believe in LGBTQ+ rights, you probably shouldn't be a Catholic.

How modern religions resolve that tension, with relevance and common decency on one hand, and the heart of belief on the other, is always going to be tricky. However, precedent suggests that relevance is ultimately more important--Christianity embraced the idea that blacks were inferior during the era of slavery, but it's been a while since I heard of a Christian claiming that non-whites were descendants of Ham.

Cowardice. Hmm....
How unfortunate - the stories about Christ do not suggest he was a coward.

The earliest Christians evidently were not cowards, - fatalists maybe, in the face of the lions

Christianity only exhibited cowardice once it had wealth and property, power and pomp at stake.