Epicurious swore off beef. Is it time to rethink what we eat? 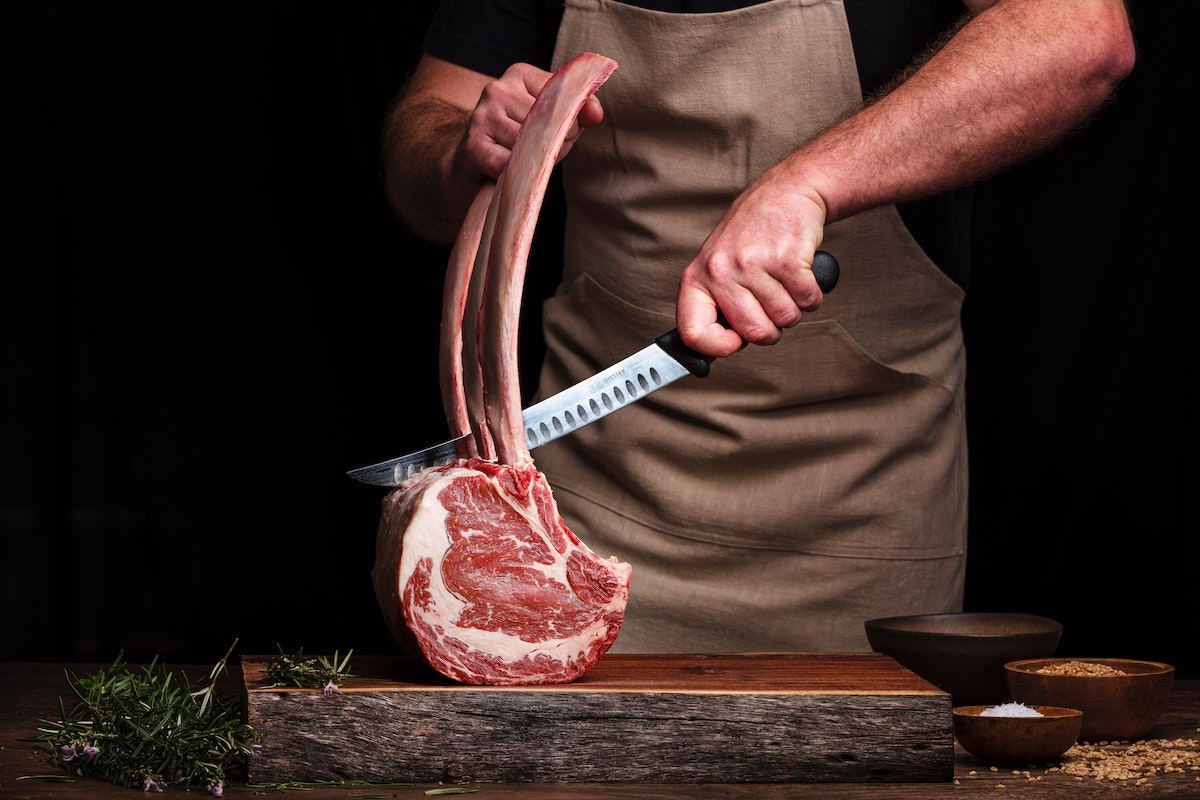 At some point, we have to find a way to reckon with our relationship with meat, Max Fawcett writes. Photo by Madie Hamilton / Unsplash
Previous story
Next story

If at first you don’t succeed, try, try again. That seems to be what Epicurious was thinking when it announced this week it was cutting beef out of its digital diet. The popular food and recipe website’s pronouncement was greeted with the entirely predictable howls of outrage from beef producers and freedom-loving conservative culture warriors across North America. After all, Epicurious actually made the move more than a year ago and hadn’t published a new recipe featuring beef since early 2020. But given that it appeared to go mostly unnoticed, they reiterated the choice earlier this week.

“Our shift is solely about sustainability, about not giving airtime to one of the world’s worst climate offenders,” former digital director David Tamarkin and senior editor Maggie Hoffman wrote. “We think of this decision as not anti-beef but rather pro-planet.”

As it happened, that particular climate offender was already getting plenty of airtime. The Fox News misinformation machine was deep into the throes of an invented scandal about beef, one that claimed Joe Biden wanted to reduce beef consumption in America by 90 per cent. As congressional freshman and QAnon enthusiast Lauren Boebert tweeted, "They want to limit us to about four pounds a year. Why doesn't Joe stay out of my kitchen?"

Texas Gov. Greg Abbott, former Trump administration economic adviser Larry Kudlow and Fox host John Roberts were among those who conscripted themselves into this non-existent war on beef, although Roberts was later forced to admit the Biden administration actually had no such plan.

The offending figure, it turned out, was from a 2020 study that modelled what sorts of dietary changes would be required to reduce our collective carbon footprint. That study was weaponized by the Daily Mail and linked to Biden’s recently announced climate plans, despite the fact the actual study in question was done when Donald Trump was in office.

"The study shows that if we eat less meat, especially beef, we could substantially reduce our dietary carbon footprint,” lead author Diego Rose told the Austin American-Statesman. “But that change in behaviour is a choice that individuals will make."

It’s not one that will come easily. There’s no question eating less red meat is good for the climate, although the degree to which it’s helpful depends on a number of different factors. Grass-fed beef, for example, has much lower greenhouse gas emissions associated with its production than the kind of mass-scale factory farming that has destroyed much of the Amazon rainforest. And while methane emissions associated with cattle farming are the leading driver of beef’s climate costs, experiments with using lemongrass and seaweed as feedstock are showing promising results.

Other sources of protein, meanwhile, have their own associated greenhouse gas emissions, even if their emissions per calorie are smaller. But there should be even less question about the beef industry’s willingness to fight back against any effort to curb consumption. In 2016, Earls replaced its Prairie suppliers with a so-called “Certified Humane” source in Kansas — and then spent the new few months dealing with the blowback.

At some point, though, we have to find a way to get past those hurt feelings if we’re going to meet the climate targets being set on our behalf right now. It’s tempting to think we can let corporations and governments do the heaviest lifting, and that our preferences and priorities can remain unaffected.

As @epicurious cuts beef from its digital diet and conservative culture warriors cook up a scandal over steak, we have to find a way to reckon with what our diet does to the planet, writes columnist @maxfawcett.

But that’s no more realistic than eating hamburgers every day for dinner and hoping that you don’t keel over from a heart attack before the age of 50. Choices have consequences, even if we’re not necessarily the ones who will feel the brunt of them on something like climate change. And while we’d all like to have our metaphorical steak and eat it, too, the climate math gets pretty ugly when billions of people are all doing it at the same time.

I’m hardly without blame or guilt here, by the way. I’ve started so-called “meat clubs” — that is, semi-regular gatherings at meat-oriented restaurants of repute — in no fewer than three cities over the last decade, and the very thought of a fatty cut of brisket is enough to set my mouth watering. To me, the idea of giving up red meat seems a lot like the idea of giving up oxygen or sleep, neither of which I routinely entertain.

But I can’t ignore the math when it comes to climate change here, or my responsibility to do something to improve it. Until we all get a bit more serious about making different choices in our lives, we’re going to continue narrowing the range of choices available to those who will come after us.

The issue isn't so much about

The issue isn't so much about yes or no but how. How beef is raised and the land utilized. There are sustainable methods but it means irradicating factory farming.

A good documentary to explore is "sacred cow".

I agree that the issue isn't

I agree that the issue isn't so much about yes or no but how much as well as how. Currently, factory farms represents about 98% of the meat eaten. So if we eradicate factory farms, that would be good on many levels - lots less animal suffering, and it would likely mean that we could stop deforesting the planet for grazing cattle or growing soybeans to feed to cattle. Beef is a leading cause of deforestation. Eradicating factory farms would mean that there would be a lot less beef available for people to eat. I think that would be good for both planetary and human health. Yes, it's a culture shift, and I appreciate all the people who are making steps towards eating less animal products. If one feels that they can't switch away from all animal products, then the best first step is to replace beef with other meats, since the environmental impact of beef is worse than other animal products. In turn, the environmental impact of animal products is much worse than plant products, in general. The Oxford Study from 2018 illustrates this well. Here's a Guardian article describing the study: https://www.theguardian.com/environment/2018/may/31/avoiding-meat-and-da...

I might embrace a vegetable based diet (I have nothing against most vegetables) except that health issues already restrict my diet - and most particularly makes me avoid precisely those vegetables that appear most frequently as substitutes for meat.

I look forward to "lab" produced meat that could obviate the horrors of factory farming of live animals and the equal traumas of the slaughterhouse and meat packing industry. Alas, I shall not live long enough to see this come to pass!

I'm a retired surgeon and a

I'm a retired surgeon and a fourth generation farmer in southwestern Ontario. This year I completed the first year of a diploma in agriculture at the University of Guelph; one of my research papers related to this question. The evidence regarding greenhouse gas emissions and beef production is more complex than Max's article suggests. First of all, the CO2 emitted by cows is the same as the CO2 emitted by humans: it all came from the atmosphere and was converted by plant photosynthesis to carbohydrates. The final product of carbohydrate metabolism is CO2, which returns to the atmosphere. Net zero there. The difference between cattle and people is that, as ruminants, cattle are able to digest cellulose and other carbohydrates that we humans can't. The archaea in their rumens also produce methane, which is a problem. Methane is much more effective as a greenhouse gas than CO2, but it is much shorter-lived, with a half life of 12 years, compared to 100 for CO2. Most countries (except for the US and Argentina) are on a downward trend for beef intake and I agree that's a good thing. Globally, about a third of beef's GHG footprint comes from deforestation, so please don't eat beef from Brazil. Feedlot production accounts for most beef production in my home province (Ontario), so it's essential that producers of grains like corn and soybeans that are used as cattle feed, be cognizant of their carbon footprint as well. Happily, the federal budget is making that a priority, encouraging farmers' efforts to reduce the emissions (N2O and CO2) associated with grain production.
As I said, there's much more to this issue than Epicurious knows.

Cattle and goats and sheep

Cattle and goats and sheep "may safely graze" on marginal land that is too rocky or hilly to cultivate but is thus productive of grasses and mosses and the like. It is only during the last stage of their lives that the factory farm paradigm kicks in and they are fattened up for market with grain. So don't blame meat. Blame capitalism.

Dryland crop production in Canada is actually as much or more a factory farming situation than beef production. I don't understand why crop farming seems to get a by so often when it comes to it's detrimental climate change effects . Monocultures, pesticides, cultivation and erosion are huge problems that are hurting our environment and blaming beef is not going to help. The beef industry needs to make a lot of improvements but no more so than any other industry.

It make me sad that writers

It make me sad that writers don't look into this with a more open mind. This is a much more complex subject than Max Fawcett seems to realize.

Blame the food and not the

Blame the food and not the unsustainable, money grubbing way it is produced. Industrial farming of anything - even almonds - is highly damaging to the environment. Out of control capitalism is to blame. When I do buy beef I only buy what is produced by local farmers. It's expensive so I don't eat a lot of it, but . . . that's the point.