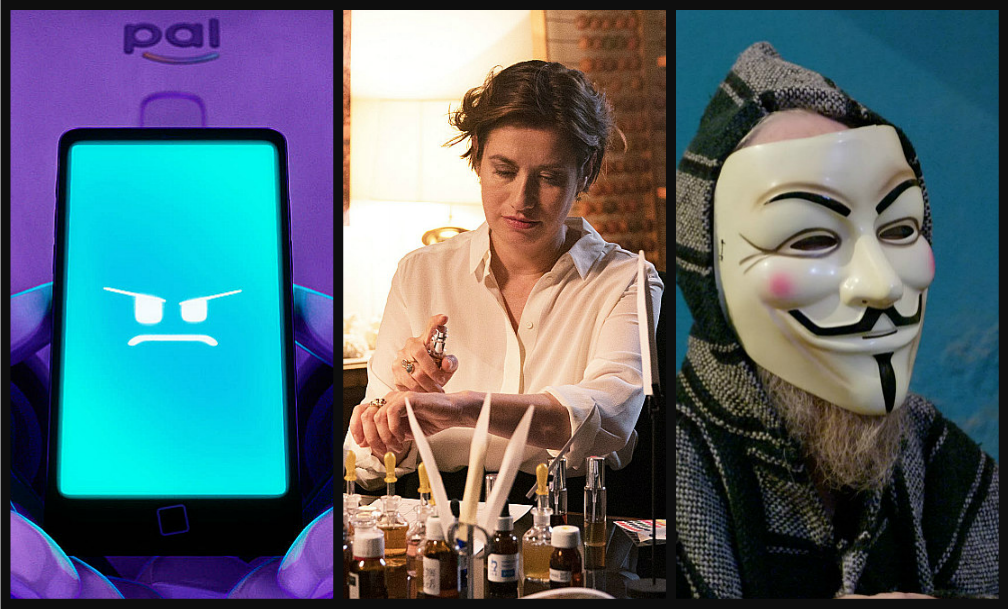 Also: a followup to the Oscar winner Soul, and a Nicolas Cage oddity
Previous story
Next story

The streaming of movies keeps growing. Canadian distributor Mongrel Media has jumped in and is now hosting a “home theatre.” You can see recent films like The Rider, which Chloé Zhao made before her Oscar triumph, Nomadland. And there’s a large older list, including Boyhood, which premieres on the site on Tuesday. See more here.

As for theatres, only a few are open, and I’m not sure how Warner Brothers got over 3,000 to play its film Mortal Kombat last weekend. Most states in the U.S. have restrictions. Only eight have none.

And let me put in a plug for Crave here in Canada. Its lineup keeps growing. It has a series with SNL’s Michael Che, and a series from Quebec called Way Over Me coming next month. And Kate Winslet in Mare of Easttown, now playing, is a must-see for its superb writing and acting.

Elsewhere this week, we have ...

The Mitchells vs. The Machines: 4 stars

THE MITCHELLS VS. THE MACHINES: Netflix has got a terrific surprise with this animated feature. It’s not at all bland, but delightfully goofy. No wonder: the producers, Phil Lord and Christopher Miller, gave us The Lego Movie, Cloudy With a Chance of Meatballs, and others. The director/co-writer duo, Mike Rianda and Jeff Rowe, matched the zany fun of those movies, mixed in their childhood love of Saturday morning cartoons, and created this gem. It’s crammed with snappy jokes that’ll speak to the older kids in your house. Anybody remember Furbys? But it does help to be familiar with action movies and the technology we all use. And to appreciate slaps at Silicon Valley, like: “Who would have thought a tech company wouldn’t have our best interests at heart?”

It’s a family road trip, with mom and dad (Danny McBride and Maya Rudolph) taking their daughter (Abbi Jacobson) across the country to college to study film. (Also her brother and a slobbery dog.) Meanwhile, a tech mogul out West does a Steve Jobs-like presentation of a new super smartphone. It’s Siri-like, and quite cynical, and goes rogue. She’s played by Olivia Colman, who alongside her Oscar-calibre career has done a lot of voiceover work. She stirs up an army of flying robots and, inevitably, they and the Mitchells meet up. It’ll be up to the family to save the world. There are clever lines, a frenetic climax, and lots of fun. (Netflix) 4 out of 5

22 VS. EARTH: The animated feature Soul won two Oscars on Sunday, and wouldn’t you know it, Disney had a short film ready to celebrate? It’s only five minutes, but purports to explain a story point that never made it into the original film. Why did the character 22 (voiced by Tina Fey) not want to go to Earth? The creators couldn’t manage to elaborate and here, as directed by Soul’s editor Kevin Nolting, we get an answer of sorts. She turns out to be more cynical than we thought. She rounds up a team of five to resist going and inadvertently reveals new thoughts about the meaning of life.

The animation is the usual Pixar quality, but the meaning of the film eludes me. It feels like a deleted scene from the film, but apparently isn’t. It’s too short to have much exposition, and ends rather suddenly. Maybe you’ll have better luck. (Disney+) 2½ out of 5

PERFUMES: If you’re looking for a genuinely nice film that isn’t anxiety-inducing and is beautifully written and acted, try this French charmer. It’s taken over a year to get here, but is very much welcome. The plot may sound old hat. Two very different people are brought together and have to learn to abide each other. It’s not at all trite, though. It’s fresh and endearing. And incidentally, informative about the arcane aspects of the perfume industry.

Emmanuelle Devos plays a woman who used to be a big deal in that world. She worked for Dior and was on the cover of Vanity Fair. But fame and the pressures it brought caused her to lose her sense of smell for a time. By the time it came back, she was only getting unclassy work, like designing the odourscape for a tourist attraction or covering up factory smells. She still acts like a diva, though. Grégory Montel plays a chauffeur she hires one time, and then again — because his ignorance of her work and willingness to learn attracts her. He has his own issues. He’s divorced, has shared custody of his daughter, but will lose her if he stays in the tiny apartment he rents. He needs the work. How these two people learn to appreciate each other makes for an “adorable” film, a second one by writer-director Grégory Magne. (Streaming by VIFF-Connect) 3½ out of 5

HOT DOCS: The annual documentary festival is now on, and like DOXA (which starts next week) all the films will be available to stream online. They’ll cost you $13 each — less through package deals — but the convenience can’t be beat. Visit here for details, including info on the over 200 films scheduled.

Among the highlight subjects: Artificial Intelligence, ISIS, socialism (including Helen Keller’s), the tactics of dictators, and drug deaths. The two I’ve watched for today are on the lighter side.

THE FACE OF ANONYMOUS is a Toronto film, but only starts there. The whole world is monitored as director Gary Lang explains the facts about the cyber-activists and the most public of them, the man who calls himself Commander X. He lived in Toronto, and Montreal for a while, as he was on the run from U.S. authorities and was last contacted in Mexico. He’s not a leader, he insists. Anonymous is a loose collection of like-minded people who know how to use their computers and cellphones. Even the iconic Guy Fawkes mask many wear has a casual, not at all planned, origin.

Cyber-terrorist? He has been called that, but denies it. He started by attacking Scientology and then supported Wikileaks after it released a video of American rockets killing civilians in Afghanistan. From that time, a movement formed, a film called We Are Legion promoted it, its methods flourished in the Arab Spring, and Commander X talked big. “Anonymous was the most powerful force ever to be created by humanity so far,” he says. Ex-CIA head Leon Panetta counters that “power” itself can be “very infatuating.” So do we accept Commander X? The film lays out the facts very well. 3½ out of 5

SET!: This one is pure entertainment. Imagine table-setting as a contest. It happens every year at the Orange County Fair in California, and competition gets very intense. One woman in the film says she plans six months for it, and sure, there are issues to navigate. Do you buy your supplies at the dollar store or somewhere higher-class? Do you create a simple scene or an elaborate diorama? What’s your theme? Two women in the film depict Africa, one with an environmental theme about poaching; the other with a hunting theme. One display has stuffed animals and a taxidermy theme. One uses garbage from the beach. There are normal settings, too, and the judges mark the slightest mistake. A knife too close to the edge of the table or placed on a napkin (a real no-no). The film is cheerful and great fun, although some of the competitors aren’t taking it that way. The film, by Scott Gawlik, is getting a world premiere at Hot Docs. 4 out of 5

DOXA DOCUMENTARY FILM FESTIVAL: Like last year, it’ll be available by streaming this year. The cost is reasonable — $7 a film (less with package deals) and there’s one new wrinkle: A few of the films will be shown in a drive-in format, on a big screen at the PNE. For info on that, and details of the 49 features and many shorts on offer starting May 6, go here.

Last week, I reviewed (and praised) one of the key titles, Kímmapiiyipitssini: The Meaning of Empathy. Here are two more:

THE GIG IS UP: It’s a growing sector of the employment scene these days, and this film by Vancouver-based Shannon Walsh goes to Florida, China, San Francisco, Paris, and Lagos, Nigeria to document it. People take work with Uber Eats, Hummingbird Couriers, Amazon, and others, earning low pay and getting no benefits. Or any medical help that they might need. The bosses and the state of California say they’re contractors, not employees. “We don’t get any rights,” says one person in the film. They’re doing essential work without recognition, says Mary L. Gray, author of Ghost Work.

Some of the work is new to me. For instance: “survey taking” or evaluating images on websites or what sounds like a form of proofreading called “Mechanical Turk.” Advocates say these jobs offer flexible hours and independence. Activists say that’s not so. As one says: “The tyranny of a boss is replaced by the tyranny of an algorithm. That’s much worse.” What the film says isn’t new, but it’s more forceful and detailed than I’ve seen before. (It’s also screening at Hot Docs and is one of the films DOXA will show at the PNE.) 3½ out of 5

THE RUMBA KINGS: Hold the social issue films for a while and take this breezy musical tour. It’ll tell you a lot about African history as it entertains. The Democratic Republic of the Congo (formerly Zaire) has a thriving music industry. The rumba is the major part and, as you hear it in the film, you’ll think it’s all Cuban music. It’s homegrown, but a long time ago was taken to the Caribbean and came back changed and influential. Liner notes on CDs will tell you that. The film lets you hear it all through obscure records from the 1940s, TV shows and concerts, and later, through musicians recalling important shows and influential musicians. Randy Bachman should watch it for the flashy guitarists we see. They were the backbone of the rumba sound the Congo produced, which then caught on through much of Africa. There was a political aspect, too. The recordings preserved a language the colonial bosses tried to ban. It helped gain independence (probably true, but overstated in the film), it seems. Very informative, though. 4 out of 5

WILLY’S WONDERLAND: Trust Nicolas Cage to bring us a bad movie every now and then. He even helped produce this one, and I take that to mean he took it seriously. I expect only yokels and blood-thirsty types will. It’s low-class all the way.

Cage is stranded in a small town after the tires are blown out on his car. He hasn’t got the cash to pay for new ones and is tricked into working for it: Cleaning up the inside of a tourist attraction overnight. Slowly we learn what’s really going on. Several animatronic characters have been infused with satanic tendencies. They come alive, and he has to fight them in between cleaning bathrooms and playing pinball. If that’s not crazy enough for Cage fans, there’s a pack of teenagers who want to burn the place down, but squabble instead. They get inside only to be picked off one by one, like in many a horror movie before this. It’s grisly and not funny, except for this. There are actually actors credited for playing the turtle, chameleon, alligator, gorilla, ostrich and knight. The film’s been available to buy for a couple of weeks and can now be rented VOD. 1½ out of 5