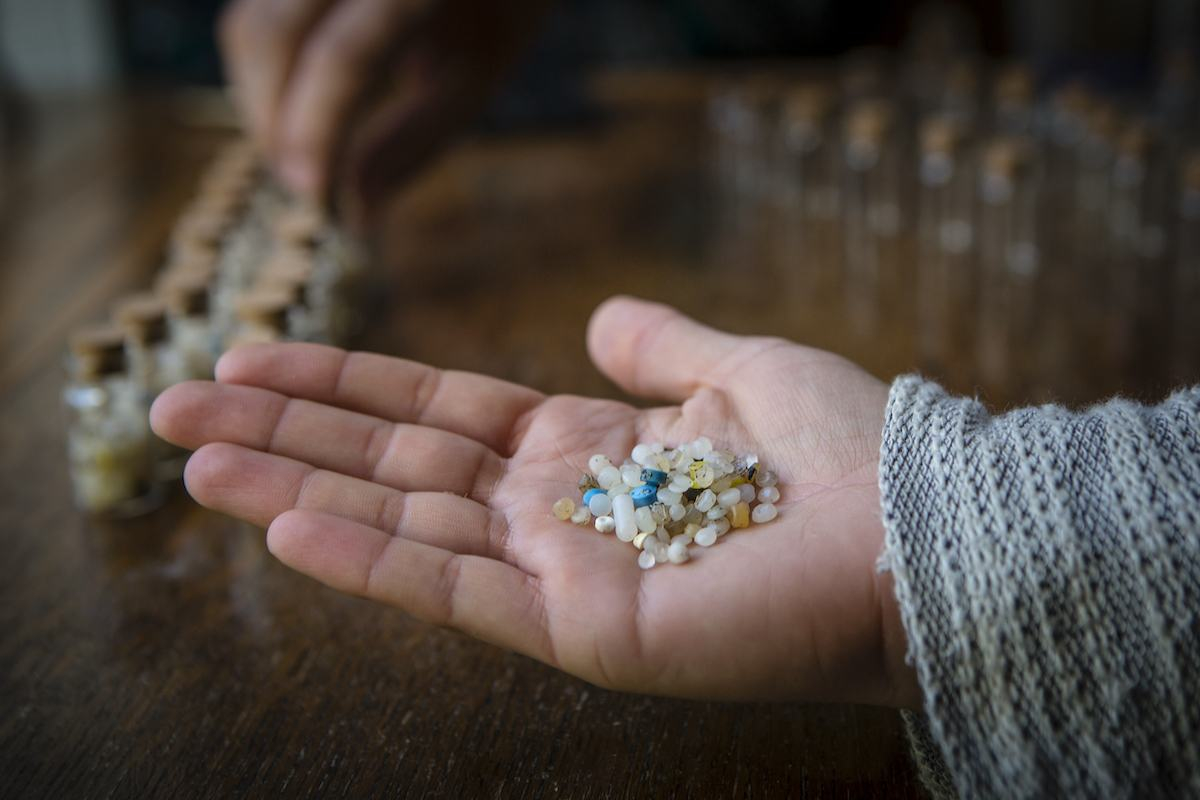 About 10 trillion plastic pellets are leaked into the environment each year, polluting waterways worldwide. Photo by Kajsa Sjölander / Greenpeace
Previous story
Next story

Investors are forcing the world’s biggest plastic manufacturers to reveal how many harmful plastic pellets they are leaking into rivers, lakes and oceans worldwide.

Factories, trains, ships and trucks spill about 10 trillion of the lentil-sized pellets, or nurdles, used to make all plastic products, into the environment each year — enough to make roughly 15 million plastic bottles. Once in aquatic environments, pellets absorb toxins in the water, becoming poisonous magnets for birds, fish and other animals.

Pellet contamination is widespread around B.C.’s Lower Mainland, according to a 2019 study by University of Victoria researchers and the Surfrider Foundation. They’re also a major problem in the Great Lakes and other regions with high concentrations of plastic manufacturing or transportation infrastructure.

International chemical company DuPont last week announced it will start publicly reporting how many pellets it loses each year, joining several other major plastic producers. The move comes after most shareholders voted for the disclosure against company wishes — a decision that can help expose the plastics industry’s outsized role in the plastic pollution crisis.

“The more activities — no matter what they are — that remind people plastic comes from industry and literally nowhere else, the better,” said Max Liboiron, a professor of geography at Memorial University who studies plastic pollution. “(Plastics) only come from one place, and anything we can do to (push accountability) back up the pipe is valuable.”

About 4.6 million tonnes of raw plastic are produced in or imported to Canada each year, according to a 2019 report commissioned by Environment and Climate Change Canada. Then it is transformed into everyday items like cups or canoes, likely destined for a landfill or the oceans: only about nine per cent of Canada’s plastic waste is recycled.

Pellets under five millimetres are regulated under Canada’s environmental laws, and spills are supposed to be reported to the proper provincial or territorial environmental agency.

Yet despite growing concern about the plastic crisis, pellet pollution has retained a relatively low profile.

In 1991, facing pressure from the U.S. Environmental Protection Agency, the plastics industry worked with the agency to create an industry best-practices program — Operation Clean Sweep — that has been accused of being created to fend off regulation. Companies that join the program, including DuPont, are required to install special equipment and promise not to lose any pellets. They’re not required to keep or report data on pellet spills, according to a 2020 NPR investigation into the program.

Investors are forcing the world’s biggest plastic manufacturers to reveal how many harmful #plastic pellets they are leaking into rivers, lakes and oceans worldwide. #pollution

While the program’s implementation does correlate with some environmental gains — ornithologists worldwide have seen significantly fewer pellets in seabirds since the 1980s — pellet pollution has recently taken on a new prominence, says Kelly McBee, waste program co-ordinator for As You Sow. The environmental organization works with shareholders to make companies more sustainable and played a key role in pressuring DuPont and five other major petrochemical companies to reveal their pellet pollution data.

So far, only three of the five — Chevron Phillips Chemical, Exxon and Dow — have started to make their reporting publicly available, As You Sow said in a statement.

“DuPont is committed to transparent reporting on sustainability and environmental matters,” said Daniel Turner, a spokesperson for DuPont in a written statement. “We are taking action at our facilities to avoid pellet spills, increase plastic recycling and prevent plastic waste from entering the environment.”

McBee is relieved to see even a modicum of transparency on the issue, though it is far too late, she explains.

“We were really shocked to see that after almost three decades of operation (companies) had no reporting on how effective their programs had been, they had no auditing process to determine if it was actually being implemented in practice,” she said.

The companies’ commitments to reporting spill data is a good start, she explains — not a solution. There are no independent, third-party audits of plastic spills nor internal audits on the best practices’ effectiveness.

Furthermore, the new shareholder resolution only covers spills in manufacturing facilities. They will not cover the sinuous path plastics take between the petrochemical plant where they are produced and the factory where they are turned into consumer products, she notes.

“There’s a consistent problem where, when the polluter is providing its reports, there’s always the question of accountability, how metrics are made (because they’re) often considered proprietary, so you never get to check the validity,” they said. “In a lot of industries — especially petrochemical industries, of which plastics are a part — there’s very often a discrepancy between reported figures and the experience of fence-line communities.”

It’s a discrepancy evident on the B.C. coast, David Boudinot, plastic pellet researcher with the Surfrider Foundation’s B.C. chapter, said in an email. Pellets are increasingly common on the province’s beaches, particularly those on the Salish Sea, and the organization has seen spills at plastic manufacturing facilities along the Fraser River. Reporting, preventing and mitigating the spills largely falls on the manufacturers or shipping companies transporting them, he said.

The B.C. Ministry of Environment said in response to the organization’s 2019 study that it hadn’t received reports of pellets entering waterways.

For Liboiron, more data on pellet pollution is a good start, if only because it highlights plastics’ environmental dangers.

“(This) just brings plastics up to snuff with the baseline expectation of accountability for emissions from other types of chemicals and pollutants,” they said.