How Australia fudged the numbers at U.S. climate summit 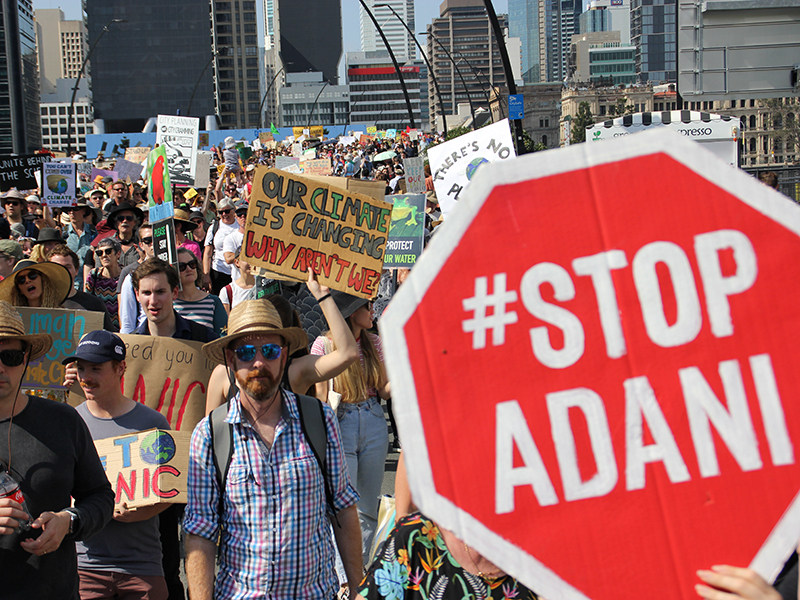 Protesters in Brisbane, Australia, participate in a global climate strike in September 2019. Photo by Stephen Hass / Flickr (CC BY 2.0)
Previous story
Next story

President Joe Biden’s recent climate summit was a challenge to the rest of the world to step up its game. And despite the irony of the U.S. throwing down the gauntlet after four years of hostility to climate action, a few countries rose to the challenge: Japan, Canada and Brazil upped their emissions-reduction targets, while the U.K. and the E.U. finalized new targets ahead of the summit. India announced a new investment partnership with the U.S. South Korea pledged to end public financing for overseas coal projects. Even Russian President Vladimir Putin came to the summit with a promise to “significantly reduce” his country’s emissions.

“Australia is on the pathway to net-zero,” he announced. “We are well on the way to meet and beat our Paris commitments.”

For proof of Australia’s progress, Morrison cited two numbers: His country had reduced emissions 19 per cent since 2005 — 36 percent if you discount exports. Australia, he said, is one of the few countries that’s still on track to meet its target under the Paris Agreement, which is to cut overall emissions 26 per cent compared to 2005 levels by 2030. On its face, that assertion is true. But Australian climate policy experts say Morrison’s numbers are basically completely made up.

“It’s deeply deceptive,” Robyn Eckersley, professor in political science at the University of Melbourne and author of multiple books on Australian politics, told Grist, referring to Morrison’s assertion that Australia had cut emissions 36 per cent. That number excludes not just exports themselves, she said, but all emissions associated with producing fossil fuels for export, like the fugitive emissions — leaks and other irregular releases of greenhouse gases — that are produced in the process of digging up coal, extracting gas via fracking, liquifying natural gas and other fossil fuel development. The countries that import those fossil fuel products aren’t putting the emissions produced by extracting and exporting those products on their climate ledgers. So who claims them, if not Australia?

“We have the economic benefit from these industries,” Frank Jotzo, director of the Center for Climate Economics and Policy at Australian National University, told Grist. “We will have to wear the emissions that happen in the actual production of those fuels.”

The 19 per cent number is misleading, too. Australia’s emissions dropped around 10 per cent during the COVID-19 pandemic last year, which is when Morrison elected to assess Australia’s progress on reducing emissions. But those emissions have largely bounced back now. Eckersley called it a “standard case of cherry picking.”

There’s a difference between saying you’ve already made climate progress and actually making progress. Nowhere is that more obvious than in Australia.  #LeadersClimateSummit #ClimateAction

Jotzo pointed out that Australia is likely to meet its existing Paris target without any new climate policies being passed. Old coal-fired power plants are closing down across Australia and being replaced by wind and solar power because renewable energies are getting more competitive. Cars are getting more efficient as technology advances. The nation’s six states and two territories have passed their own climate policies aimed at reducing emissions, similar to what some U.S. states did under former president Donald Trump. All of those things combined will help Australia achieve that 26 per cent reduction in emissions by 2030.

The emissions reductions that Australia has logged so far, Jotzo said, are almost entirely attributable to land use change. Australia has mostly stopped clearing vast amounts of land for agriculture and industry use, thanks to state-level policies. “If you set that aside, all other emissions combined are about the same now as they were in 2005,” he said.

Sofia Gonzales-Zuñiga, a climate policy analyst at NewClimate Institute, an organization that tracks the world’s climate progress with a tool called the Climate Action Tracker, says Australia is lagging behind other developed countries.

“Japan, the U.S., the E.U., they’re all stepping up their actions, they’ve shown bigger commitments,” she said. “And then you have Australia.”

Countries are supposed to update their targets under the Paris Agreement every five years, but Morrison has not increased Australia’s target under the Paris Agreement since it was set in 2015. By comparison, Japan, whose goal was previously identical to Australia’s, just upped its target to 46 per cent by 2030 compared to 2013 levels. Canada said it would slash emissions between 40 and 45 per cent compared to 2005 levels by 2030, up from 36 per cent. Brazil’s Jair Bolsonaro — an ardent opponent of environmental regulations — pledged to reach net-zero emissions by 2050. Morrison can’t even commit to that far-off goal. He said Australia will reach net-zero “preferably by 2050.” That leaves a lot of room for interpretation.

Australia could vastly reduce its emissions with better national policies in place. It has enormous wind and solar development potential. But instead of becoming a clean energy superpower, Australia’s government is doubling down on its immense trove of fossil fuels. “One has to develop a black sense of humor,” Eckersley said. “Otherwise you’d wake up and weep every morning.”

Morrison’s performance at Biden’s climate summit may have been exceptionally misleading, but he’s not the only world leader blowing hot air. Biden is determined to prove to the world that “the U.S. is back,” but he has no real strategy to slash emissions more than 50 per cent by 2030 compared to 2005 levels, as he has promised. Biden’s only climate plan right now is a $2-trillion infrastructure plan aimed at fixing the nation’s ailing infrastructure and creating a bunch of green jobs.

U.S. climate experts say that plan isn’t guaranteed to produce the emissions cuts Biden needs. Eventually, Biden will have to ease up on the carrots — green jobs, funding for clean energy technologies, wind and solar energy credits — and start pulling out the sticks — a federal emissions cap on emissions or a federal emissions trading system.

In the meantime, though, Biden’s pledges alone could be enough to inspire Australia to up the ante. “What comes out of Washington now is a really big factor in Australia,” Jotzo said. “The U.S. is hands down Australia’s most important international partner.” Before Biden took office, anyone opposed to new climate policy in Australia could defend their position by pointing to the Trump administration’s policies. That’s no longer the case.

Eckersley thinks Australia will keep twiddling its thumbs until the U.S. and other major world powers realize that it’s not responding to peer pressure and start exerting other kinds of leverage. Biden has already floated the idea of a border adjustment tax on imports from countries that aren’t doing enough to curb emissions. Such a policy would be aimed at leveling the playing field in the international trading system, something global leaders have said is a crucial piece of the climate action puzzle. Europe and the U.K. are considering levying a border adjusted tax on imports, too.

“Australia is out on a limb,” Eckersley said. “It’s very cold out there, it’s very lonely. People are going to start getting very tired of Australia.”