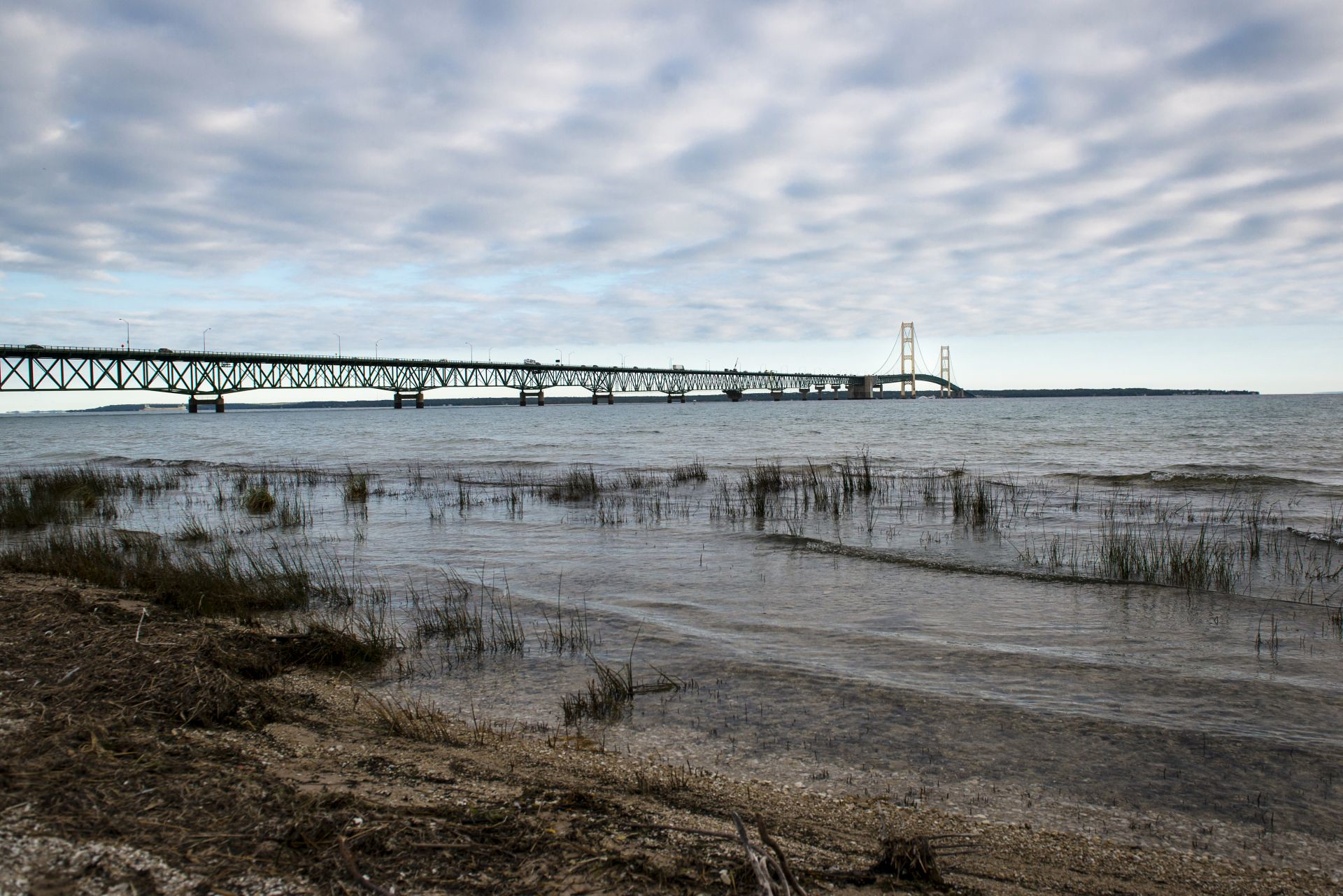 The Mackinac Bridge across the Straits of Mackinac in 2015. U.S. Coast Guard photo by Christopher Yaw
Previous story
Next story

Native American tribes say the risk of an oil spill from the Line 5 oil pipeline poses a “grave threat” to their right to hunt, fish and gather in northern Michigan and the Great Lakes.

Michigan’s 12 federally recognized tribal governments — which are sovereign nations that provide services such as health, education and court systems to members — have been concerned for years about the pipeline that crosses the Straits of Mackinac, which they describe as a “sacred wellspring of Anishinaabe life and culture.”

Several of the nations say they have fished the waters of the straits “since time immemorial,” and that the straits remain critically important for tribal fishers in the region, connected with cultural and spiritual practices and as a way to pass down teachings through generations.

The Bay Mills Indian Community, Grand Traverse Band of Ottawa and Chippewa Indians, Little Traverse Bay Bands of Odawa Indians and Nottawaseppi Huron Band of Potawatomi are all backing Michigan in a court battle against Calgary-based Enbridge, which operates Line 5.

The nations say the straits, and its natural resources, fall within an area defined in an 1836 treaty with the United States that saw the Odawa and the Chippewa cede millions of hectares of land and inland waters in Lake Michigan, Lake Huron and Lake Superior to the U.S. government.

“The tribes only agreed to this vast cession of their ancestral home upon assurance that they would have the continued ability to exercise their inherent rights, reserved unto themselves by the treaty, to hunt, fish, and gather throughout the ceded territory,” reads a court briefing submitted by the nations.

Those treaty rights are threatened by the risk of an oil spill from Line 5, they said, because the existence of the treaty rights “depends on underlying resources, such as clean water and plant habitats to support fish and game.”

As a result, such a spill “poses a grave threat to their right to fish, hunt and gather in the ceded territory and to the natural environment needed for fish, other animals, and plants to thrive,” they wrote.

In November, Michigan Gov. Gretchen Whitmer ordered the company to cease pipeline operations in the straits by May 12, 2021, arguing in part that because the pipeline lay exposed at the bottom of the straits, a key shipping channel, it was vulnerable to impacts and posed an “unacceptable risk of a catastrophic oil spill.”

Michigan’s federally recognized tribal governments have long been concerned about the risk of an oil spill from the #Line5 pipeline that crosses the Straits of Mackinac, which they describe as a “sacred wellspring of Anishinaabe life and culture.”

Michigan’s attorney general filed a lawsuit in state court seeking to enforce that decision. But Enbridge — which wants to address the issue by building a tunnel under the straits to house the pipeline instead — filed a notice of removal, which moved the lawsuit to U.S. federal court, saying that the state does not have the authority to shut down the pipeline.

In response, the attorney general filed a motion arguing that the case’s proper jurisdiction is state court, and asking that it be sent back. Michigan said the U.S. federal court “lacked subject matter jurisdiction”; that the state’s lawsuit was based on state law, and not federal law; and that Enbridge was only regulated by the federal pipeline agency, but was not actually operating the pipeline through the straits on behalf of it.

It is this motion from the state attorney general, seeking to kick the case back to state court, that the four federally recognized tribal governments threw their support behind as part of a friend of the court brief dated March 30, 2021.

The nations said they agreed with the state that the matter is one for state court, and involved state law. It said the state’s decision to shut down the pipeline was a “legitimate exercise of its authority” to protect land, waters and “treaty-protected resources that have deep cultural, spiritual, and economic significance.”

As the shutdown date approaches, Michigan does not appear to be wavering from its decision. Whitmer’s spokesperson Bobby Leddy has been quoted in numerous news stories this week stating that the pipeline continues to represent a “ticking time bomb” and that it would be “unlawful” for Enbridge to continue to operate it past the date.

Whitmer gave notice in November 2020 that the state was terminating the 1953 easement that had originally allowed Enbridge to lay pipeline along the bottom of the straits, and that the decision would take effect on May 12. Leddy has said that this 180-day period was to give Enbridge time to arrange for the shutdown.

Shuttering Line 5 would be a big mistake, energy ministers warn

A pipeline over 65 years old

A pipeline over 65 years old and the company wants to keep running it until it bursts? Says everything about how dumb addiction to fossil fuels have made many of us......

Everything has a best before due date, including pipelines....and nuclear reactors.......that companies want to ignore that and keep on pumping...under a major water source........says everything about how sustainable our current economy actually is.
Our vote is with the Michigan governor elected on her promise to shut it down before a disaster strikes.

It just boggles the mind that

It just boggles the mind that this is being debated. A 67 year old underwater pipeline designed to last 50 years and carrying such a tremendous amount of crude through such a sensitive environmental area .. and the company likely without the financial wherewithal to shoulder the costs of an attempted cleanup should the inevitable happen .. what are governments waiting for? The cleanup bill? The economic shock of a sudden failure and resulting losses to all those players who lobby to keep it open while externalizing the risks? At this point wouldn’t it make a heck of a lot more sense to pay Enbridge to build the tunnel before disaster strikes as it seems that taxpayers will be paying for it one way or the other.? Perhaps that’s what they have been waiting for?

Forget about anchor strikes .. what about corrosion?

All of the responsible parties have had (at least) twenty years to deal with this. Whitmer is right: Time’s up.