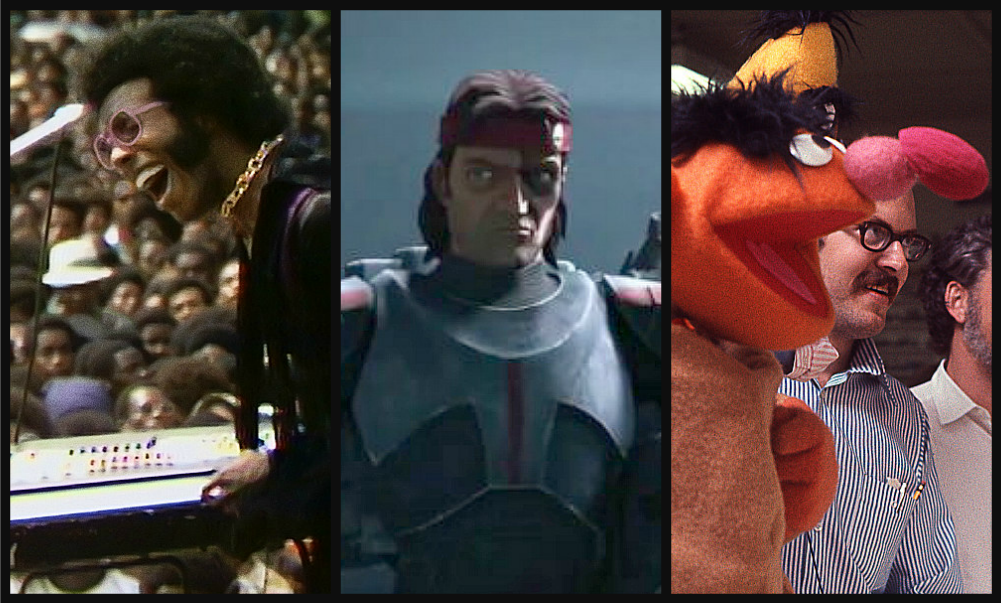 Also: Two more DOXA films (one of them Canadian), and a pair of amusing comedies.
Previous story
Next story

DOXA is the main attraction today. It kicked off yesterday, is on for another 10 days and offers all its titles to stream. Also, seven of its best in a drive-in format next week at the PNE Amphitheatre. Check out for details.

The other big documentary festival, Toronto’s Hot Docs, is also still on. It ends Sunday and is also streaming.

I review another film today that’s at both and a batch of others. Read on.

In the Rumbling Belly of Motherland (DOXA): 3½

Street Gang: How We Got to Sesame Street: 4

SUMMER OF SOUL: With the add-on title, “When the Revolution Could not be televised” (more on that later), this is simply one of the best concert films ever. It’s loaded with great performances by Stevie Wonder, Mahalia Jackson, Sly and the Family Stone, the Staples Singers, Gladys Knight, and more. All major artists at the time, 1969, and seen here playing to a rapturous crowd of 40,000 in a Harlem park in New York. There were seven concerts, over 40 hours of film shot, and they’re now distilled into a thrilling documentary by Questlove. (You saw him do the music at the Oscars this year.) He says he only chose performances that gave him goosebumps. You’ll feel them too when Nina Simone sings Backlash Blues, Stevie Wonder plays drums, and Mahalia Jackson and Mavis Staples blast out Martin Luther King’s favourite song.

The film is more than music, though. Questlove has unobtrusively woven in the historical context. Assassinations and riots the year before, memories of slavery and the civil rights movement, discrimination, police violence. At the same time, there was a cultural revival going on among Blacks. It’s described in new interviews by people who were there, including Jesse Jackson, some of the artists, and fans. “That summer, we became free,” says one. Al Sharpton recalls it as “therapy for our stress and oppression.” It would have made a great TV special, but back then, no network was interested (not in the summer of Woodstock) and the original films sat in a basement for 50 years. The best of them have been restored, and they’re a must-see. (Streaming from both Hot Docs and DOXA, and going to Disney+ in July.) 5 out of 5

IN THE RUMBLING BELLY OF MOTHERLAND: As the United States prepares again to pull its forces out of Afghanistan, this film should be of special interest. They’ve been in and out before, as we’re reminded here. The U.S. supported the Taliban to get the Russians out, and as recently as the Trump Years, held long talks with them towards a peace treaty. Women in the film are constantly worried that it might allow the extremist group back into power and in control of their lives.

They work at a women’s news network called Zan TV. We see interviews with women activists who warn of “brutal oppression,” get analysis of new election laws that make it hard to vote, and follow news crews to government announcements. They’re invited, but sometimes given faulty directions. There’s also the looming fear of suicide bombers and the carnage that has to be reported on. It’s an eye-opening glimpse inside a newsroom that I hadn’t realized even exists. These women are courageous and surprisingly cheerful considering what a Taliban spokesman says in an interview. Muslim law must be followed. Women can work, but not alongside men. 3½ out of 5

FOOD FOR THE REST OF US: Growing food is not just farming. Sometimes it’s a form of activism. So say three filmmakers, director Caroline Cox and producers Tiffany Ayalik and Jerri Thrasher, from the Northwest Territories. In this spinoff from a community TV show, they show us five examples — one nearby, at the Beaufort Sea, one far away in Hawaii. If you grow your own food, you get control of your life, they suggest. You’re free of industrial agriculture and big food companies, and in some cases, like the Far North, of high costs made worse because most food has to be trucked in.

In Hawaii, they talk of using the land righteously. In Kansas City, urban farming fights off what is termed a “food desert,” which is akin to “apartheid”. In the N.W.T., communities have built greenhouses and, in at least one case, a small geodesic dome. In Colorado, we see a curious example: A Kosher-correct slaying and butchering of a lamb. “It’s an ethical way to process meat,” we’re told. “The most radical thing you can do is to know how to butcher an animal.” The drivers in all these examples are survival, adjusting to changes brought on by climate change, and often a hefty dose of spirituality, including honouring your ancestors. Sometimes it includes “decolonization.” It’s an intriguing and idealistic essay, getting a world debut at DOXA. 2½ out of 5

STAR WARS: THE BAD BATCH: Disney has had such success with various Star Wars spinoffs that it’s not a surprise that they’ve started another. This one follows directly on the recently ended Clone Wars series, which ironically Disney cancelled for a time. Five clones introduced near the end that show make up the “batch”: Hunter, Wrecker, Tech, Crosshair and Echo, all voiced by Dee Bradley Baker, and rendered in standard animation by a huge list of artists. The five are imperfect clones. They don’t follow orders; they think for themselves.

It’s a dangerous time. The republic is changing into an empire and Admiral Tarkin wants to wipe out the “separatist insurgents” who object. There’s also a standing order to execute all Jedi knights. The “batch” refuse and aren’t too clear on why the war, said to be over, seems to be still going on. “Nothing controls me,” says one, while Wrecker yells: “I like to blow things up.” They do that, but get into a food fight in the mess hall first, possible evidence that they’re “medically defective.” They say they’re deviant, not defective. They help out some refugees and connect with a young girl named Omega. She plays a major role in Episode 2, which started today, and presumably in the 14 or so to come. Crosshair, meanwhile, is taken for tests and comes back working for the troopers. The 71-minute opener, and the first of the half-hour that follows, sets up a dense, tightly-packed storyline about tyranny by the republic and what allegiance or rebellion you should show. It’s standard, but engaging. (Disney+) 3 out of 5

STREET GANG: HOW WE GOT TO SESAME STREET: It’s probably the most influential TV show ever made for children, and not surprisingly, is well-remembered by adults, too. Many watched it along with their kids; many just grew to love the humour and antics of the Muppets. This film tells exactly how it came to be. It’s not the first time, and a recent ABC-TV special told it again and had some material not in this one. But this is a strong, engaging (sometimes emotionally), and thorough version. We get to see backstage scenes, even the puppeteers at work.

Joan Ganz Cooney pushed for the show because she favoured TV that “loved people instead of trying to sell to people.” Ironically, the show used those TV advertising techniques to teach, and that brought it a lot of criticism. But it won out by simulating a neighbourhood, talking to children about real issues in their life, and bringing in characters they loved — from Big Bird to Oscar the Grouch. And bringing in celebrities like Odetta, Paul Simon and, in a second film this week, Jesse Jackson. You get the songs, the famous ones like It’s Not Easy Being Green, and also Letter B, and one I’d never heard before, Put Down the Ducky if You Want to Play the Saxophone. The film captures the mood and the energy of the show and includes the emotional acknowledgement of Mr. Hooper’s death. It does not include the show’s migration from public TV to HBO, and that’s a fault. There aren’t many others. Enjoy the nostalgia. (Streaming from Hot Docs and now also on Apple, Google Play and VOD.) 4 out of 5

THE OUTSIDE STORY: This is one of those stories in which for one character, one thing leads to another and his whole day turns bad. But it’s not at all gloomy; it’s wry and funny and quite resonant when you think back to days you’ve had like that. And it’s made entertaining through the good-natured performance by Brian Tyree Henry, an actor we’ve seen in many secondary roles, but not in the lead.

The problems start with leaving his keys in his Brooklyn apartment when he rushes down for a food delivery. He’s also short of money for a tip and has no shoes on. He can’t move his car and gets a ticket. Later, some kids throw a water balloon on him, and when he retaliates, he hits the woman cop who ticketed him. And so it goes, from one mishap to another. His landlord can bring a key, but not for some time and when he finally does, our guy misses him. The scenes are cleverly developed and juxtaposed by writer/director Casimir Nozkowski, who has done mostly short films so far. He and his star know how to entertain. (Now available via VOD and digitally.) 3½ out of 5

EAT WHEATIES!: It’s not an ad, but a sign-off line in letters and voicemails. It was said to be used by Elizabeth Banks, the Hollywood actor, in this mildly funny comedy about a man trying to connect with her. He, a very ordinary Joe named Sid Straw and played by Tony Hale, knew her at college in Pennsylvania years earlier and is now in charge of organizing a reunion in Los Angeles. He wants her to come, leaves messages with her and her agent, and runs into a batch of trouble.

The agent slaps a restraining order on him without even thinking about what’s going on. If Banks goes to the reunion, he wouldn’t be able to, even as the organizer. It gets more and more tangled and ends up in court. The story demonstrates well how easily something like this can escalate. And how appalling the people around big celebrities can be. Sarah Chalke plays the agent and Paul Walter Hauser is a lawyer out of his depth. The cast is funny, not for big laughs but chuckles. (Video on demand.) 2½ out of 5