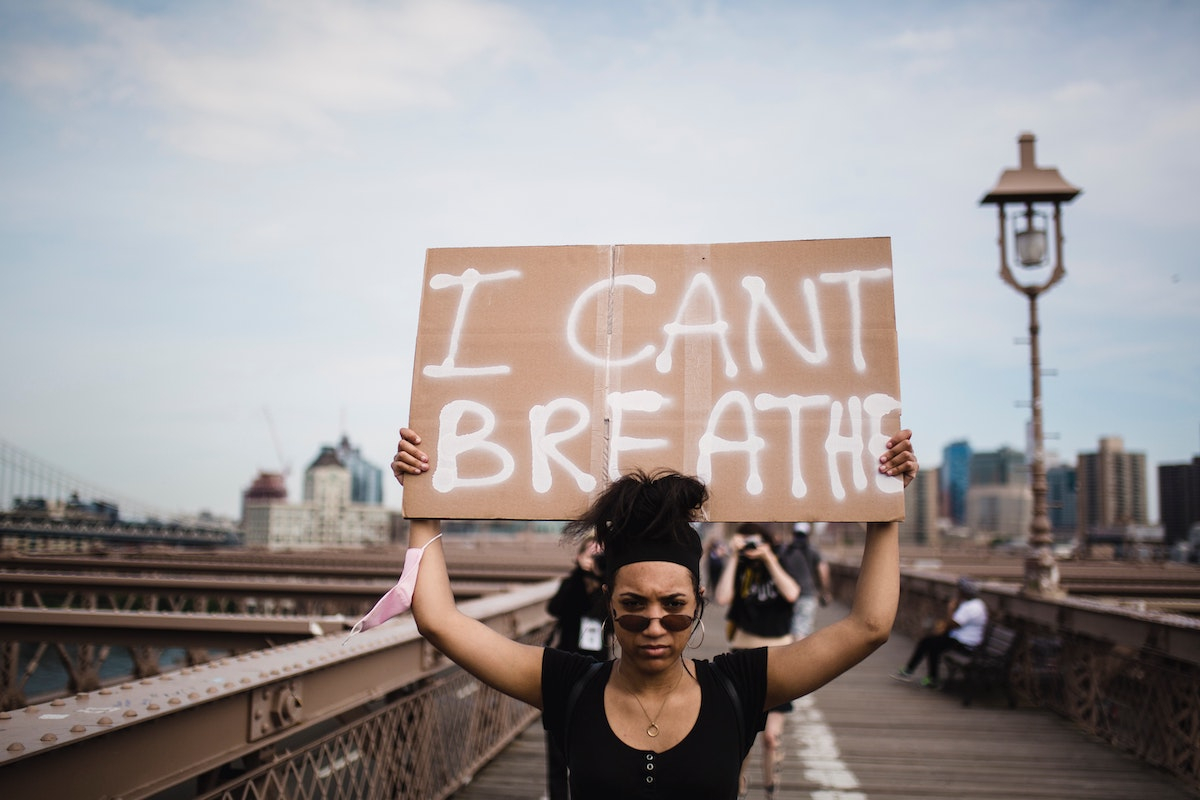 Anti-racism is the only way we can address the root causes of the climate crisis. Photo by Life Matters / Pexels
Previous story
Next story

Spring has always been a time of renewal and hope. I’m filled with a sense of wonder and possibility as I watch new life sprout from the soil and cherry blossoms bloom along streets.

But this spring, I feel a prevailing heaviness. For many of us, this season marks a year since COVID-19 restrictions were put in place. March 13 marked one year since Breonna Taylor was shot in her sleep by police in Louisville, Ky. As the season progresses, and as we pass through solemn anniversaries, I continue to be reminded of where we were a year ago.

Last spring, the COVID-19 pandemic started to unmask the inequalities in society, with the virus disproportionately affecting racialized communities. Headlines were filled with stories of police violence as mass protests erupted around the world. Just over a year ago, we were called to address our long history of racism, white supremacy and colonialism.

Now, in 2021, many Canadians still think of these as American problems. Even worse, many in the environmental movement think talking about race is unnecessary and distracting. Canada’s long-standing false sense of superiority over the United States makes it comfortable for us to separate race from our environmental work.

For decades, Canada has pushed a national myth of acceptance, masking nefarious racism with stereotypical politeness. Our national identity intentionally uses a mirage of a tolerant, multicultural society to cover up Canada’s ongoing systemic racism. This is why racist policies and institutions are thought to be things of the past. It’s why, following the death of George Floyd, some Canadians tried to get “Meanwhile in Canada” trending on Twitter to inject some levity into a dark situation. It’s why, as Canadians, we are able to link police violence in the United States to anti-Black racism, while race-based police violence here at home remains arguably underreported in the media and to police, shrugged off as accidental or overshadowed by “sensational” stories that take place in the U.S.

Desmond Cole, journalist and author of The Skin We’re In: A Year of Black Resistance and Power, highlighted this issue while speaking about the limitations of police reform and the movement for abolition in the Canadian context. He told the story about a 33-year-old man and his 18-month-old son who were shot and killed by Ontario Provincial Police last November in Kawartha Lakes. He asked the rhetorical question, “If this seems like a bizarre story to you, why haven’t you heard it until now? Why isn’t it a story in the way that a person being murdered by police in another country is a story?”

These problems may seem unrelated to our work in the environmental movement, but they are deeply interconnected. Capitalism and imperialism use racial inequities and white supremacy to justify the exploitation of land and labour for profit.

What does this mean for the environmental movement?

The forces we fight already weaponize race as a political wedge that allows elites to hold power while natural systems and labour are overexploited, largely at the expense of Black and Indigenous communities. Our refusal to talk about it upholds that status quo.

Racism is at the core of the extractive, exploitative and inequitable economic system we live under — a system that, if unchanged, is incompatible with a just transition to a clean energy future. Imperialism and capitalism create economic disparities in racialized communities that inhibit community members from fighting for social change, and strips them of the resources needed to recover when climate disasters strike.

​​​​​​​Racism is at the core of the extractive, exploitative and inequitable economic system and is incompatible with a just transition to a clean energy future, writes @janellelapointe @DavidSuzukiFDN #cdnpoli #ClimateAction #ClimateSolutions

As environmentalists, we are known for being fierce advocates for change, for the well-being of all life. Our commitment to the movement is rooted in evidence, science and traditional ecological knowledge. We use storytelling to inspire others to act, appealing to people’s humanity and motivating them to go beyond their comfort zones.

We aren’t starting from scratch. Racialized organizers have done the work to educate us on the links between racial and climate justice. The newest generation of climate activists is modelling how strong we can be when we apply justice, equity, diversity and inclusion lenses to our work. We have the power to make systemic changes to racist laws and institutions. Now, we just need everyone on board.

Working across movements and making room for diverse perspectives allows us to share knowledge, best practices, resources and support. Diversity is not just a strength. Anti-racism is not a burden. It’s the only way we can address the root causes of the climate crisis. Anti-racism is how we win.

Janelle Lapointe is an Afro-Indigenous climate justice and Indigenous rights activist from Stellat’en First Nation, currently working in communications with the David Suzuki Foundation as a guest on Sḵwx̱wú7mesh (Squamish), Səl̓ílwətaʔ/Selilwitulh (Tsleil-Waututh) and xʷməθkʷəy̓əm (Musqueam) territory.

It is quite true that racism,

It is quite true that racism, or its analogues targeting "undesirable" minorities is universally associated with kleptocratic, exploitative economic and political systems. Every autocratic authoritarian government includes foundational scape goating of, and violence against vulnerable minority groups. Currently Indias Hindu nationalist government is systematically attacking not only its Muslim populations but is also rigorously restoring the demented and cruel caste system. China is practicing modified forms of genocide against minorites in its claimed territories of Tibet and the Muslim majority Uighur and Kazakh "autonomous" regions.
Russia has systematically attacked the citizens and territories of the former Soviet era puppet states often using the Nazi German excuse of protecting Russian minorities iln those formerly subjected states. The Rohingya refugees are victims of the same racial cleansing mentality. NO doubt other examples can be found. In almost all cases the racism has an economic motive - eliminating competition for resources, depriving people of land and livelihoods. Loading specific territories and peoples with the toxic damage of uncontrolled extraction and resulting wastes and pollution is the standard playbook - around the world - including in the so-called democratic free world. Economic racism is a foundational principle of Capitalism, but also of Communism and Authoritarianism.

There's significant evidence that anti-black racism as we know it was in fact deliberately created and fostered by British plantation communities in the Caribbean, and what was to become the US South. When those plantations began, it wasn't legal to enslave just anybody. Originally, they were able to enslave Africans to work on plantations on the basis that they weren't Christian--and of course for Western Europeans, non-Christians have been fair game to victimize since forever. But then missionaries started converting them, and there was a lot of money at stake--they needed SOME excuse to keep the plantation workers down. Nearly as bad, the white indentured servants, working class, often Irish, showed signs of making common cause with the slaves against the landowners.

It was only then that these colonies started seeing rules, laws and differential privileges based on skin colour. This served both as excuse to keep the Africans enslaved, and as a way to divide them from the servant class and the rest of the lower orders--sailors and so on. Things haven't changed as much since as one might think.

Slavery wasn't abolished by the Brits till the 1830s. The plantations in the Caribbean were in place around 200 years before that. Slavery was going on in Britain before the Romans arrived, and people were taken as slaves by "traders," to points afar. Neither did the inhabitants of those isles, or those who carried them off to be sold as slaves.

The Old Testament of the Bible refers to slavery, who can be kept as a slave and who not, under Jewish law: Jews couldn't take other Jews as slaves, couldn't charge them interest on money loaned, and were required to help out poor Jews, as though they were a member of their family. The logic was that God wouldn't allow it, because Jews were all servants of God, and thus could be beholden to no other master ... but all slaves were freed every few years. In the meantime, slaves could be "bought back" from the owner, by a relative, or if they had the means, could "buy" their freedom by paying their "owner" for the remainder of the term remaining before the regular, periodic day slaves were released. Egyptians thousands and thousands of years ago kept slaves.

It's been a perennial problem, around the world and throughout history, and who was master and who slave, was determined by who had rank in the dominant culture, race, religion.

In addition, those at the top of hierarchies were free to use those in "low" positions, as they chose. That's how feudalism worked. That's largely how our

Then there were/are "indentured servants" ... who were owned by masters. Some were term indentures, some lifelong indentures. Some were by choice, some were forced, others were to discharge debt. To this day, employment law speaks of a master servant relationship.
Only very recently in history have there been laws governing the behaviour of the "Have" in any Have-HaveNot arrangement. We have only theoretical laws governing the behaviour of politicians.
There are no repercussions.
For the poor, for the downtrodden, there are punishments for just breathing.
For the wealthy and powerful, there are no repercussions, for anything.

As with everything, there need to be societal controls on individuals who'd use and abuse others. In the case of those we've selected to make decisions on our behalf, strong controls are needed. Or we get what we've got.

Thank you for this rational

Thank you for this rational history lesson. This perspective is almost totally missing from modern journalism that deals with the repression and exploitation of 'have-nots' but gets totally swept up in the emotionalism of identity politics. We need to make more effort to distinguish the messenger from the massage and the message sender in our efforts to change society in the direction of better equity.