U.S. eases masking rules for fully vaccinated. Canada may not 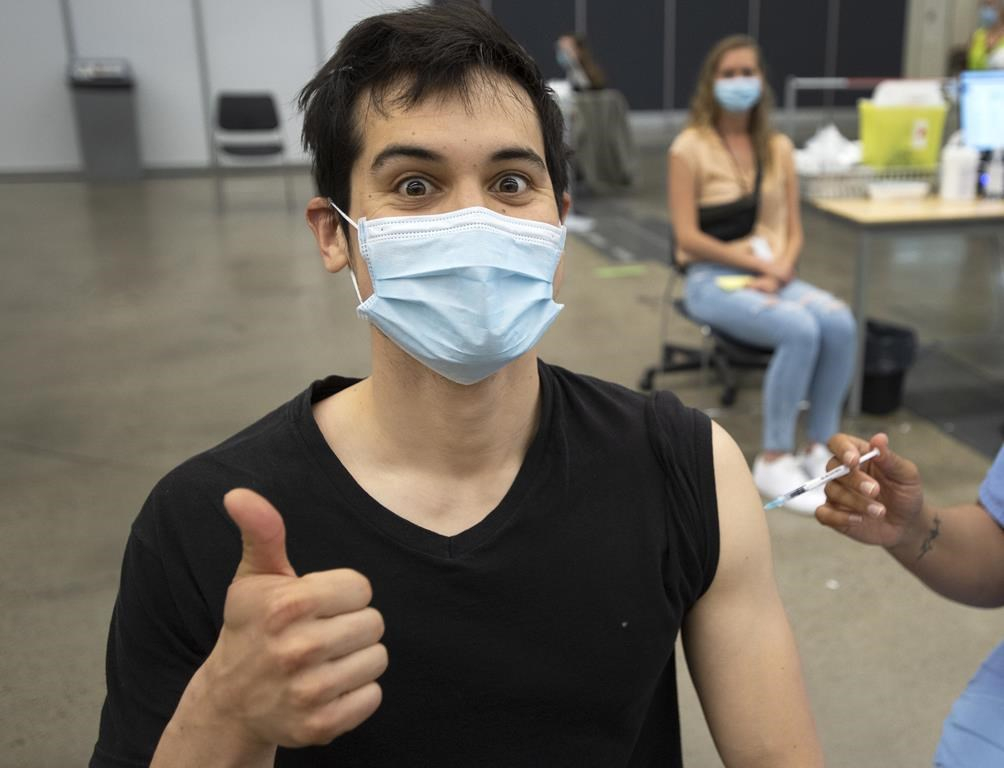 Adam Feller reacts as he gets his Pfizer-BioNTech shot at a COVID-19 vaccination clinic on Thursday, May 13, 2021, in Montreal. File photo by The Canadian Press/Ryan Remiorz
Previous story
Next story

The U.S. Centers for Disease Control and Prevention says people fully vaccinated against COVID-19 no longer need to wear masks outdoors and in most indoor settings, but one of Canada's top public health officials suggests a different approach would be taken here.

"We have more of what I'd call a collective or community approach," Dr. Howard Njoo, deputy chief public health officer, told a briefing in Ottawa on Thursday. "So it's not about what an individual should be able to do with one or two doses."

He said even as more Canadians get their shots, public health measures such as physical distancing, mask wearing and frequent hand washing remain key.

Njoo added the rate of new infections, the number of new cases resulting from each infection, test positivity rates and impact on the health-care system are all factors that should be weighed.

"If all that is looking good at a certain point in time — along with high vaccine coverage — that's the point I think that certainly local health authorities will be able to consider loosening restrictions on what Canadians are able to do."

Njoo said 40 per cent of eligible Canadians over the age of 18 have now received one vaccine dose — good, but not maximum, protection.

More than 46 per cent of the U.S. population has been given at least one dose and more than a third given both.

Njoo made his remarks after Ontario announced it's keeping its stay-at-home order in place until at least June 2 in order to have the "most normal July and August possible."

Premier Doug Ford said Thursday that public health measures have been effective in driving down cases, but need to be continued for now.

The province reported 2,759 new infections in its latest update — well below the more than 4,000 a day it was seeing when it last extended the order and added sweeping restrictions about a month ago. The order was to have expired next Thursday.

Ontario had 1,632 patients hospitalized with COVID-19, including 776 in intensive care.

The province's chief medical officer, Dr. David Williams, has said he would like to see "well below" 1,000 daily cases before Ontario considers lifting the stay-at-home order.

"We're about where we were at the peak of the second wave, so we've come down but we have a ways to go yet," he said.

Back in Ottawa, the military officer in charge of Canada's vaccine rollout said 655,000 doses of the Oxford-AstraZeneca vaccine have been received from COVAX, the global vaccine sharing alliance.

The doses aren't being immediately distributed, but provinces are invited to put in orders, said Maj.-Gen. Dany Fortin.

"We want to assure everyone that sufficient supply will be available for those who want a second dose of AstraZeneca or who cannot take an mRNA vaccine (made by Pfizer BioNTech or Moderna)," he said.

Njoo said that Canada has confirmed 18 cases of an extremely rare blood clotting condition in patients who received the AstraZeneca shot and that 10 more are under investigation.

Quebec cited that side-effect as its reason for pausing the AstraZeneca shot as a first dose. Ontario and other provinces have made similar moves as supplies of other vaccines, including Pfizer's product, are poised to pour into the country.

Quebec health officials said people who have already received one AstraZeneca shot will have the choice to get it as a second dose or to receive a different one.

Neighbouring New Brunswick announced that it had two more cases of the blood clots for a total of four. The two latest clots involved people who received AstraZeneca shots in mid-April. One remained in hospital, while the other has recovered.

The Atlantic province reported 16 new COVID-19 cases, along with 10 hospitalizations.

On the Prairies, Manitoba reported a single-day record of 560 new infections and Saskatchewan had 223 new cases. Alberta, with the highest case rate in the country, had 1,558 new infections.

In the North, Nunavut had 12 new cases — all in the capital city of Iqaluit, which has a population of about 8,000 and remains under tight restrictions.

Provinces cracked down harder on COVID offenders during second wave

By Maan Alhmidi | News, Politics | May 13th 2021
Coronavirus in Canada