When talking climate politics in Canada, don't forget the Bloc 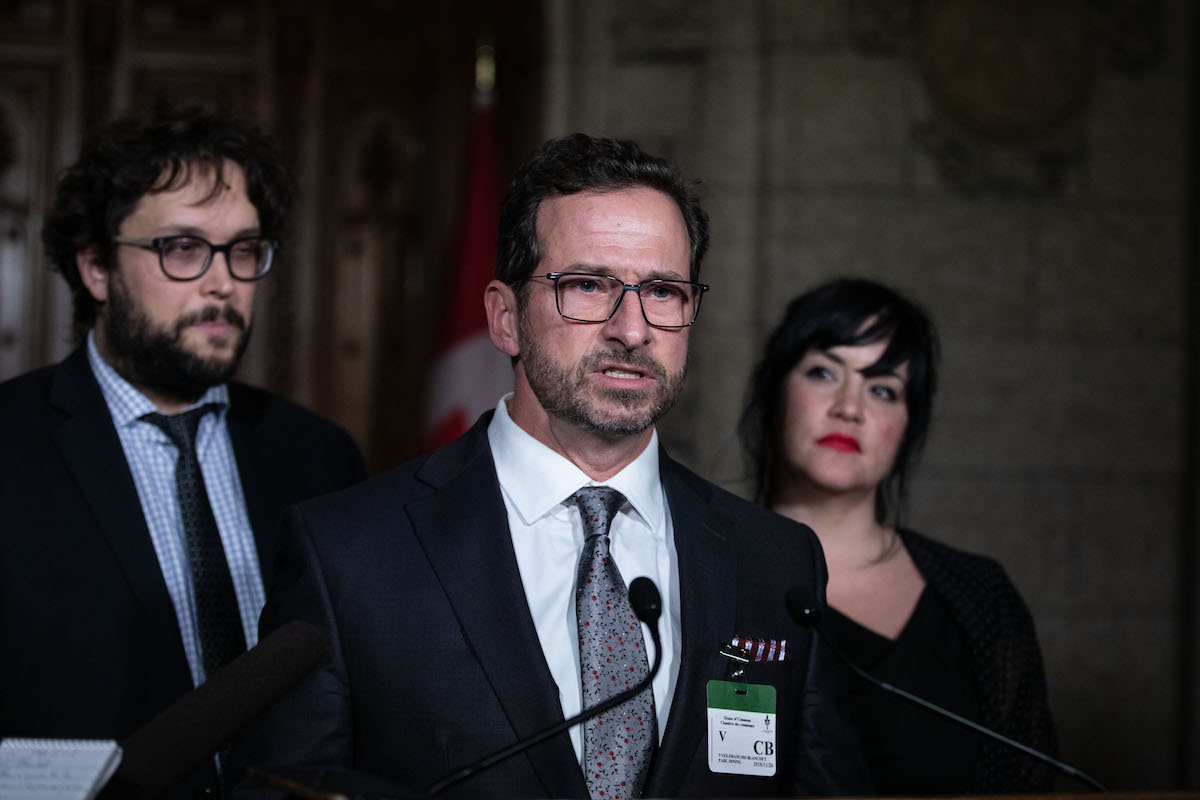 Yves-François Blanchet addresses the press in the foyer of the House of Commons after question period on Nov. 26, 2018. File photo by Alex Tétreault
Previous story
Next story

On April 16, Canada's National Observer's Carl Meyer wrote an excellent analysis of the climate plans of the four main political parties of Canada. However, there is a fifth national party. The Bloc Québécois (BQ) has 32 members of Parliament in the House of Commons. That is more than the combined total of the NDP (24 MPs) and the Green Party (three MPs).

Since its foundation in 1990, the Bloc has promised to be the link (courroie de transmission) between the Parliament of Ottawa and the positions defended by the Quebec government of L'Assemblée Nationale. So today, on Parliament Hill, the BQ also speaks in the name of Premier François Legault.

Parallel to this political situation, in Quebec, there is a strong citizens' movement against the use of hydrocarbons and the climate changes it induces. In order to be able to work with all and any elected officials, this movement avoids partisan politics. If I may paraphrase Bill McKibben during an interview with National Observer on March 4: We must not wait for politicians to initiate changes. An environmental movement must first be created to change the perception of the majority of citizens on the subject of climate change. Once that has been accomplished, all political parties must adjust their platforms in order to have a fighting chance of being elected. At the very least, they must pay lip service to climate change.

Under the watch of former Liberal Quebec premier Jean Charest, the province’s Oil and Gas Association acquired millions of acres of gas “claims” in the St. Lawrence Lowlands at the bargain price of 10 cents per hectare. Then, in 2010, these gas companies proposed to drill about 20,000 wells using the controversial technique of hydraulic fracturing. The uproar caused by this “invasion” led to BAPE (an acronym for Quebec's environmental assessment agency) becoming involved.

At least 130 local citizens’ committees were formed and began to operate under a confederation of committees now called Le Regroupement Vigilance Hydrocarbures du Québec. Seasoned environmental leaders such as André Bélisle, Patrick Bonin, Dominic Champagne, Serge Fortier, Jacques Tétreault and hundreds of others acquired knowledge about the negative side-effects of hydrocarbons, then perfected their skills to communicate to the average citizen the dangers of the reckless use of fossil fuels and the necessary actions to be taken in order to avoid catastrophic climate change. Personally, I have written hundreds of articles, which were published in various media outlets.

To celebrate Earth Day in 2012, this movement mobilized 300,000 to walk on the streets of Montreal. Again, on Sept. 27, 2019, in the midst of a federal election, another 500,000 people flooded the streets of Montreal to demand positive action on climate change. That figure of a half-million doesn't include the marchers in other cities and towns of Quebec.

Eleven years of wall-to-wall climate activism should have an influence on the politics of all parties. For example, after his election in 2018, newly elected Premier Legault, whose platform had been weak on the environment, acknowledged that the issue was important for many voters. And then, he said that he would not allow the Energy East pipeline because there was no social acceptance for that project.

We can now return to Carl Meyer's analysis, which did not include the platform of the fifth federal political party. When you read the platform of the BQ, you will notice that one of its priorities is the environment. It will aim for “... the gradual elimination of fossil fuels ... underline the incoherence of Ottawa to implement the Paris Accord … and co-ordinate efforts for the electrification of transports…” (My translation).

If you want to read its detailed program on the environment, you must reference pages 12 to 14. In a nutshell, its environmental platform proposes:

Sometimes, there is common ground between the positions of former Green Party leader Elizabeth May and Bloc Leader Yves-François Blanchet. Perhaps, some English-speaking readers may feel uneasy when reading the program of a party that promotes “l'indépendance.” But as long as we are part of Canada, we also have the right to express our opinions and defend our interests. And this opinion is part of the equation that is present-day Canada. Quebec has 78 MPs in the House of Commons. If you ignore 32 MPs in this equation (41 per cent of all MPs from Quebec!), there are bound to be a few rough bumps ahead.

The Bloc Québécois wants the Liberal government to avoid calling an election during the pandemic. But there are other reasons to pay attention to the Bloc — including the environment, writes Gérard Montpetit. #BlocQC #cdnpoli #ClimateAction

One of the objectives of the BQ is to defend the positions of “Les Québécois,” whether of its citizens or its government. Contrary to the Liberals or the Conservatives, party discipline cannot prevent a BQ member from defending what former Quebec Liberal premier Robert Bourassa called “les intérêts supérieurs du Québec.”

The BQ is willing to defend all Québécois, whatever their political allegiance.

Thank you for this opinion piece. It helps me understand Quebec politics, and it demonstrates the power of mobilizing people to make politicians change...

Thank you for this opinion piece. It helps me understand Quebec politics, and it demonstrates the power of mobilizing people to make politicians change...

The BQ, with the advantage of

The BQ, with the advantage of FPTP, definitely, nationally punches way above their weight.

English speakers have many blindspots and biases, but so do francophone Quebeckers. Maybe a subtle potential advantage here is that both can gently hold a mirror up to expose the others so that we can collectively get better at governing. Indeed as COVID has exposed there is no short supply of bad governance whether you live in BC, Alberta, Ontario, or Quebec. Unfortunately regionalized parties like the Bloc, and provincially Alberta UCP, and others tend to just 'talk at' the other regions in order to score cheap political points at home. Whether it's Kenney saying it, or Blanchette saying it, it is designed for local consumption to score cheap political points on the home front, not actually help understand the other or collectively get better at governing.

And so, while it's nice to see common support for environmental causes, I'd much rather have a proportional or ranked ballot system where Greens could see equal representation across all provinces. With that there might be the possibility of real dialog and real progress on this existential issue.

Interesting article. I will