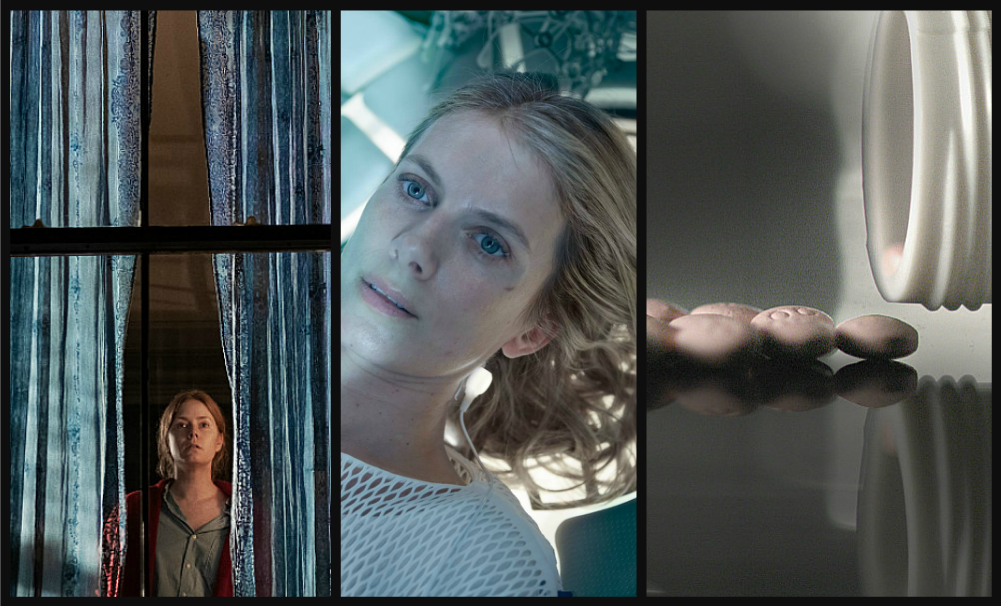 Also: A poignant film about surviving a marriage breakdown.
Previous story
Next story

The Golden Globes are in danger. NBC won’t carry them next year because the people who really count to the movie fans rebelled. That would be the stars, and likely to their agents. Vanity Fair magazine has a long article giving all the background. It’s worth checking out.

Meanwhile, we’ve got the Canadian Screen Awards coming up on Thursday. Also worth checking out to show you have some interest in Canadian films. By chance, you can see one of the nominees for free and read about it below.

The Crime of the Century: 4½ stars

The Killing of Two Lovers: 4

The Woman in the Window: 3

THE CRIME OF THE CENTURY: That other medical crisis going on right now, the opioid deaths, gets a full and thorough backgrounder here from Alex Gibney. He’s one of the best documentary makers working these days, and he’ll have you seething with anger when you see what he has turned up. He names names. The Sackler family of Purdue Pharma are well-known for pushing opiates, but I hadn’t heard of the man who ran Insys Therapeutics, which hustled fentanyl. Or that other companies including Johnson & Johnson got involved or that Rudy Giuliani was managing Purdue’s public relations for a time.

The film, in two full-length parts, details how the companies pushed opioids as painkillers by false claims and tactics close to fraud. Doctors were paid for speaking engagements, which amounted to bribes to prescribe. Purdue claimed OxyContin isn’t addictive because it has a slow-release coating. That’s despite reports that addicts were scraping off the coating, crunching the pill up, and getting high. The whole seamy picture is proven with real evidence, company videos, leaked documents, interviews with former sales reps, ex-government officials, a former Drug Enforcement Agency agent and, most startling, a doctor who is proud of the prescriptions he wrote and says he was “addicted to the treatment of pain.” Other interviews include Patrick Radden Keefe, the author of a new book on the subject, and some reporters from the Washington Post, which produced the film. Part 1 is about OxyContin, and reminds me of an excellent CBC Fifth Estate episode on the disaster that drug brought. Part 2 is about fentanyl. There’s too much information here to absorb all at once, but it’s solid and scandalous. (Crave) 4½ out of 5

THE FREE ONES: It’s nominated for its cinematography and editing at the upcoming Canadian Screen Awards. Too bad there’s no category for humanity because that’s the real strength of this documentary feature from Quebec. You get to know, somewhat, a group of young prison inmates taking their first steps back outside into the real world. They sign up for job training at a sawmill/lumberyard and learn the fine points of sorting wood, culling the damaged boards and stacking for shipment. Doesn’t sound rigorous, but the hard part for some is learning discipline and applying themselves.

They’re marked on a list of categories like “reliability,” “self-control” and getting along with co-workers. The camera takes us close to those one-on-one sessions and to therapy circles where they work on anger management. The film by Nicolas Lévesque hardly mentions their crimes, but gets us rooting for them to make it work. (It’s streaming for free from The Cinematheque until May 27.) 3 out of 5

THE KILLING OF TWO LOVERS: I’m not at all familiar with the actors in this film (Chris Coy, Clayne Crawford, Arri Graham) or the writer-/director Robert Machoian, but I’m going to watch out for anything else they do. This is one of the most truthful pictures I’ve ever seen of a relationship that has gone bad. There are no recriminations. The characters are still decent (well, most) and they’re genuine and kind. The main man is a hard-scrabble small-jobs guy in Utah played by Crawford who loves his kids and can’t stand that his wife (Sepideh Moafi) has a new boyfriend (Coy). He has a brief fantasy of killing somebody, but backs off and that title never does deliver what it says.

What it does give us is an everyday person living an unexceptional life. That’s rare in the movies, certainly in a lead character. He’s back living with his father, and at times, seems like a big kid. Mostly he’s adrift, stoic about his loss and unable to repair his marriage. He entertains his three sons and tries to calm his angry teenage daughter. “Why can’t you just be together?” she yells. The film is melancholy at times, light and hopeful at others, and always resonant because these people feel real. The writing is economical and the acting is natural. You really feel for this guy. (Available across all digital and on-demand platforms.) 4 out of 5

OXYGEN: Of the thrillers that arrived this week, I’d say this one from France is the best. It’s tense and smart and crisply directed by Alexandre Aja. He holds back his usual horror tendencies and gives us an intriguing mystery. I can’t tell you much about the plot because almost anything would give away the story and spoil the slowly coming revelations.

Mélanie Laurent plays a woman who wakes up in a small chamber one day. She’s restrained in a sort of plastic wrap and doesn’t know why she’s there or even who she is. Brief flashbacks give some clues, but not enough to explain. A disembodied voice offers her sedatives, which she refuses, and only thin answers to her questions. Voiced by Mathieu Amalric, he says he’s an interface liaison operator, but seems to have even less personality than HAL, the 2001: A Space Odyssey computer. He’ll do what she asks of him if it’s easy, like placing phone calls, but gets stiffly bureaucratic in refusing others. All the while, the oxygen in the chamber is getting lower, and she has to find out what’s going on if she has any hope of getting out. Some of the answers do come, bit by bit, and they make sense. Science, technology, the environment, the future and history all blend easily in this movie. (Netflix) 4 out of 5

THE WOMAN IN THE WINDOW: Film buffs have identified several flicks this one seems to be like. Hitchcock’s Rear Window, naturally, because the story is so similar, but also one called Copycat from 1995. It, like this one, centres on an agoraphobic psychologist who doesn’t go outside lest she gets panic attacks. Never mind. There’s lots to respond to anywhere: suspense, as staged by director Joe Wright, strong acting by a top cast and a complex, sometimes perplexing, story from a bestselling novel by A.J. Finn. You’d better be alert, though, to follow it through to its resolution.

Amy Adams plays the shut-in who, after witnessing what she thinks is a crime in an apartment across the way, tries to tell the police. She’s not believed. Then she encounters the people she was watching. They all come knocking on her door; first a young man (Fred Hechinger), then his mother (Julianne Moore) and then his father (Gary Oldman). Amy suspects they’re lying to her and with her laptop and phone does her own sleuthing. With a bit of help from her downstairs tenant (Wyatt Russell), she finds a mysterious story involving all these people. It would be good if that were it, but the story then twists and unfolds further, and its credibility suffers. It’s fun as a puzzle, though, and the hefty bouts of tension might keep you awake and buzzing for a while. (Netflix) 3 out of 5

IN THE EARTH: This one fits this particular time exactly. It’s during a virus, not COVID-19, some other, and exudes a strange, surrealistic ambience that might match what you’ve been feeling. Then it goes off in its own way, or rather British writer-director Ben Wheatley’s way. In other words: strange and creepy.

Joel Fry plays an agriculture research scientist looking to find a colleague who has been missing for a time, and with a park ranger (Ellora Torchia) heads into the woods to find her. He’s warned that “people can get funny in the woods sometimes.”

The walk will take them two days, and they come armed with folklore about a “spirit in the woods.” They’re attacked; their shoes are stolen. He gets a serious gash in his foot that requires stitches. That’s done without an anesthetic, a lot of the wound is visible and there's icky blood (hey, it’s a Ben Wheatley film, and there's more pain coming). They meet a very weird woodsy character named Zack (Reece Shearsmith) and eventually the colleague they’re looking for (Hayley Squires). She’s got the woods wired for sound, so she can hear the trees talk to each other. Flashing lights cause a strobe effect that makes it all eerie and unworldly. Earlier, someone says the forest is closing in around them. Later, there’s a yearning, apparently from the trees, for “how we can live together without destroying each other.” Horror with some ecological roots. Interesting, but too bizarre. (Available digitally and on demand.) 2½ out of 5