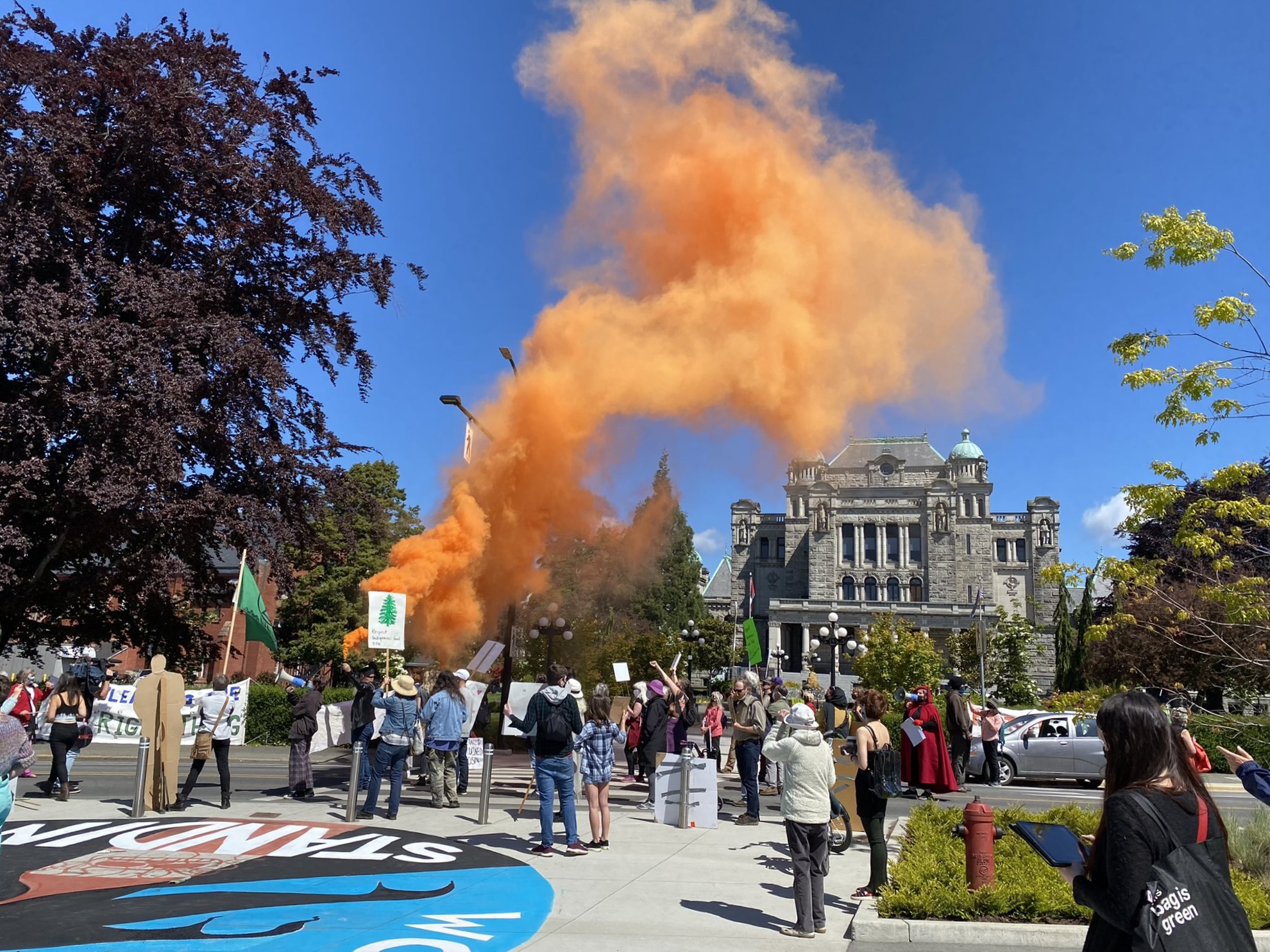 RCMP unexpectedly arrested a number of old-growth activists with the Fairy Creek blockades inside the control zone near the Caycuse Camp early Thursday morning.

Meanwhile, downtown Victoria was plagued by stalled traffic, placards and orange smoke plumes as a large demonstration to support blockaders and protect ancient forests broke out later the same morning.

Details of arrests are still emerging from the remote camp out of cell range in the Caycuse watershed on southwest Vancouver Island.

However, RCMP confirmed the arrests of seven people at the Caycuse Camp in a statement Thursday afternoon.

Six people were detained for breaching the injunction and one was removed from the area with no recommended charges, RCMP said.

The Rainforest Flying Squad (RFS), the grassroots coalition behind the various blockades in Teal-Jones tree farm licence (TFL) 46 near Port Renfrew, reported the arrests involved significantly more force than those made earlier in the week and took place without any media present to watch police.

It’s not the RCMP’s prerogative to prohibit media from being in the police-designated exclusion zone without a media handler, said Noah Ross, an RFS lawyer.

“There should be freedom of the press and the ability for them to document arrests,” Ross said.

“It’s really important for people’s safety. The character of the arrests today were a lot more violent with people being tackled by police.

“So it’s a concerning escalation by RCMP.”

But a patrol early Thursday morning encountered more activists at the site where people were arrested Wednesday, Manseau said.

“Officers hadn’t anticipated there was anyone in the area,” he said, adding that after police clear a zone, it’s typical they continue to hold it.

“But then, sometime between yesterday and this morning, protesters literally came out of the trees,” Manseau said.

“They were encountered by members and our day of no planned enforcement turned into a bit of a scramble to get media into the area.”

A police-escorted media convoy into the control zone set out at 11 a.m., he added.

At the same time, a large protest in support of blockaders, and calling on government to end old-growth logging, erupted near the legislature buildings in Victoria mid-morning.

Dozens of protesters blocked an intersection on Superior Street outside the B.C. Ministry of Environment, said Torrance Coste of the Wilderness Committee, adding it seemed to be a spontaneous demonstration.

“I didn't hear about the protest until just now and came down to check it out,” Coste said.

“The anger is palpable, and people are literally calling on Environment Minister George Heyman and Premier John Horgan to come down and address them directly.”

The Wilderness Committee typically advises people to contact their MLA or write to the minister of environment, he said.

“But more and more people are telling us that’s not good enough, and that they need to take things into their own hands,” Coste said.

“And we’ve been trying to communicate this frustration to the government for a long time.

“The protests and the blockades we’re seeing on the logging roads just aren’t surprising to me.”

Police enforcement of the court order against activists blocking access to various stands of ancient rainforest for more than eight months in the Teal-Jones TFL began Tuesday.

Caycuse Camp is the only blockade currently being restricted. All other remaining blockade camps in TFL 46, including the Fairy Creek site, are open to movement, the RFS said.

RCMP reported Wednesday they had arrested a total of 14 people by day's end.

The majority were arrested for breaching the injunction, while three others were detained for police obstruction.

One included a filmmaker who refused to remain inside the media containment area during Wednesday’s enforcement, the RFS reported.

RCMP have now arrested a total of 21 individuals since enforcement of the injunction got underway Monday.

Editor's Note: This article was updated Thursday evening to include new information from the RCMP and comments from a member of the Rainforest Flying Squad's legal team.

Humanity must take responsibility for protecting the old growth forests. That includes citizens, politicians, corporations, the law and all the groups that work to make the world a better place.

The last few decades has allowed business and profit to clear cut the conscience of our species. Greed trickles down to obliterate our senses and turned us into consumers.