Vaccinations put Canada on the path to reopening 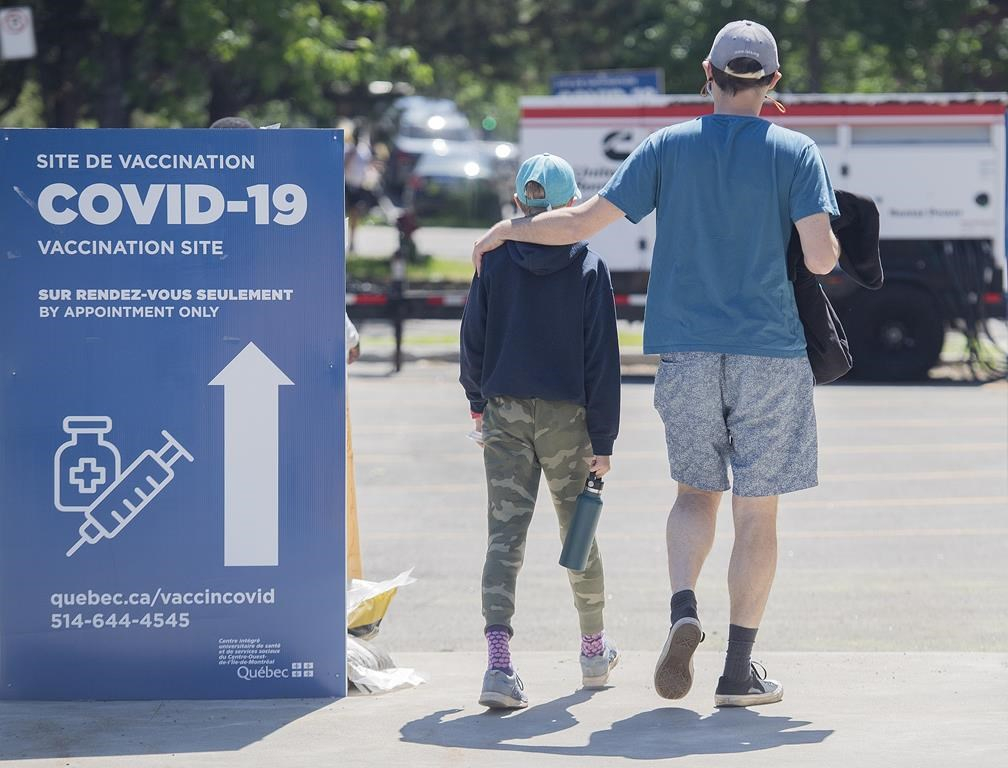 A man and  child walk into the Bill-Durnan COVID-19 vaccination site in Montreal, Monday, May 24, 2021. Photo by: The Canadian Press/Graham Hughes
Previous story
Next story

TORONTO — More than half of all people in Canada have received their first dose of a COVID-19 vaccine as the country edges closer to lifting anti-pandemic restrictions, health authorities reported on Wednesday.

In all, 20 million people have had a shot, close to two-thirds of those aged 12 and older. Children under 12 won't become eligible to be vaccinated for several more months.

Provinces have already begun easing restrictions, with some announcing various reopening plans that depend on higher vaccination rates and falling case counts.

British Columbia announced a four-step plan for reopening which, if all goes well, sets Labour Day as a target for the final stage to begin, which would include allowing live entertainment.

Ontario, which has eased up on outdoor recreation, is planning a three-stage reopening, beginning middle of next month, while Quebec is aiming to see the province out of its highest alert level on June 7. Quebec is planning to relax restrictions in eight regions as of Monday.

The vaccination milestone came as Ontario reported another 135,308 people received a shot.

The vaccination rollout was also making good progress among Indigenous adults, with more than three-quarters now having received at least one dose of COVID-19 vaccine.

Federal Indigenous Services Minister Marc Miller said Indigenous people in Manitoba, which has the highest rate of new coronavirus infections in the country, can book their second shots. Manitoba said second doses area available for anyone who received a first dose on or before March 29.

Despite the ongoing vaccination progress, COVID-19 continues to sicken and kill people. Ontario, for example, reported 1,095 new cases on Wednesday, and 23 more related deaths. The Ministry of Health said 1,073 people were in hospital because of the disease, with 672 in intensive care and 469 on ventilators.

With over half of Canadians now vaccinated, #Canada is on the path to re-opening. #COVID #vaccinations #cdnpoli #BC #Ontario

A new report from Statistics Canada found the pandemic hit women slightly harder than men in terms of employment. The agency said women accounted for 53.7 per cent of year-over-year employment losses from March 2020 to February 2021.

Relatively more women work at small firms in service industries, which, StatCan said, had been hit hardest during the pandemic.

This report by The Canadian Press was first published May 26, 2021.