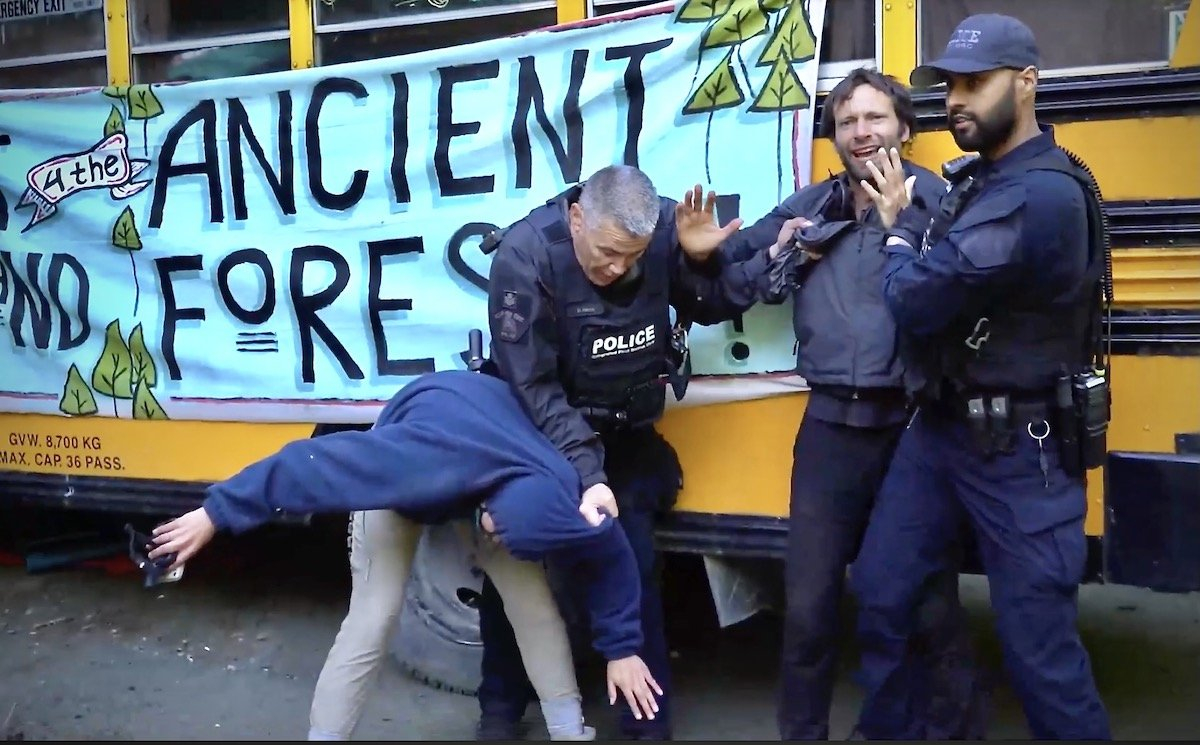 RCMP arresting old-growth activists at the Caycuse blockade Thursday reportedly demonstrated a higher level of force than earlier in the week. Screen grab courtesy of the Rainforest Flying Squad
Previous story
Next story

Canada’s National Observer, along with several other news organizations, is planning to file a legal application requesting the RCMP allow journalists fair access to cover the Fairy Creek blockades happening on Vancouver Island.

The blockades, set up to oppose old-growth logging, have been in place since August 2020 in the forests around Port Renfrew, B.C., in the traditional territory of the Ditidaht and Pacheedaht First Nations. RCMP temporarily blocked media access to the site last week when they were set to enforce an injunction against demonstrators. Over 50 people have been arrested at Fairy Creek so far.

“Over the past week, we’ve repeatedly seen the RCMP shift the goal posts on how it plans to allow journalists access in order to cover this important public interest story,” said Brent Jolly, CAJ president.

“Every day is a new day with new excuses from the RCMP about why access is limited. Enough is enough.”

The announcement comes one day after the same group sent a letter to the RCMP, which has not yet been acknowledged. A statement from the CAJ on May 18 requested the RCMP's powers be cut back when enforcing the injunction at Fairy Creek — powers that were granted to them by the B.C. Supreme Court on April 1, 2021.

“The key problem stems from a clause typically included in most injunctions which gives police broad discretionary powers to detain or arrest anyone violating the order or interfering with police actions. In spirit, the clause is meant to allow police to remove demonstrators who are the subject of the injunction,” read the release.

“However, the police have repeatedly used the clause to deny access to journalists, to arrest them, or detain them.”

Problems and criticisms around RCMP’s treatment of journalists aren't new. In September 2020, journalist and recipient of the 2020 CJF-CBC Indigenous Journalism Fellowship Karl Dockstader was arrested while covering the 1492 Land Back Lane occupation in Caledonia, Ont.

“This is certainly part of a disturbing pattern we've seen from the RCMP over the past several years. But sometimes, power only understands power,” said Jolly.

“I'm extremely heartened by the collective solidarity of the other parties to this application. To me, it affirms that journalists are prepared to stand up for their right to cover matters in the public interest. Press freedom in Canada will not go quietly into the night.”

[email protected], along with several other news organizations, is planning to file a legal application requesting the RCMP allow journalists fair access to cover the #FairyCreek blockades happening on Vancouver Island. #PressFreedom

As to why Canada's National Observer chose to participate in the suit, CEO and editor-in-chief Linda Solomon Wood had this to say:

"Corralling journalists into pens to exclude them from covering stories of public interest is wrong. It's antithetical to the concept of a free press and a free society," she said.

"Canada's National Observer joins CAJ and other news media in calling on the court to assist in bringing an end to exclusion zones. Journalists are not participants in protests or advocates, but professionals doing a vital job."

We wish you success but the

We wish you success but the BC Supreme Court seems pretty industry and RCMP focussed.