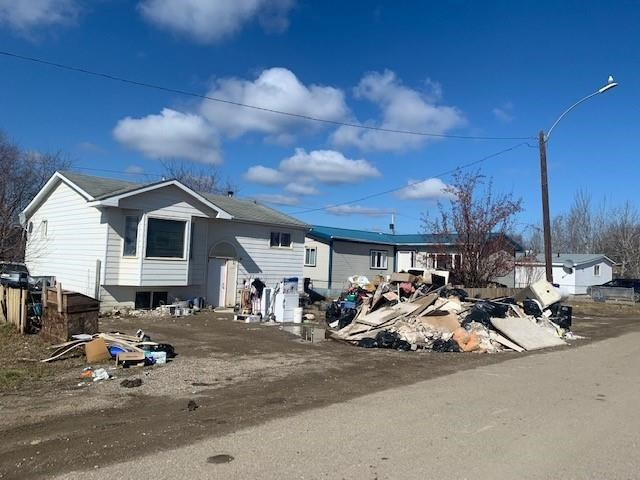 Homes damaged by historic levels of flooding are seen in Fort Simpson, N.W.T., on Thursday, May 20, 2021.The Canadian Press/Sean Whelly
Previous story
Next story

FORT SIMPSON, N.W.T. — A village in the Northwest Territories is looking to rebuild what has been lost after the worst flooding in more than 50 years destroyed homes and businesses.

Fort Simpson's 1,200 people were forced from their homes earlier this month by record water levels during ice breakup on the Mackenzie River.

Most have now returned, but Mayor Sean Whelly estimates more than 30 homes are unlivable after water damaged hot-water tanks and furnaces. At least 10 homes on the river's edge were destroyed, he said.

"People are living in cold houses with no hot water. Some of them have medical issues, mental-health issues. People are stressed right out," Whelly said in an interview.

A charter airline's business was also badly damaged and a hotel was so flooded that "you could have canoed in front of it."

Whelly said some residents are staying in a hotel, while some are living with family in the village or in other communities.

Fort Simpson is waiting on funds from the federal disaster assistance program, which flows through the territorial government, to help rebuild some of what was lost, he said.

"People are emotionally and physically drained."

The mayor is also worried repairs won't be completed by the end of the territory's short summer season.

"We need a much faster response from the territorial government here," he said. "We're not really seeing any explanation (about) the program for assistance, and whether the government's willing to step up over and above any disaster assistance, particularly for hard-hit homeowners and businesses."

Fort Simpson residents are returning to frigid homes and ruin in the wake of massive #flood. #NWT

The N.W.T.'s standing committee on accountability and oversight met Tuesday to discuss disaster assistance for communities affected by the flooding, including Fort Simpson and Jean Marie River.

Municipal Affairs Minister Paulie Chinna visited both and said the damage is extensive.

The disaster assistance program requires that residents pay for their own repairs and then get reimbursed.

Caitlin Cleveland, member of the legislature for Kam Lake, questioned why the funds couldn't be given to the communities upfront.

"What that ends up saying to people is if you have disposable funds, or if you have access to a loan, then you can access the disaster assistance policy," Cleveland said.

Laura Gareau, deputy minister of municipal affairs, said the federal program does not provide full reimbursements and the territorial government has to put up some funds too.

"To be eligible for the disaster financial assistance program, we have to ensure that the policy in structured so that we meet Canada's eligibility," Gareau said.

Legislature members were still unsure about how flooded communities could get access to the funding.

Chinna said residents who start rebuilding their homes should keep receipts to be reimbursed for those costs. The territory's housing corporation is also visiting the affected communities to support those who may not be able to pay rebuilding costs in advance.

"We're trying to find ways where we can eliminate where they would have to be paying for the renovations upfront."

Chinna said an assessor will visit each community to evaluate damage.

Whelly said he hopes the government comes up with a plan as soon as possible.

"I don't think the government is intending to leave people permanently hanging. It's just the nature of government to be slow in responding to these things.

"Once the water disappears, the problems don't really go away."

This report by The Canadian Press was first published May 28, 2021

The biblical flood that will drown California