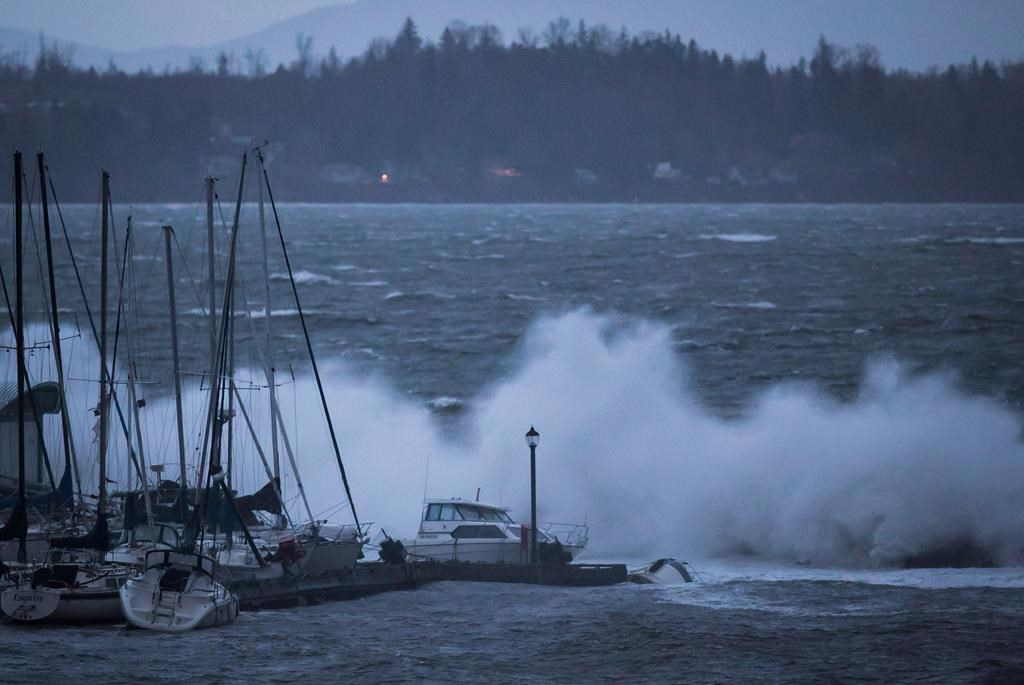 Boats are battered by waves at the end of the White Rock Pier that was severely damaged during a windstorm, in White Rock, B.C., on Thursday, Dec. 20, 2018. THE CANADIAN PRESS/Darryl Dyck
Previous story
Next story

VANCOUVER — Parts of British Columbia could see massive losses if the province doesn’t start planning for flooding as ocean waters rise and storms surge due to climate change, says a researcher at the University of B.C. in Vancouver.

Lokman recently received a $1-million grant for a four-year project dubbed "Living with Water," which aims to set the foundation for a comprehensive, co-ordinated coastal flood adaptation plan in the province.

The findings will be available in an open-source database that will function as a toolkit to help communities plan for the future, he said.

The resources should help local and regional governments evaluate the merits and trade-offs of different adaptation options, he said, from reinforcing existing shorelines to retreating to higher ground.

"We have time," said Lokman. "But we need a concerted effort and we need to be strategic in terms of how we protect, where we protect and when."

The majority of B.C. residents live within a few kilometres of the province’s coastline, with more than 60 per cent living in the Lower Mainland.

Sea levels in the region are expected to rise around half a metre by 2050 and one metre by 2100, according to a report commissioned by the B.C. Environment Ministry in 2013, while coastlines in Atlantic Canada may be even more sensitive to encroaching ocean waters.

But communities still lack the technical and ecological knowledge, policy guidance, funding and other supports they need, said Lokman.

Parts of British Columbia could see massive losses if the province doesn’t start planning for flooding as ocean waters rise and storms surge due to climate change, says a researcher at the University of B.C. in Vancouver. #climatechange

NASA has measured sea level rise along the U.S. west coast near B.C. at 0.4 inches, or just over one centimetre, per year in the last five years.

One of the most serious consequences of rising seas is the risk of extreme flooding typically associated with storm surges coinciding with high tides.

"If we wouldn’t have storm surges, it would be a lot easier," said Lokman.

The Vancouver International Airport and critical shipping infrastructure in B.C.’s Lower Mainland are vulnerable to coastal flooding, he said.

Swaths of B.C.’s agricultural land reserve are located in the Fraser River floodplain and surging water could threaten food security, he added.

Sandbags can be found along the shore of popular beaches in Vancouver during "king tides" to limit nuisance flooding, said Lokman, noting the highest tides of the season are a good indicator of what’s to come.

"Where we’re seeing flooding (with) king tide now, those areas will be permanently flooded, likely, with half a metre sea level rise."

The losses from rising seas and storm surges could be "tremendous," said Lokman, from coastal habitats to real estate to culturally significant sites.

The best approaches to adaptation in some populous areas are conventional options like dikes and sea walls, said Lokman, pointing to False Creek in Vancouver. The inlet is lined with condos and major infrastructure, including the Vancouver Canucks’ hockey arena and Granville Island, a popular artist and tourist hub.

Other places are candidates for nature-based options for mitigating rising waters, such as floating wetlands and kelp beds, clam gardens and living dikes built up from sediment deposits instead of concrete, said Lokman.

Such solutions can protect coastal habitats and wetlands that store carbon more efficiently than any other natural ecosystem, including forests.

Living with Water involves partners across B.C.’s southern coast, including municipalities, legal experts and the Squamish and Tsleil-Waututh First Nations, as well as the provincial government, said Lokman.

The first step among the array of interdisciplinary researchers and project partners is to develop a shared understanding of what coastal adaptation means, he said, including how to integrate Indigenous knowledge.

Representatives for the ministry did not immediately respond to questions about the province’s plans to address sea level rise and floods.

The Pacific Institute for Climate Solutions is funding the project.

It’s a sign of the times when you have a Coastal Adaptation Lab. Kees Lokman, the UBC professor who is leading the study, occupies a key vantage point relatively early in the century before many of the more serious effects of climate-induced sea rise manifest themselves. Good luck to him!

The report will no doubt touch on some of the issues currently being addressed by municipalities to one degree or another. The low-lying city of Richmond is fulfilling its program of raising its 42 kilometres of perimeter dikes by one metre and improving drainage infrastructure, which it expects will protect the city until the end of the century.

Considering that this timeframe is but a single lifetime away, one may wonder if that is enough given the high rate of dense urbanization occurring there today. What are the limitations to urban growth there over the next 80 years, given the constrained heights buildings can achieve on soft alluvial soils where bedrock is not within reach? What is the maximum weight of diking that the underlying geotechnical conditions can bear before they sink? What is the maximum height of the dikes given the known compression rates of the soils?

The province is also considering replacing the 4-lane George Massey Tunnel with an 8-lane tunnel, a change from the monster 10-lane high level freeway with an LA-scale 21-lane Steveston interchange proposed by the previous government. Freeway madness taking the form of a tunnel and expanded highway lanes in a delta that is one metre below high tide levels under current conditions with 1/2 metre more to come in less than 40 years — does that not constitute a need for superior engineering? Or is it head-in-the sand engineering?

Another problem is salt water infiltration from below ground. Higher tides put more hydrostatic pressure on ground water, and Richmond’s water table is nearly at the surface already. Liquifaction of the water logged soft soils during earthquakes is another challenge that will require a high degree of critical thinking on heavy dikes, buried storm drains, buildings, farmland and so forth as the sea inexorably rises. How far did Richmond take these considerations in their planning?

Then you have the dilemma of protecting Canada’s best quality food-producing soils in the Fraser Valley. Decade-over-decade rising tidal heights on top of the spring freshet from the 90,000 km2 Fraser River watershed (very large and devastating historical floods have occurred) in an active seismic zone. Are these not components that, when taken together, require extraordinary planning, super challenging engineering, deep budgets and vision-inducing forward thinking from traditionally short-sighted politicos? How on Earth is adaptation (e.g. wetlands, designated areas to allow flooding) even possible over such large areas without a net loss of food production capacity for a growing metropolis?

The more radical solutions may well be necessary post-2060. These include strategic retreat, massive coastal armouring where geotechnical conditions permit, building floating cities and farmland, or a combination.

On strategic retreat, this assumes that other cities in Metro Vancouver will have to start absorbing 350,000 residents from Richmond, Ladner, Delta and other low-lying municipalities round about mid-century. Physically, that is easy. But politically, the city of Vancouver will need to get over its insanely traditional timidity and upzone the 80% of residential districts that are currently protected as detached homes on large lots (i.e. low-density sprawl, with a minor tweak for laneway homes) for the past 75+ years, even under great demographic and economic pressure.

Vancouver has no vacant land left for new development, therein the forces pushing against accommodating even gentle and reasonable infill in low density neighbourhoods are building. My guess is that Vancouver alone can absorb at least 350,000 more taxpaying, economic multiplier citizens with rowhouses and low rise three or four-storey walk ups alone, and well above sea rise estimates for at least 200 years. Include Surrey, Coquitlam, Burnaby, New Westminster and other higher elevation cities in the Metro, and growing to 6+ million and beyond within the realm of comfortable urbanism is not impossible.

There is also the nearly 40 km2 of the city (~330 km2 in the Metro) that are consumed by publicly owned and maintained road infrastructure. In a century where you’d expect our egregious car dependency to plateau then decline in favour of transit and walkable urbanism, repurposing single-digit percentage points currently buried under asphalt seems like a no brainer. Copenhagen liberated 100,000 m2 (25 acres) of downtown land from the Almighty Car and devoted it to human beings in the form of a treasured, popular pedestrian street network and a significant uptick in downtown business activity.

Adapting to sea level rise requires us to think big. Are there enough big thinkers at the decision-making level to do the job?