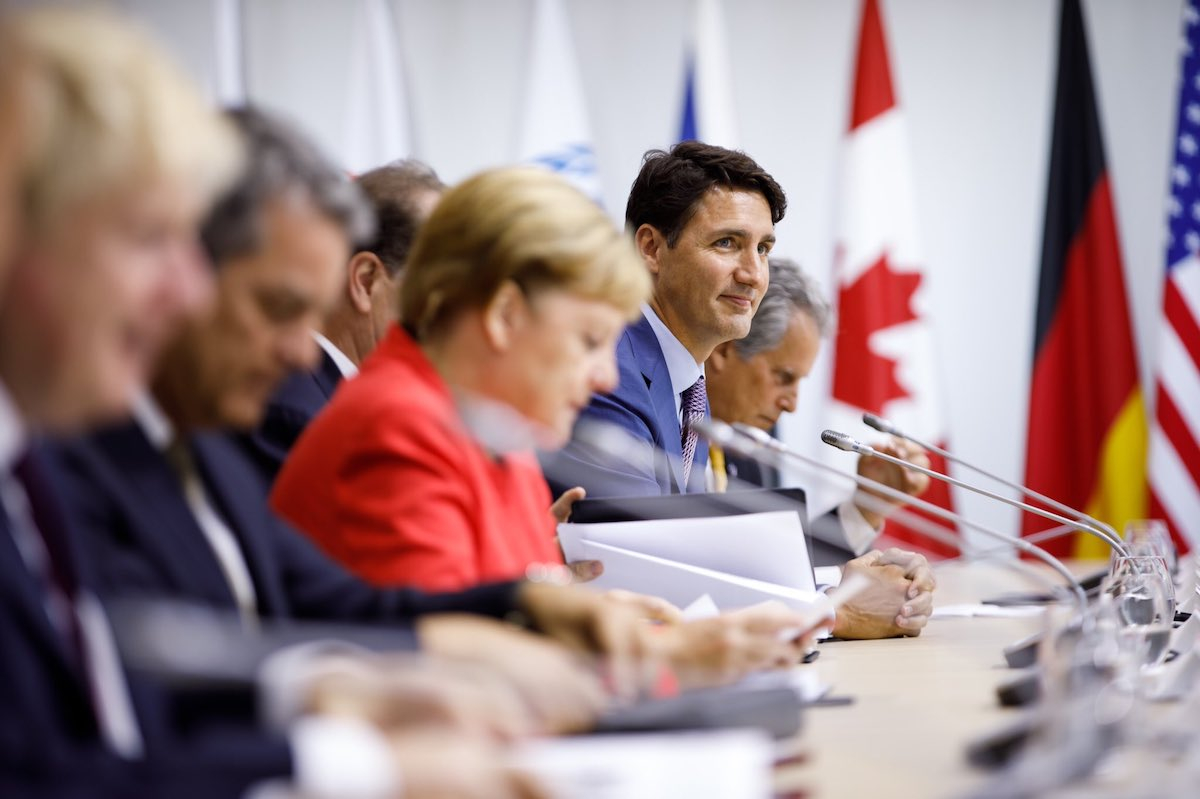 From 2016 to 2019, Canada’s emissions leapt 3.3 per cent, according to a new report. Trudeau photo / Twitter
Previous story
Next story

Later this month, Prime Minister Justin Trudeau will meet his G7 colleagues with an unenviable climate record on the books. Canada has had the highest emission growth of its peers since the Paris Agreement was signed.

From 2016 to 2019, Canada’s emissions leapt 3.3 per cent, according to a new report authored by earth scientist David Hughes and co-published by the Canadian Centre for Policy Alternatives, the Corporate Mapping Project, the Parkland Institute, Stand.earth, West Coast Environmental Law and 350.org.

That emission creep is far more than the United States’ 0.6 per cent growth over that same period, and represents a major failing compared to the other five G7 countries, which managed to curb greenhouse gas (GHG) emissions by 4.4 per cent to 10.8 per cent.

“We have politicians that are trying to please everybody and are making totally counter-productive policy decisions,” said Hughes, calling it a “stark contradiction between government priorities, which are building the Trans Mountain Expansion to the coast… (and) reducing emissions by 40 per cent by 2030.”

“It’s going to lead to continuous growth for as long as the resource inputs hold out, and then a crash, a very painful crash,” he said.

In late April, Ottawa committed to a 40 per cent GHG reduction from 2005 levels by 2030 at the same time it plans to grow the oil and gas sector that is responsible for a quarter of the country’s emissions.

“So we've got 39 per cent to go in nine years,” he said, warning that the low-hanging fruit of phasing out coal is in the rearview mirror and the next phase of decarbonization will be even more challenging.

Assuming the government continues to implement climate policies, the Canada Energy Regulator (CER) forecasts the oil and gas sector will cause Canada to miss its Paris Agreement target of an 80 per cent reduction from 2005 levels by 2050, let alone the target of “net zero” proposed in Bill C-12.

“Even if you reduce emissions from every other sector of the economy to zero, we'd still miss an 80 per cent reduction target by 32 per cent in 2050,” said Hughes. “However, we claim that we're going to get to net zero by 2050, so the numbers just don't make any sense.”

#Canada has the worst record of any #G7 country when it comes to reducing greenhouse gas emissions. #GHGs #cdnpoli #emissions

The report notes that under CER’s pipeline export capacity forecasts neither the Trans Mountain pipeline expansion or the Keystone XL pipeline are needed, and it calls for the cancellation of both and any other pipeline projects CER deems unnecessary. Further, it says if a liquefied natural gas (LNG) export industry is developed in British Columbia, the province’s CleanBC climate plan would be impossible to achieve.

The CER estimates oil and gas exports will grow 42 per cent and 186 per cent, respectively, by 2050, with domestic demand falling over that time. Oil production is predicted to peak in 2039 and then fall through 2050.

That forecast estimates all production growth occurring in Alberta and British Columbia, at 13 and 146 per cent, respectively. Meanwhile, the CER’s modelling forecasts a 12 per cent decline in production in Saskatchewan and a staggering 99 per cent drop in Newfoundland and Labrador.

However, the modelling does not take into account Newfoundland and Labrador Premier Andrew Furey’s recent attempts to attract new exploration to that province’s offshore, nor tentative plans swirling on the island to use hydropower from Labrador’s Churchill River to power offshore oil rigs.

“Clearly if Canada is to have any hope of meeting its emissions-reductions targets, the oil and gas production sector will have to reduce emissions to a level far below what is projected in the CER evolving scenario,” reads the report.

“The only way this can be done is to radically reduce production, and cutting production will have economic impacts.”

The energy sector represents about nine per cent of total GDP and is essentially the country’s dividing line between which provinces are making GHG progress and which aren’t. The oil- and gas-producing provinces of Alberta, Saskatchewan, Manitoba, British Columbia and Newfoundland and Labrador all saw emissions climb from 2005 to 2019, while Ontario, Quebec, Nova Scotia, New Brunswick and Prince Edward Island all saw emissions fall significantly, largely owing to the phaseout of coal-fired plants.

While Ottawa sets new GHG reduction targets, the report highlights that since 2000, fossil fuel companies have extracted more and paid less for it. Over that time, royalty revenue is down 45 per cent despite record production, and tax revenues from the oil and gas sector have fallen to less than four per cent in 2018 of all industry taxes, compared to over 14 per cent in 2009. These cuts represent billions of dollars of lost revenue.

Hughes says the reason for lower collection is due the price of oil dropping and government incentives to encourage more drilling.

Because Canada has heavy energy demands in winter not easily satisfied by existing renewable power, Hughes says the country will depend on oil and gas to some extent for the foreseeable future, which is why he’s against selling the resources off for diminishing returns.

“It is cold up here, likely we are going to need some of that gas and some of that oil, and it's finite and industry always takes the best stuff first… We're selling off the best of what we have left, destroying our emissions targets and getting nothing for it,” he said.

This article has been updated to clarify that Canada's energy sector represents about nine per cent of total GDP, with petroleum products representing 5.3 per cent.

Lofty climate goals will only get you so far, Canada

Well, this is actually no

Well, this is actually no surprise. National Observor and others have been warning us of this miserable circumstance for months - nay, years.

We can thank the latent colonial midset that still bedevils Canadians. Putting all our eggs in the extraction sector - most notably fossil fuels and provinces are still "mining" the earth to create wealth. NOt just the oil and gas wells, but also, if you think about it, the dams and drowned lands that pepper our landscape for the sole purpose of generating hydro powered electricity. Unlike beaver dams hydro dams destroy fish habitat, create toxins from the drowned vegetation, and disrupt the entire natural water and land ecosystem. Instead of wielding chainsaws, and monstrous mega machinery to reshape and strip the forest and mineral assets of the nation - why is it Canada, despite its world class Universities, cannot seem to use the brains of its citizens to create wealth instead of misusing the land and waters on which actual life depends?