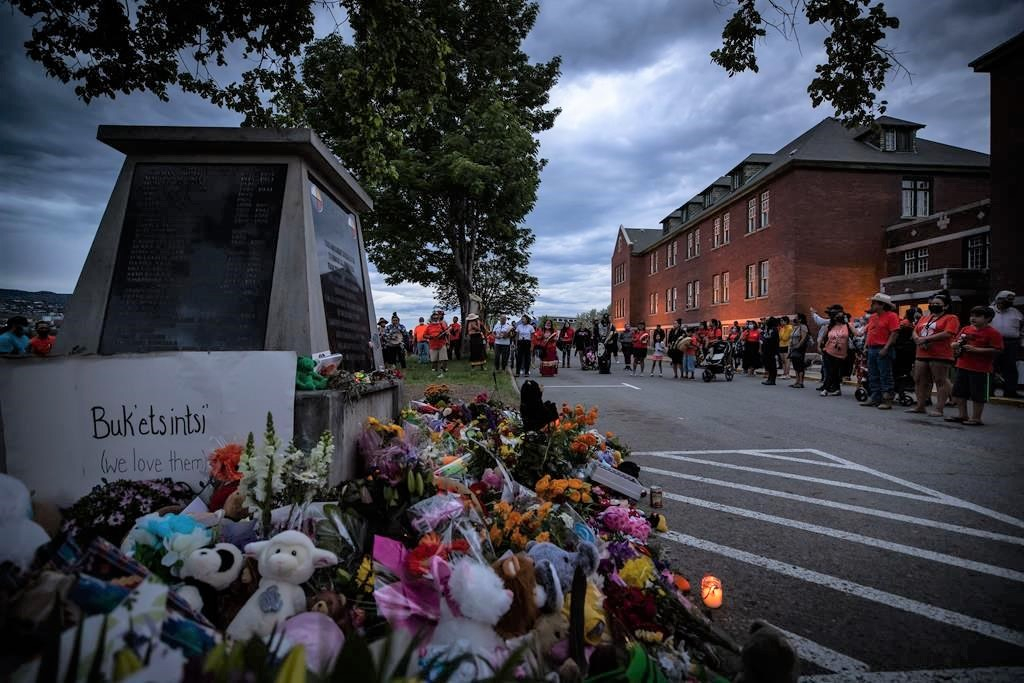 People sing and drum outside the former Kamloops Indian Residential School to honour the 215 children whose remains have been discovered buried near the facility, in Kamloops, B.C., on May 31, 2021. Photo by: The Canadian Press/Darryl Dyck
Previous story
Next story

VANCOUVER — A lack of access to records and first-hand data would hinder the ability to identify the remains of 215 children found at a former residential school in Kamloops, says the director of the Indian Residential School History and Dialogue Centre at the University of British Columbia.

Mary Ellen Turpel-Lafond said the federal government and churches have fought over making the school records available to groups working to identify victims of the residential school system for more than 20 years.

The response from politicians and church officials that the discovery is "shocking" rings hollow, she said, as Indigenous people have tried to raise awareness about the issue for years.

Indigenous children from 36 communities across B.C.'s Interior are recorded as having attended the school, while data collected by the history and dialogue centre lists 38 additional communities from where children were sent to the school between 1943 and 1952.

Turpel-Lafond, a lawyer and former judge who is of Cree and Scottish descent, said she's also heard anecdotal evidence of children from Alberta and Yukon attending the school, which had a peak enrolment of up to 500 students in the 1950s.

It was operated by the Catholic Church from 1890 to 1969 as a residential school before it was taken over by the federal government to serve as a local day school until 1978.

The Tk'emlups te Secwepemc First Nation said last week that the remains of the 215 children were found by a ground-penetrating radar specialist.

The work to identify the remains would have to compare sources including oral history, church records, records from local authorities and lists of children who may have returned home to their respective communities in one year but not the next, Turpel-Lafond said.

"To me, the dead children themselves in this Kamloops school, and others, have human rights," she said. "We have an obligation to them to provide respect for the deceased and take practical steps to address the indignity that might've been done to them and their bodies."

It won't be easy to identify the bodies of children found at a former Kamloops residential school without church records. #Kamloops #residentialschool

The Truth and Reconciliation Commission has records of 51 children dying at the school.

The Missionary Oblates of Mary Immaculate ran about 47 per cent of Canada's residential schools, including the one in Kamloops. The Oblates have refused to release their records to help identify the remains found and did not return a request for comment on the matter.

Father Ken Thorson, the provincial superior of the Oblates, said in a statement earlier this week that the order is growing into a "deepening awareness" of the harm to Indigenous people caused by colonization and the role it played.

"We will be fully transparent with our archives and records regarding all residential schools, and strongly urge all other Catholic and government organizations to do the same," he said in a statement on Wednesday.

Even if that information was available, a forensic human identification expert said the community faces further hurdles in finding relevant DNA comparisons to identify the victims where direct descendants are no longer alive.

Megan Bassendale, the director of the Vancouver-based company Forensic Guardians International, said the process of DNA analysis can take time.

"It's long, it's expensive and it has to be done really well the first time. If you lose the trust of the families, then it's over," said Bassendale, who previously worked to help identify remains found in mass grave sites in former republics of the Soviet Union.

Finding close DNA data, such as a mother or father of the victim, or identifying features from health and dental records may be hard at a site that operated for decades, she added.

Bassendale said it may require scientists to test DNA from a mother and father's family lines to narrow down who the person could be, which is a more complex process.

However, she is hopeful identities can be found.

"We know how to do this; it's not new. It's not even uncommon," Bassendale said. "It's uncommon for Canada."

"Can it be done? Yes," she said. "I'm absolutely confident if we had access to all of the records, government records, oral history and we have people co-operating."

This report by The Canadian Press was first published June 3, 2021.

We do know what they have to

Use the courts to obtain the

Use the courts to obtain the records from the church organization(s) who ran the schools. Select a target group, a concentration of likely relations and collect all DNA. Set up a DNA data bank and as the bodies' DNA are recovered, compare them. This would identify family groups who would most certainly be able to provide historical information that would/could lead to identifying the bodies/victims. I should think the responsible church organizations who were responsible would be quite reluctant to co-operate considering the legal consequences that could occur.