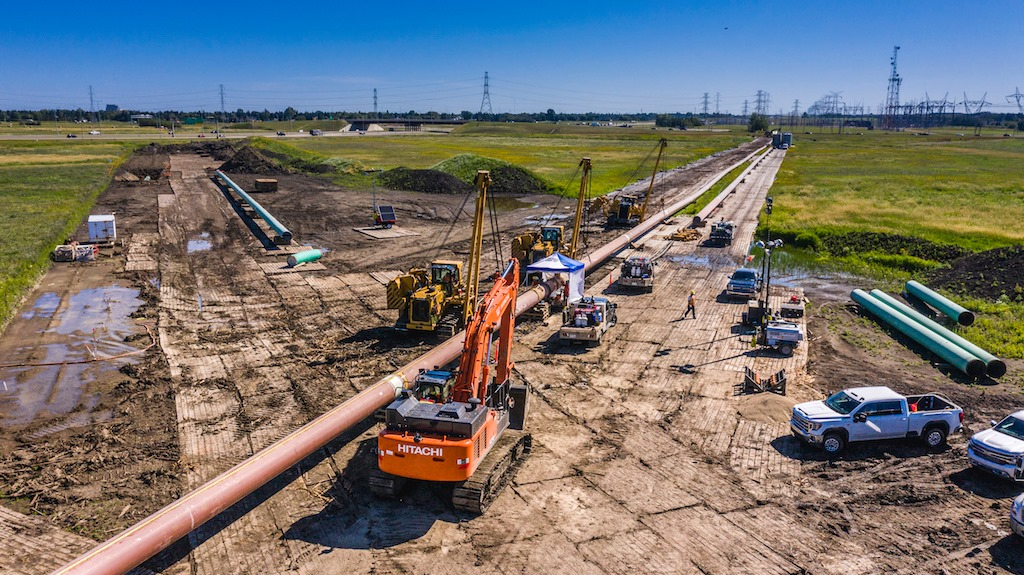 Argo Group’s decision to drop Trans Mountain comes on the heels of two other insurers, Munich Re and Talanx, refusing to insure the pipeline last June, and lead insurer Zurich Insurance Group severing ties in July.

“This type of project is not currently within Argo's risk appetite,” Argo spokesperson David Snowden said in an email. Snowden confirmed Argo also considers the Trans Mountain Expansion project, which would carry 590,000 barrels a day from the oilsands to British Columbia, too risky but did not say why.

“As Argo Group has not yet made any such commitments to rule out Trans Mountain or tar sands more broadly, I am writing to let you know that you are currently on the list of targets for an upcoming week of action that is spotlighting the insurance backers of the Trans Mountain pipeline,” they wrote.

“If Argo publicly states — by June 4, 2021 — that it will rule out insurance services for the existing Trans Mountain pipeline and the pipeline expansion for 2021-2022 and in perpetuity thereafter, then we will ensure that you are no longer a target for the global week of action,” they added.

The Canada Energy Regulator (CER) recently gave Trans Mountain the go-ahead to shield its list of insurers from the public for this reason. Trans Mountain argued if it could not keep its insurers private going forward, “targeting and pressure” could result in a “material loss” to the company and “prejudice the competitive position of its insurers.”

Further, Trans Mountain warned in a letter to the CER that in 2020 it had a “significant reduction” in available insurance and paid “significantly higher” premiums to cover the gaps. In other words, there are fewer insurers willing to back the project, which could make it more difficult to secure the $1 billion worth of coverage, lines of credit, or cash on hand, it requires to operate.

West Coast Environmental Law staff lawyer Eugene Kung said there is a growing trend in the insurance industry to re-evaluate projects with significant environmental risk because the way the insurance business model works is breaking down.

“The insurance model is to use historical data and claims history to try to forecast and project forward and capture the risk that way,” Kung explained. “But when it comes to climate and climate-related incidents, what we're seeing, as was predicted, is that they're happening more frequently and more severely as time goes on.”

Kung said the strategy against fossil fuels isn’t to make it more expensive for companies by introducing risks, but rather for the longstanding risks to finally be recognized.

“The fundamental part of this challenge is that oil and gas has been priced at the cost of extraction rather than the cost to society, that's at the crux of the climate crisis,” he said.

For Tiny House Warriors co-founder and Secwepemc and Ktunaxa land defender Kanahus Manuel, Argo cutting its ties with Trans Mountain is a relief.

“When my father was alive he was really spearheading the resistance against the insurance companies, because we were all fighting and resisting in different ways,” she said.

Manuel’s father is Arthur Manuel, the prominent Indigenous leader and activist who wrote The Reconciliation Manifesto and Unsettling Canada and started the Indigenous Network on Economies and Trade organization.

“He says when you go to these international bodies, you walk in like you're the owner of 180,000 square kilometres of land, because that's what you are,” she said.

That title to the land is “where the risk starts to come” in, because you’re changing an “outdated system” where “companies can come in and plow through Indigenous Peoples and their rights,” she said.

“We're calling on these insurance companies to stop underwriting these destructive projects,” she said. “Any infrastructure that comes from the tar sands we're saying stop it.”

Trans Mountain’s insurance broker is New York City-headquartered Marsh Inc. The pipeline’s current policy is scheduled to expire at the end of August.

Its remaining insurers include Liberty Mutual, Chubb and AIG. All are expected to be targeted by Indigenous and climate activists during a global week of action later this month designed to pressure the companies to drop Trans Mountain.

bravo. FOLLOW THE MONEY.
Citizens can refuse to have mortgages held by tarsands-supporting 5 big canadian Banks. Go to a credit union instead and write a letter telling bank ceo why you are taking your business elsewhere

Some of these tactics are

Some of these tactics are brilliant. First the GOVERNMENT which is the owner of the pipeline by the way, gives permission to keep secret who these big insurers are. So the tactic is "poke all the bears" and what happens? More large insurers bolt. What happens when all insurers have abandoned the industry? Do we, the government, become not only the owners but also the underwriters?

Given the history of the

Given the history of the nuclear industry, I'd expect the answer to that question would be "yes".