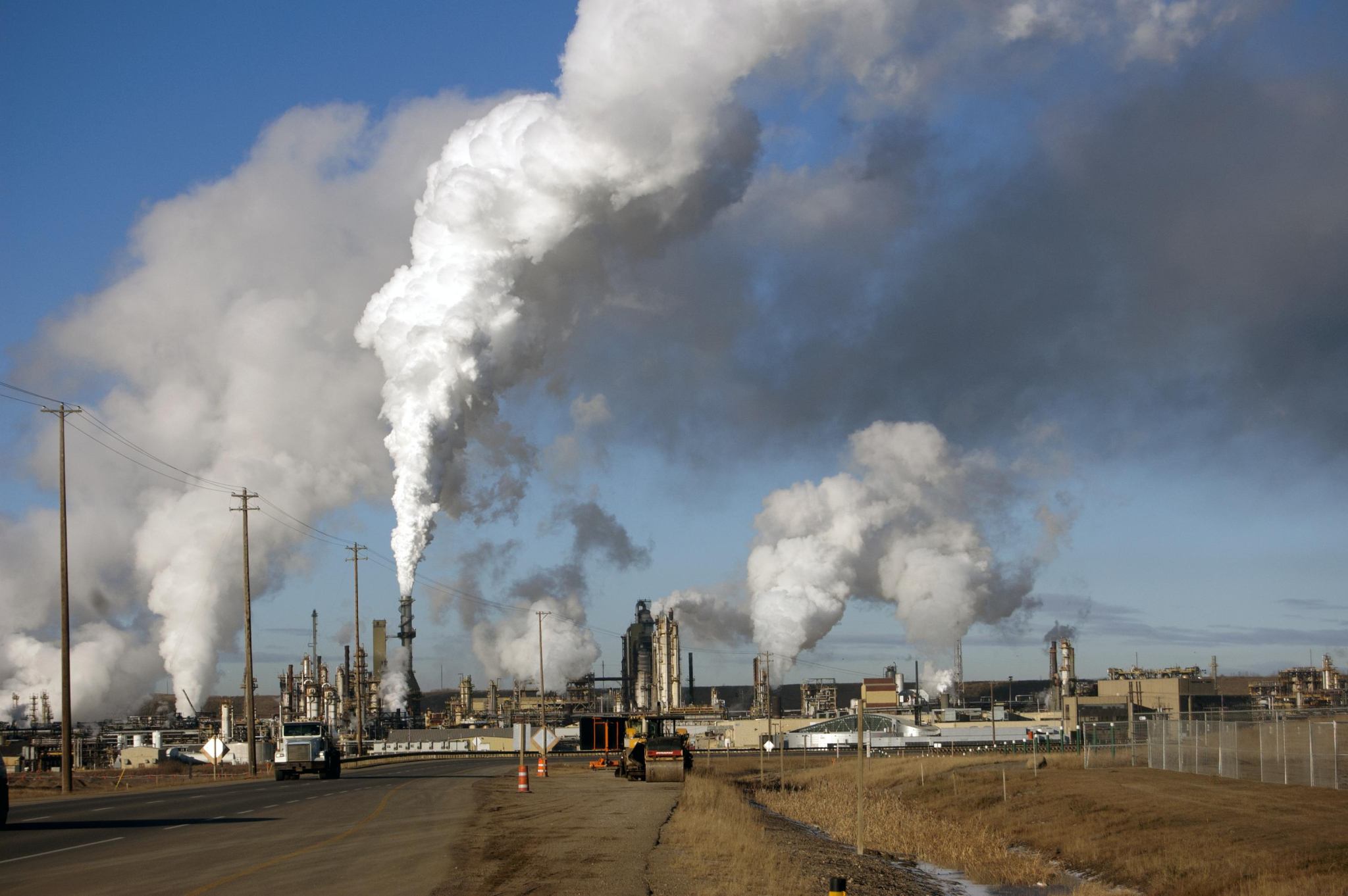 Used as intended, fossil fuels cause global warming. It’s time for Canada to move beyond the rhetoric and plan for a carbon-constrained world. Photo by Wikimedia Commons
Previous story
Next story

It has been a tough few weeks for the global oil industry. Exxon and Chevron’s shareholders are demanding stronger climate action. Royal Dutch Shell was ordered by a Dutch court to reduce its emissions by 45 per cent by 2030. And the International Energy Agency (IEA) concluded that the Paris Agreement goal to limit global warming to 1.5 C demands a 75 per cent reduction in oil consumption by 2050, with no investments in new fossil fuel supply starting today.

Within days, oilsands heavyweight Suncor announced new targets to reduce its greenhouse gas emissions to 30 per cent below its 2019 level by 2030 and to achieve net-zero by 2050. This week, five Canadian oil companies joined forces in a new Pathways to Net Zero initiative, the goal of which is to achieve net-zero in oilsands operations by 2050.

While we applaud emissions reductions by any sector, we weigh oil and gas industry climate commitments with considerable skepticism. The industry has a history of rhetorical strategies that understate its contribution to climate change and overstate its progress. Let’s consider four of those strategies.

The first is to conflate oil and gas with “energy.” The euphemism has been spectacularly successful (as was an earlier shift from “tar sands” to “oilsands”). Media and politicians today routinely refer to the oil and gas industry as the energy sector.

“Energy” highlights the benefit of fossil fuels while downplaying that this particular energy source accounts for 75 per cent of global greenhouse gas emissions. In so doing, it sidesteps a critical conversation about which forms of energy Canada will rely on and which products we will export in years to come.

A second rhetorical strategy is to select metrics and baselines that present the industry’s performance in the most positive light. A familiar example is to emphasize declining emissions intensity per barrel, even as absolute emissions are increasing.

Suncor employed the favourable reference point strategy in committing to reductions relative to 2019, rather than Canada’s Paris Agreement baseline of 2005. It’s understandable for any company to track an improvement from the date of an operational change. However, there’s no ignoring the 19 per cent emissions increase in oil and gas emissions from 2005 to 2019.

Even if the entire industry matched Suncor’s new target — which it has not — that would amount to a 16 per cent reduction from that sector between 2005 and 2030, far short of Canada’s target to cut emissions by 40 per cent to 45 per cent. The implication is that other industries and households would need to pick up the slack by making cuts more than three times greater than the oil industry’s.

A third rhetorical strategy is to emphasize distant goals rather than current performance. We’ve heard a lot about Canadian producers’ goal to match the least carbon-intensive crudes globally. Many, including a Globe and Mail columnist, apparently have concluded that we are already there or close to meeting that goal. In fact, peer-reviewed research published in leading journals in 2018 and 2020 concluded that Canada’s heavy oil ranks among the most carbon-intensive in the world. A followup study found variation depending on specific producer-refinery combinations, but did not challenge the greater carbon intensity of Canada’s unconventional oil.

There’s certainly ample room for improvement, but our competitors have similar incentives — and a big head start.

As pressure builds on oil and gas companies, some major players are making big climate pledges. We should weigh them with considerable skepticism, write @ProfKHarrison, @molszyns and @pmmcc. #ClimateAction

The latest aspirational target is “net-zero” by 2050. We’re struck that the oilsands initiative announced this week makes no mention of any target before 2050, even though Canada has a looming 2030 Paris Agreement target.

Net-zero is an appropriate goal for wealthy countries like Canada. It’s more problematic, however, for individual companies, whose promises often rest on highly optimistic assumptions about abundance of carbon sequestration and/or innovations to dramatically reduce the costs of negative emissions technologies. It is telling that the IEA’s 1.5 C report reserved negative emissions primarily for industries for which reductions are especially costly and to buy humanity time to stabilize the climate, while anticipating a deep and lower-cost shift from fossil fuels to renewables.

Bold industry commitments also often rest on government funding. The new Pathways initiative emphasizes the need for “collaboration” with the federal and provincial governments, a thinly veiled call for taxpayers to subsidize the oil industry’s reduction of its own pollution.

A final rhetorical strategy is to consider only the emissions associated with production, rather than the full life cycle, which also includes refining and fuel combustion. This is the approach taken both by Suncor and the new Pathways initiative partners.

There is a rationale for this, since under the Paris Agreement, Canada is only accountable for emissions within its borders. Refining and combustion, which account for the majority of emissions per barrel of Canadian oil, occur in the countries where we export three-quarters of our production.

There are, however, problems with ignoring Canada’s contribution to global emissions. There is widespread misunderstanding that industry’s net-zero commitments refer to all emissions, not just the fraction released during extraction.

Moreover, in ignoring downstream emissions, we also ignore the economic risk Canada faces when destination countries act to reduce their own emissions. Canada’s oil is especially vulnerable to contraction of global markets by virtue of its high cost and high carbon intensity. Investing tens of billions of industry’s and taxpayers’ dollars in carbon capture and sequestration only makes sense if we assume the rest of the world will keep consuming lots of oil, despite availability of lower-cost energy alternatives.

Used as intended, fossil fuels cause global warming. It’s time for Canada to move beyond the rhetoric and plan for a carbon-constrained world.

Martin Olszynski is an associate professor at the University of Calgary's Faculty of Law.

Patrick McCurdy (PhD, LSE) is an associate professor in the department of communication at the University of Ottawa.

Denialism 2.0.
"The IEA concluded that the Paris Agreement goal to limit global warming to 1.5 C demands a 75% reduction in oil consumption by 2050, with no investments in new fossil fuel supply starting today."
A safe bet that the oilsands industry, Ottawa, the AB Govt, and the Big Banks have every intention of ignoring the IEA's net-zero blueprint by 2050 and every IPCC report ever published.
*
Bold industry commitments also often rest on govt funding.
So much for polluter pay.
"The companies say the [Pathways to Net Zero] project will need significant investments and was made possible because of support programs from the federal and Alberta governments."
https://www.nationalobserver.com/2021/06/09/news/group-large-oilsands-op...
Oil companies are happy to reduce their grossly under-reported upstream emissions as long as taxpayers foot the bill. Taxpayers will be on the hook for carbon capture and SMRs, as well as cleanup and reclamation afterwards. Privatize the profits, socialize the costs. The fossil fuel industry's business model.
How do they propose to capture the 80% of emissions from a barrel of oil when it is combusted at the consumer end? Tiny carbon capture facilities on every tailpipe?
While auto makers are banking on the EV revolution, the oil industry is betting against it.

Conflating oil and gas with

Conflating oil and gas with energy.
Indeed. CAPP, oily politicians, and Postmedia columnists routinely conflate oil & gas with the energy sector as a whole — inflating oil & gas job and GDP stats by taking credit for contributions from other sectors, such as nuclear, hydro, coal, and renewables.
In recent years, oilsands emissions intensity has decreased in part because a smaller share of bitumen is being upgraded at home in favor of more raw dilbit exports. This simply transfers emissions to U.S. refineries. An accounting trick. Expect this trend to continue as long as Canadian crude exports rise.

In the absence of leadership by Ottawa, our energy future and climate policy will largely be determined by market forces and foreign governments. The U.S., in particular.
Canada refuses to accept the realities of climate change, technological transformation, and shifting energy markets. The goal is to delay the transition as long as possible. Keep the sunset fossil fuel industry on life support. Protect industry profits. Bank on climate action failure. Set Alberta up for more severe economic crashes. Finally, hit the wall. Stranded assets. Surrender.

Exactly my friend. And it

Exactly my friend. And it seems to me the good news is that more and more of us are waking up to the fantasy BS oil and gas boosters keep rolling out. The government investments in blue hydrogen is another waste of time and money........but sure to guarantee over leveraged companies can continue to frack our back country to death for a few more years.

Blue hydrogen isn't any solution to our climate emergency....it is one more brainwave of the ethically bankrupt....designed to keep the oil and gas industry alive. Have you heard the latest lying phrase: renewable gas????
Any idea what toxic legacy they intend to saddle the public with....from that hot air?

This is an excellent summary of all the tactics being used by the most dishonest industry on earth. Mining for fossil fuels, shipping the extracted raw materials for upgrading, refining and distribution all generate CO2. When the public burns the 0 net product in their autos, furnaces, gas fired appliances CO2 is released....

As for Carbon Capture, the only way it makes sense is if we're no longer burning fossil fuels. Then we might turn our attention to sucking some greenhouse gases out of the atmosphere and sequestering them somewhere safe. Though where that might be is also a problem, and developing those dungeons will also require burning fossil fuels most likely.

The Oil and Gas industry is built on false promises, faulty research and reporting, and outright lies. Bitumen is Oil remember???

Even though it isn't even able to flow without CO2 intensive additions of toxic light hydrocarbons.....Big Lying Oil barons like G. Morgan advise pseudo liberal politicians, and those bitumen pipelines keep being built over the protests of the people who live along their routes.

Net 0??? There is no way to get there starting from where we are. The IEA itself tells us what we have to do. Shut the lying bastards down.

In respect of the failure to

In respect of the failure to plan for a carbon-constrained world, the lack of provision for a carbon budget in federal climate Bill C-12 (https://www.nationalobserver.com/2021/06/09/news/wheres-accountability-s...) is telling. Environment minister Wilkinson is unwilling to accept accountability for meeting national climate goals.