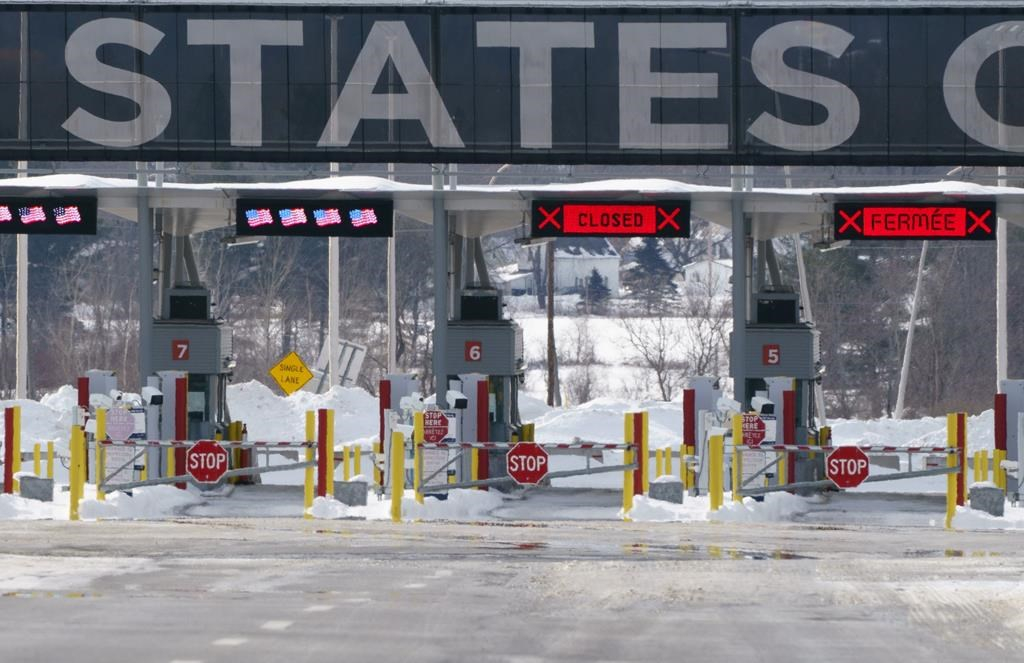 The border crossing into the United States is seen during the COVID-19 pandemic in Lacolle, Que. on February 12, 2021. File photo by The Canadian Press/Paul Chiasson
Previous story
Next story

Intergovernmental Affairs Minister Dominic LeBlanc is signalling that Canadians can expect an announcement by Monday on easing pandemic travel restrictions.

But he warned Tuesday that the relaxed rules won't necessarily go into effect immediately. And he stressed that the restrictions will be phased out slowly and cautiously and only so long as vaccination rates continue to climb and the number of COVID-19 cases in Canada continues to decline.

The government has been deciding on a monthly basis whether to renew the restrictions, with the current orders-in-council due to expire Monday.

"Next week we’ll have more to say about measures that will be in place at both the land borders and the air arrivals at the four designated airports," LeBlanc told a pandemic briefing Tuesday.

"The good news is we hope and believe these measures can evolve in a phased appropriate way over the next number of weeks. We’ll have more to say about those specific measures and the implementation details in the coming days."

He added that "this shouldn’t be a surprise because we talked about potential measures that could be phased in at some point in July."

While the government is signalling "some modest phased-in adjustments at the border" on Monday, LeBlanc said, "it doesn't have to take effect on the 21st of June."

The government has already said it will relax quarantine protocols in early July for fully vaccinated citizens who are eligible to return to Canada.

Currently, all non-essential travel into Canada is prohibited, with limited exceptions. Those allowed to enter face multiple COVID-19 test requirements and must quarantine for 14 days.

Travellers arriving by air can land at only four designated airports in Canada and must quarantine, at least initially and at their own expense, in a designated hotel.

Business groups have been pressuring the government to ease up on travel restrictions, particularly at the Canada-U.S. border. The hard-hit tourism, hospitality and airlines sectors in particular are hoping for relaxed rules that will allow some resumption of tourist travel.

"In a perfect world we would have been able to set dates with a long runway but, unfortunately, COVID hasn't given the world this opportunity," he said.

He noted that the United Kingdom has had to adjust its reopening schedule due to a rise in cases of the more transmissible Delta variant of the virus.

"Canada is not immune from having to make those adjustments."

Chief public health officer Dr. Theresa Tam said she expects travel restrictions will be relaxed somewhat for travellers who've been fully vaccinated. But she said it will be a long time before restrictions can be entirely lifted.

"One would expect the borders are not going to be the same as what they were before the pandemic and additional measures will be applied for a significant length of time until the world is a different place," she said.

Prime Minister Justin Trudeau and U.S. President Joe Biden talked about the land border restrictions during a discussion on the sidelines of this week's G7 summit. LeBlanc said conversations between the two countries are continuing, led by Public Safety Minister Bill Blair.

Canada is also working with the provinces, the U.S., the European Union and other allies on development of a secure, reliable way to recognize proof of vaccination, LeBlanc said.

Are Canada's provinces reopening too fast given uptick in Delta variant?

Vaccinations put Canada on the path to reopening