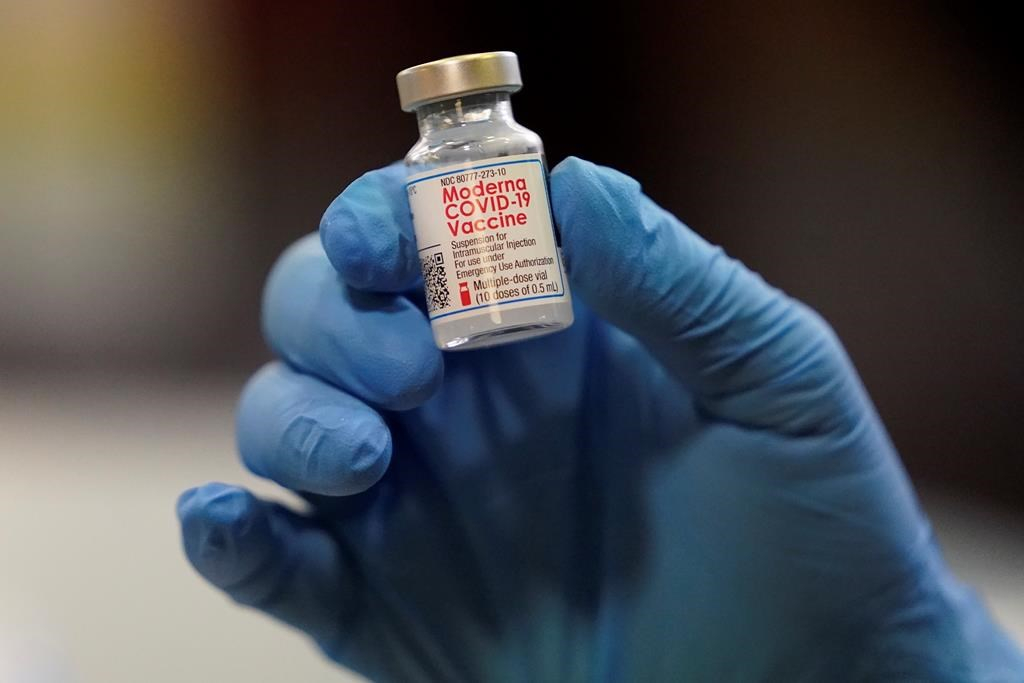 A vial of the Moderna COVID-19 vaccine is displayed at a pop-up vaccine clinic for EMS workers Center in Salt Lake City on January 5, 2021. File photo by The Associated Press/Rick Bowmer
Previous story
Next story

A Vancouver couple accused of flying to a remote Yukon community to get the COVID-19 vaccine will have to answer for their alleged actions in a courtroom.

Former Great Canadian Gaming Corp. CEO Rodney Baker and his wife, Ekaterina Baker, were given summary tickets last week for violating the territory's Civil Emergency Measures Act, which carries fines of up to $1,000, plus fees.

Yukon Community Services Minister John Streicker said Wednesday those tickets have been stayed and the same charges are being served upon the couple on a longer-form information, with a notice to appear in court in Whitehorse.

The distinction means that if they are convicted, they could also serve up to six months in jail.

"I have to say I'm outraged by this selfish behaviour. All of us as Yukoners are outraged," Streicker told a news conference Wednesday. "I find it disturbing that people would choose to put fellow Canadians at risk in this manner."

A request for comment from the couple sent to Ekaterina Baker's email was not immediately returned.

Streicker confirmed the pair had been served with the new information Wednesday afternoon. Their court date is scheduled for May 4 in Whitehorse.

Streicker said the RCMP is also looking at the case. The Mounties in Yukon did not immediately respond to a request for comment.

Great Canadian Gaming said it accepted Baker's resignation on Sunday. Baker earned a total of about $6.7 million in compensation from the company in 2019, according to an information circular published by the company last year.

A #Vancouver couple accused of flying to a remote #Yukon community to get the #COVID19 #vaccine will have to answer for their alleged actions in a courtroom. #Covid19vaccine #RodneyBaker #EkaterinaBaker

Streicker said last week the couple allegedly chartered a plane to the small community of Beaver Creek, posed as visiting workers and received shots of a COVID-19 vaccine at a mobile clinic.

The White River First Nation in Beaver Creek was prioritized to receive the vaccine because of its remoteness, its elderly population and limited access to health care, said Chief Angela Demit.

Streicker said Wednesday that he was not aware of any efforts by the couple to get in touch with the First Nation to apologize.

The minister also said the territory will change its eligibility requirements for the COVID-19 vaccine, after the couple's alleged behaviour "sent a jitter through the system."

People who have health cards from a different province or territory will now have to also show proof of local employment or residency, such as a utility bill, he said.

However, he stressed that if a resident is concerned they don't have the right identification, they can get in touch and the government will work with them to make sure they get immunized.

"I also want to emphasize that all Yukoners are able to get the vaccine when it is their turn. Please don't miss this opportunity to get vaccinated. Thankfully, and to the credit of all those involved in the effort, the vaccine rollout is going really well."

Some 5,170 people have been vaccinated in the Yukon and the territory is on track to immunize all adult residents well before most other parts of Canada, Streicker said.

In rural and remote areas, residents 18 and older can receive a vaccine at a mobile clinic, while in larger communities, including Whitehorse, people 65 and over are currently being immunized.

People 60 and over can book appointments starting Feb. 1, and everyone 18 and over can receive a shot as of Feb. 10.

The territory has no active cases of COVID-19.

Yukon's chief medical officer of health, Dr. Brendan Hanley, said his team did a detailed risk assessment after the Vancouver couple allegedly entered Beaver Creek to get the vaccine.

Hanley said even if one presumed the couple was positive for COVID-19, he is confident there was no risk of exposure to the pilot of the chartered flight or other community members.

B.C.'s provincial health officer, Dr. Bonnie Henry, has said the pair will not be prioritized to receive a second dose of the vaccine and will have to wait until it is their turn under B.C.'s age-based system.

— By Laura Dhillon Kane in Vancouver.