COVID-19 cases drop in Ontario and Quebec, but variants cause concern 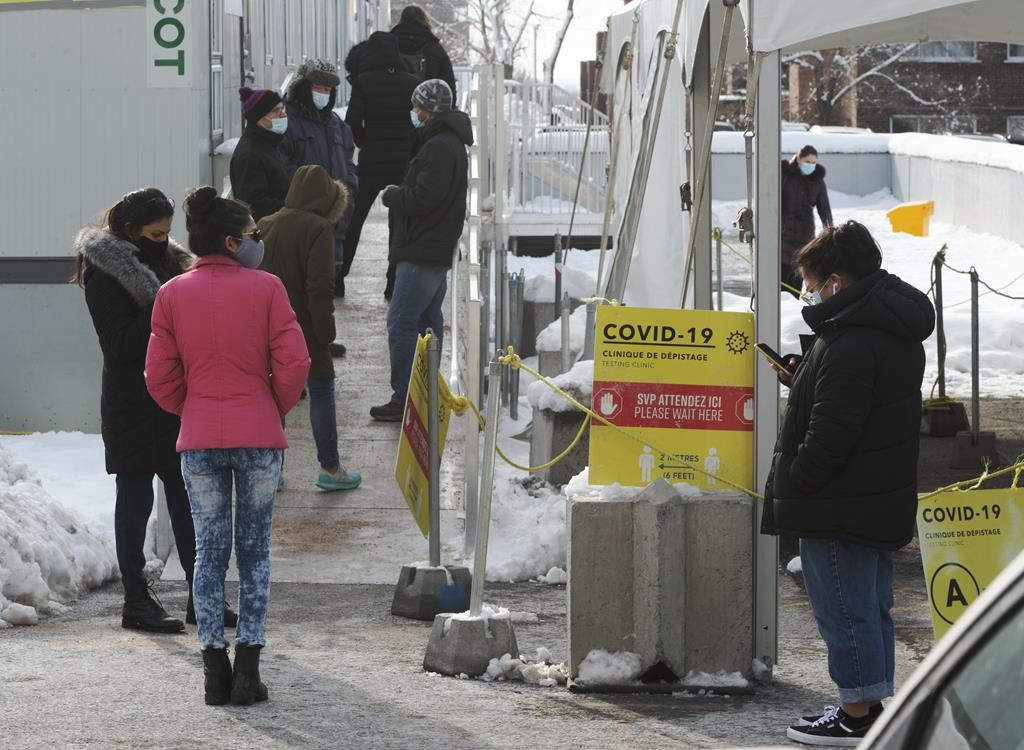 People line up at a COVID-19 testing clinic, on Tuesday, January 19, 2021 in Montreal. Photo by The Canadian Press/Ryan Remiorz
Previous story
Next story

Amid concerns about the emergence of variant strains, new COVID-19 infections maintained a downward trend in Canada's two most populous provinces on Wednesday, although authorities reported more than 100 new deaths from the disease.

Public health officials have raised concerns about the emergence of variants of the novel coronavirus, believed to be far more contagious. While the numbers of confirmed cases remained small, testing has only just begun to ramp up.

"It is a huge concern particularly at this point of the pandemic, when we are seeing downward trending of daily new cases across the country," said Dr. Nazeem Muhajarine, an epidemiologist at the University of Saskatchewan. "This could actually see those trending down, reversing and going up again."

One public health unit in Ontario is urging anyone who travelled outside the region to get tested for COVID-19 given the new, more aggressive variants.

The medical officer of health for the Kingston, Frontenac and Lennox and Addington region said a person infected with a new strain contracted the virus through community spread elsewhere in Ontario. However, the case is apparently unrelated to an outbreak at a long-term care home in Barrie, Ont., driven by the variant known as B.1.1.7., which has infected 200 people.

Quebec said Wednesday it would not challenge a court order exempting the homeless from a provincewide curfew. Premier Francois Legault had previously refused the exemption after a man was found dead this month in a portable toilet near a homeless shelter in Montreal.

"Since the start of the curfew, our desire has been for people experiencing homelessness to be guided to the right resources and not to judicialize them," said Lionel Carmant, the junior health minister.

Public health officials grappled with several hot spots elsewhere in the country, including the Toronto area and Edmundston in northwestern New Brunswick, where doctors warned the pandemic virus could spiral out of control quickly.

Several doctors urged people in the Edmundston region, under a 14-day lockdown that began Sunday, to follow guidelines, get tested and to stay home if ill. The area has almost half the 339 active cases reported in the province.

Amid concerns about the emergence of variant #strains, new #COVID19 infections maintained a downward trend in #Canada's two most populous provinces on Wednesday.

The military, too, has been grappling with a recent surge in COVID-19. Latest data indicated almost 250 cases so far this month, a huge jump from the roughly 75 per month recorded in the first nine months of the pandemic.

Prisons and jails have seen increasing case numbers as well. Federally, 1,232 inmates have been infected, while Ontario's Maplehurst Correctional Complex was dealing with 94 active cases.

Canada Post confirmed a worker at the Gateway East plant in Mississauga, Ont., died from coronavirus disease. The service has reported 224 cases at the facility and warned of mail-processing delays.

The federal Indigenous services minister said he was disgusted by a Vancouver couple accused of flying to a remote Yukon community for COVID-19 vaccinations. Marc Miller called the alleged actions by Rodney Baker, the former CEO of the Great Canadian Gaming Corp., and his wife Ekaterina Baker as "maybe the dumbest thing" he’d seen in a long time.

Yukon Community Services Minister John Streicker said last week the couple allegedly chartered a plane to Beaver Creek near the Alaska border, posed as visiting workers and were given vaccinations at a mobile clinic operated by the White River First Nation.

They were given summary tickets last week for violating the territory's Civil Emergency Measures Act, which carried fines of up to $1,000, plus fees.

Streicker said Wednesday those tickets have been stayed and the same charges are being served upon the couple with a notice to appear in court in Whitehorse.

The distinction means that if they are convicted, they could also serve up to six months in jail.

In Victoria, B.C. Premier John Horgan asked people to follow public health guidelines, saying it's disconcerting that some people are holding large gatherings in Vancouver penthouses and others are looking for parties in Whistler.

He also highlighted the case of the couple who allegedly went to Yukon to get vaccinated.

"I believe there's nothing more un-Canadian than going to another jurisdiction to jump the line because you have the means to do so," Horgan said at a news conference. "Those are the types of examples we want to put in our rear-view mirror."

Statistics Canada said 19 police services, servicing most of the country, reported select criminal incidents such as assault fell 18 per cent between March and October 2020, compared with the same period a year earlier.

Service calls — particularly for wellness checks, domestic disturbances and mental health — were up eight per cent, the agency reported.