One million chickens euthanized due to Quebec labour dispute 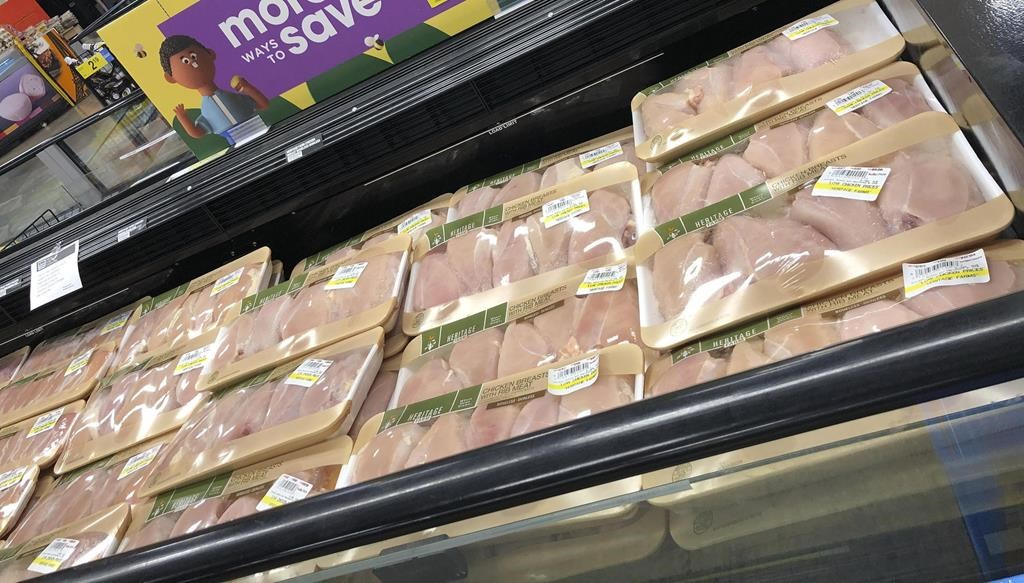 A case filled with packages of boneless chicken breasts is shown in a grocery store on Sunday, May 10, 2020, in southeast Denver. File photo by The Associated Press/David Zalubowski
Previous story
Next story

The head of an association representing Quebec chicken producers says it is unacceptable that one million chickens have been euthanized during an extended labour dispute at a slaughterhouse near Quebec City.

The Exceldor co-operative closed its slaughterhouse in St-Ansèlme, Que., south of the provincial capital, on May 23 due to a strike, leaving few options for chicken producers.

Pierre-Luc Leblanc, president of Les Éleveurs de Volailles du Québec — the province's association of chicken producers — said he's never received as many calls and messages from members as in the past few weeks, unsure of how to handle the situation.

"People are telling me they are offended, mad and sad," he said. "It's not an easy situation because there's not a lot of solutions for us."

"There are rules for producers: when you transport the chickens, you are allowed to have only one per cent rate mortality. If you go beyond that, you can get a fine for animal cruelty," Leblanc said. "But right now, we are allowing that many chickens to be killed."

Both the union and the company have confirmed the one million discarded chickens would have provided up to four million meals.

The union said the strike has forced Quebec producers to send euthanized chickens either to waste sites or to a rendering plant, where they can be transformed into products not for human consumption.

Exceldor spokesman Jordan Ouellet said the company tried to send as many chickens as possible to other slaughterhouses in Quebec or Ontario.

"The problem is that at one point, after 35 days, when chickens reach a certain weight, they are ready to be transformed," Ouellet said. "But beyond that, they continue to grow and infrastructures are not made for those sizes."

Premier François Legault described the situation in a Facebook post on Wednesday as a "shame that needs to stop."

One million #chickens #Euthanized during labour dispute at #Quebec slaughterhouse.

Legault urged both sides to take up the province on its offer of an arbitrator to help resolve the matter, noting that the waste amounts to 13 per cent of the province's chicken production being throw in the garbage.

The company and the union representing its striking employees continued talks Thursday.

Exceldor welcomed Quebec's offer, first made Tuesday by Labour Minister Jean Boulet, but the union has refused, saying it would prefer to continue with negotiations with a conciliator rather than have a third party impose a collective agreement.

Workers at the slaughterhouse have been without a contract since July 2020 and have been on strike for more than three weeks, with salaries and working conditions key sticking points.

"We have to give the conciliation process a chance," said Roxane Larouche, spokeswoman for the United Food and Commercial Workers union. "Of course, we are sensitive to food waste, there is no one who wants that. But it is the employer's responsibility."

Boulet agreed in an interview Thursday that the large rate of euthanasia and food waste was making the situation even more urgent, but was confident both sides understand the human and social repercussions and hoped they will soon find common ground.

This report by The Canadian Press was first published on June 17, 2021.