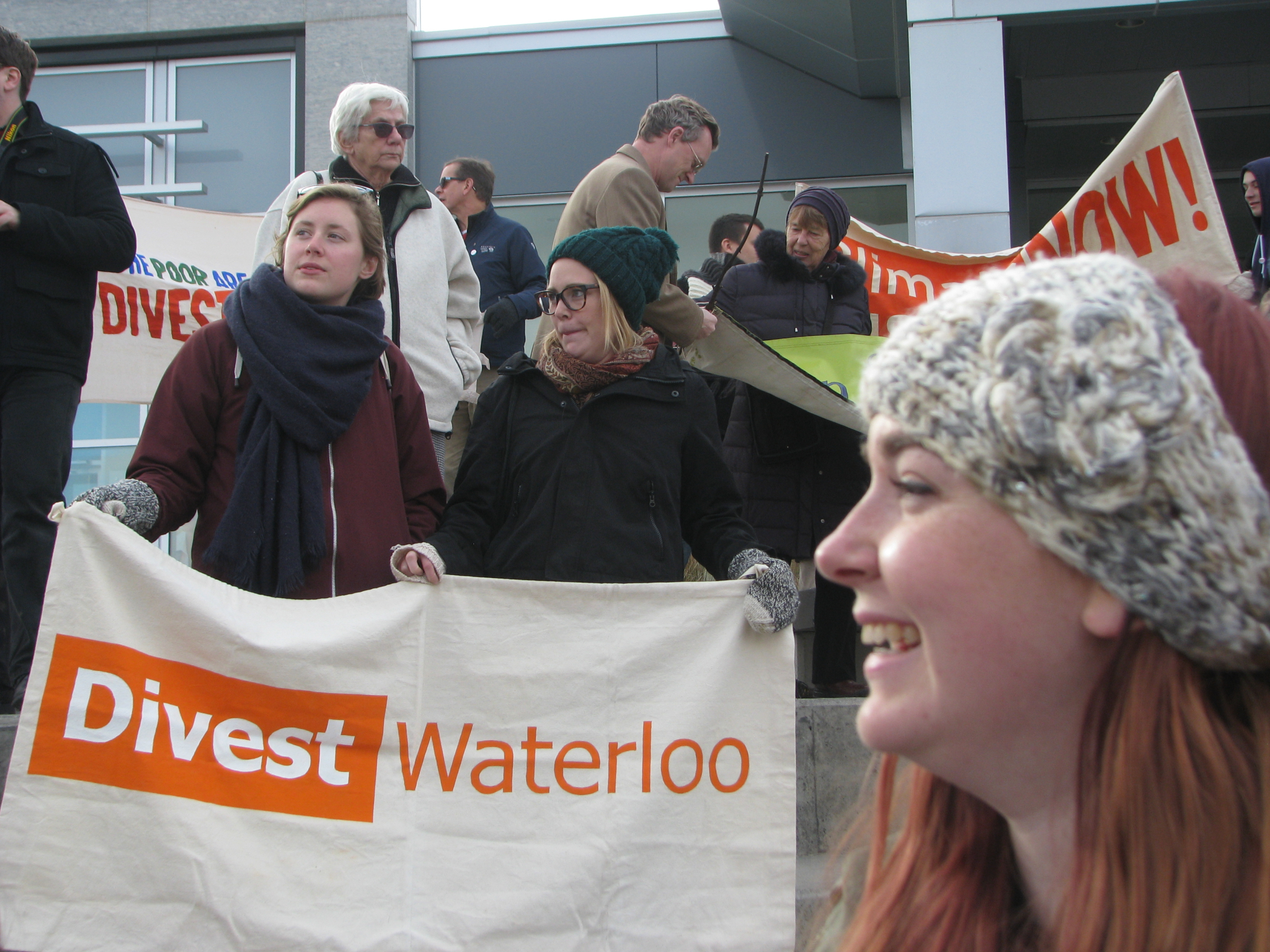 On June 1, the University of Waterloo student group Fossil Free UW (FFUW) celebrated UW’s decision to pass the Investing to Address Climate Change report. This report, presented at the board of governors meeting, effectively divests all the university’s pension and endowment funds from the fossil fuel industry by 2025. This is the culmination of six years of efforts, supported by more than 2,000 students and 400 faculty members who signed an open letter demanding divestment.

The recommendations were presented in a report by the Responsible Investment Advisory Group (RIAG), a subcommittee of the Finance and Investment Committee, in which FFUW members were included. The report features two key portfolio emission reduction targets: a 50 per cent reduction in carbon exposure in both its pension and endowment funds by 2030, and achieving carbon neutrality by 2040. Through these efforts, it is expected that the university’s active equity managers will hold no material positions in fossil fuel exploration and extraction companies by 2025 — a move we are calling “divestment by another name.”

Divestment as a movement has been quickly picking up momentum over the past few years. With this new plan, UW joins seven other Canadian universities that have made similar commitments, such as the University of Victoria in February, as well as Lakehead University and the University of Guelph in 2020. These are among over 1,300 institutions worldwide that have divested a total of $14 trillion.

Coming from a research-focused institution, UW’s decision emphasizes the importance of decarbonization and divestment from fossil fuels as a science-based and financially prudent approach to responsible investing, and accompanies a growing interest and acceptance regarding divestment.

FFUW was created in 2015 to put pressure on the University of Waterloo to divest its holdings from fossil fuel companies, building on an informal divestment movement started in the faculty of environment. Early efforts included a vote from the Waterloo Environment Students’ Endowment Fund in 2016 calling for the university to divest, as well as a Responsible Investment Working Group that introduced environmental, social and governance standards to the university’s investments.

A turning point in FFUW’s success was the September 2019 climate strike, which brought 1,400 UW students together in the most massive global climate strike to date. This incredible show of solidarity and demand for stronger climate action grew through 2020, and came to a head when UW’s president Feridun Hamdullahpur asked the Finance and Investment Committee to establish the RIAG. The group, formed in January, was composed of student representatives, faculty and board members. The resulting report is rigorous and holistic, and sets a high bar for future decarbonization and divestment commitments.

However, this move is just one (big) step on the road to climate justice. The divestment movement continues to grow past just university endowments. A coalition of faculty and staff at the University of Toronto, University of Guelph and Queen’s University is calling on the incoming University Pension Plan, soon to be responsible for pensions at all three institutions, to divest the funds from fossil fuels. UW’s recent commitments, which extend to pension funds as well as endowment, will hopefully serve to support this campaign. Groups like Banking on a Better Future are extending the call for fossil fuel divestment to banks, and divestment groups (such as members of the Divest Canada Coalition) are continuing to push their institutions for not only divestment, but reinvestment into sustainable solutions.

Moving even further, divestment is only a part of the solution, being limited in that it does not address the underlying imperative of infinite economic growth inherent in our current system or the colonial foundations of our extractive industries. Supply-side restrictions on fossil fuels could help with this. The Senate is debating Bill C-12, our first climate target accountability act. However, it must include more science-based targets, centre decolonization and independent experts, and be clear with the fact that we need to begin phasing out fossil fuels to avoid the worst of climate change.

Fortunately, on the global stage, external pressures towards divestment and supply-side restriction grows. Recently, the International Energy Association produced a report on the world’s pathway to remain under 1.5 C of warming, which decisively deems new oil and gas exploration unnecessary and dangerous. A court in the Netherlands passed judgment soon after requiring Shell to reduce its emissions by 45 per cent by 2030. These principles must be enshrined in law as well as institutional policy.

The University of Waterloo’s decision to recognize the role of the fossil fuel industry in perpetuating the climate crisis is a strong step in the right direction. While we celebrate the progress that we have achieved, we know that more work is still to be done to forge a more sustainable path forward for UW and for the world.

The University of Waterloo's recognition of the fossil fuel industry's role in worsening the climate crisis is a strong step in the right direction, write @UWaterloo students Michelle Angkasa, Petra Duff and Guy Brodsky. @divestcanada @fossilfreeUW

Michelle Angkasa is a second-year student working towards a bachelor’s of environmental studies at the University of Waterloo.

Petra Duff is an undergraduate mathematical physics student at the University of Waterloo and a core member of Fossil Free UW. She sat on the Responsible Investment Advisory Group that brought recommendations to decarbonize investments to the UW board of governors.

Guy Brodsky is a senior undergraduate student at the School of Environment, Resources and Sustainability at the University of Waterloo. He is a co-ordinator with the Divest Canada Coalition, a core member of Fossil Free UW and an organizer with Banking on a Better Future.