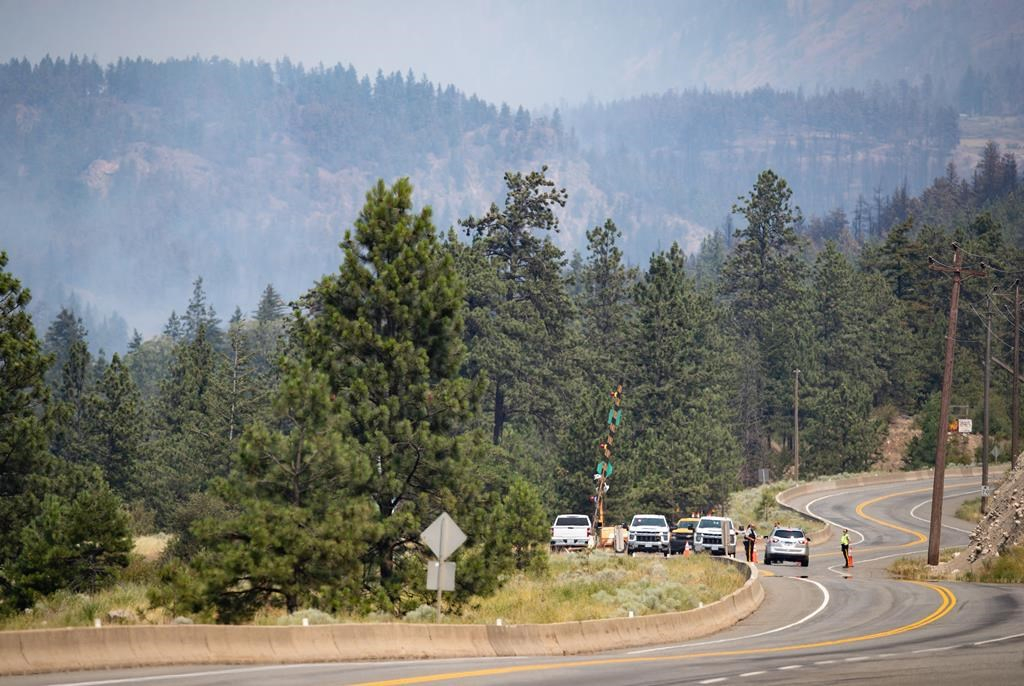 RCMP officers man a roadblock on the Trans-Canada Highway as wildfire burns in Lytton, B.C., on Friday, July 2, 2021. File photo by The Canadian Press/Darryl Dyck
Previous story
Next story

Mounties are on the scene in Lytton, B.C., working to determine what caused a fire that destroyed much of the village and left two people dead.

Dawn Roberts, the director of communications for the B.C. RCMP, told a news conference Sunday that investigators were able to access the village on Saturday.

"We have no timeline on how long it will take, but it will be thorough. We ask for everyone's patience to allow the investigation the time and space in order to determine the facts," she said.

Premier John Horgan previously said he had heard anecdotal evidence linking the start of the fire to a train running through the community.

Roberts said officers are working to track down witnesses or anyone who may have information about what caused the fire.

"We're very mindful that people that were in the area have likely been evacuated or are in different parts of the province right now," she said.

Roberts urged anyone who cannot trace or contact unaccounted family members or friends to reach out to RCMP.

But she said there are currently no active missing persons investigations.

Federal Public Safety Minister Bill Blair said in a statement posted to Twitter Sunday that the government has approved a request for assistance from B.C.

As climate change leads to more extreme weather events around the world, our government will always be there to keep Canadians safe. In response to devastating wildfires, we have approved a request for assistance for the province of British Columbia.

More than 100 firefighters are expected to arrive Monday, with preparations underway to limit any potential COVID-19 exposure.

Mounties are on the scene in #Lytton, #BC, working to determine what caused a fire that destroyed much of the village and left two people dead. #BCPoli #Wildfire

There are 174 active fires across the province, with 37 starting in the past 24 hours.

Cliff Chapman, the director of provincial operations with the BC Wildfire Service, said crews are expecting temperatures to return to seasonal norms this week.

Chapman and Pader Brach with Emergency Management BC also admitted to shortcomings in regard to communication with Indigenous communities.

"I think unfortunately we need to do a better job of ensuring the leader of those communities are part of the planning as we move forward," said Chapman.

Chief Matt Pasco, the head of the Nlaka'pamux Nation Tribal Council, said the first contact he received from the government came 12 hours after evacuations began, and it was regarding his cattle, not about affected community members.

Elsewhere, the Regional District of Central Kootenay says a wildfire burning near Castlegar, B.C., has been controlled and is expected to be completely contained by Sunday night.

An evacuation order remains in place for more than 100 homes 40 kilometres southwest of Kamloops, B.C., as an out-of-control wildfire continues to burn.

This report by The Canadian Press was first published July 4, 2021.

Two bodies discovered in the small town north of Hope