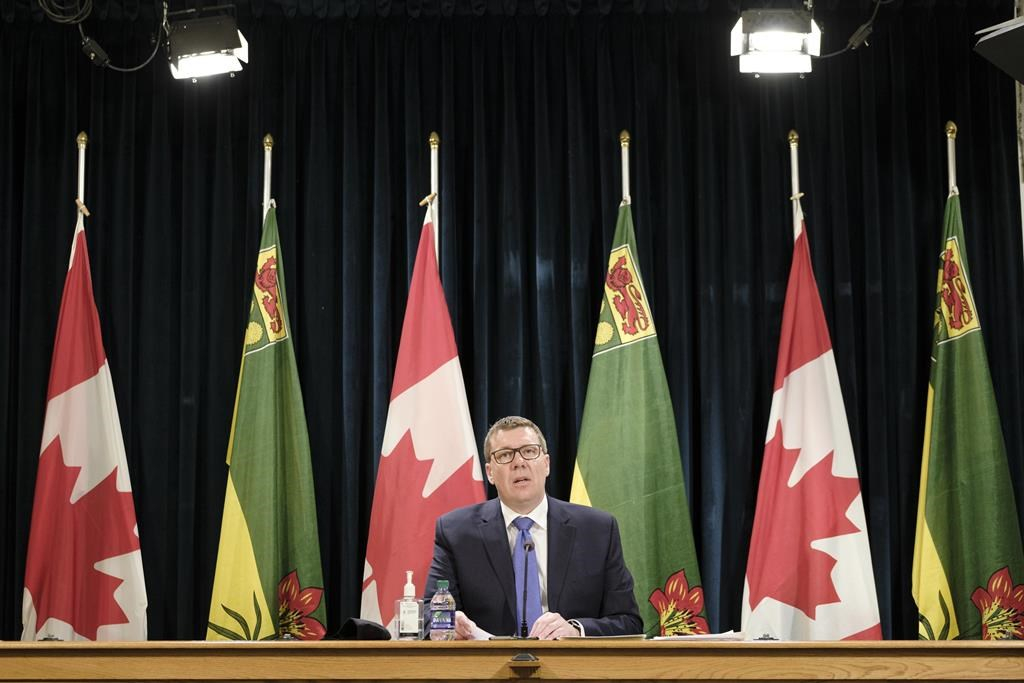 Saskatchewan Premier Scott Moe speaks at a press conference at the legislative building in Regina on March 25, 2021. Photo by Michael Bell / The Canadian Press
Previous story
Next story

REGINA — Premier Scott Moe says Ottawa has rejected Saskatchewan's plan for replacing the federal carbon price with one of its own, while the Liberal government is saying any proposed changes simply have to wait.

Moe announced that the province would submit a plan for approval after the Supreme Court of Canada in March ruled the Liberal government’s price on carbon was constitutional.

People in Saskatchewan have been paying the federal carbon price on fuel, but Moe's government had rejected that as being a punishing tax that made the province less competitive for business.

He said that Saskatchewan would introduce a carbon price similar to New Brunswick’s that would “provide an immediate rebate right at the pump.”

In a letter sent to his provincial counterpart, federal Environment and Climate Change Minister Jonathan Wilkinson says the federal government is updating its benchmark criteria for carbon pricing.

“Canada has committed to updating its approach to carbon pricing to make it more fair and rigorous,” reads the letter, which was shared with The Canadian Press.

“In the coming months, all provinces and territories will have the opportunity to propose, for the 2023-2030 period, carbon-pricing systems that meet these updated stringency criteria.”

The letter says one of the key changes will be a requirement for governments not to weaken a carbon price on fuel by providing upfront rebates or reducing fuel taxes to offset the price.

“As we are currently updating the benchmark to ensure fairness and consistency across Canada, and to provide certainty and stability for residents and businesses, at this stage the earliest any new or expanded system will be able to replace the backstop will be in January 2023,” Moira Kelly, Wilkinson's press secretary, said in a statement.

“We are pleased to see Saskatchewan's interest in developing a made-in-Saskatchewan pollution pricing plan, and remain open to conversations with Saskatchewan about what their system could look like going forward.”

Saskatchewan and Ottawa have disagreed for some years over the Liberal government's approach to reduce greenhouse gas emissions and fight climate change. #CarbonPricing #CarbonTax #ClimateCrisis

Moe said in a statement that it's an “arbitrary and political decision from Ottawa.” He said Saskatchewan's plan is similar to “other provincial programs previously accepted.”

“Saskatchewan has been denied the same policy framework that Ottawa has accepted for East Coast provinces,” he said. “The federal government's approach is arbitrary, and is penalizing western Canadian resource-producing provinces.”

Conservative MPs Dan Albas and Joël Godin also criticized the government's response to Saskatchewan's proposed plan, and said the Conservative party plans to bring the provinces together to talk about the next steps in climate action.

“Instead of working with Saskatchewan on a plan that works for their province, the Liberal government has rejected their plan and set an arbitrary date of two years for another plan,” they said in a statement. “These actions from the Trudeau Liberals show they are more interested in politics than working together to tackle the issue of climate change.”

Saskatchewan and Ottawa have disagreed for some years over the Liberal government's approach to reduce greenhouse gas emissions and fight climate change.

Saskatchewan Opposition Leader Ryan Meili said Moe has failed to bring in carbon pricing that works for the province and “won’t even show his work.”

“The Sask. Party’s failure to present a credible climate change plan has left Saskatchewan people subject to the federal carbon tax for the last three years,” the NDP leader said in a statement. “Now, because of the premier's political games, we will be stuck with Prime Minister Trudeau's plan for a further two years.”

The Liberals recently adopted legislation that commits Canada to reach net-zero emissions by 2050 and are supporting that goal with more aggressive policies to cut carbon-related pollution in transportation.

The government has also submitted plans to the United Nations ahead of an international climate summit to be held later this year promising that Canada will reduce its greenhouse gas emissions 40 to 45 per cent below 2005 levels by 2030.

It says it is on track to exceed the current target of 30 per cent under current measures.

— With files from Julia Peterson in Regina