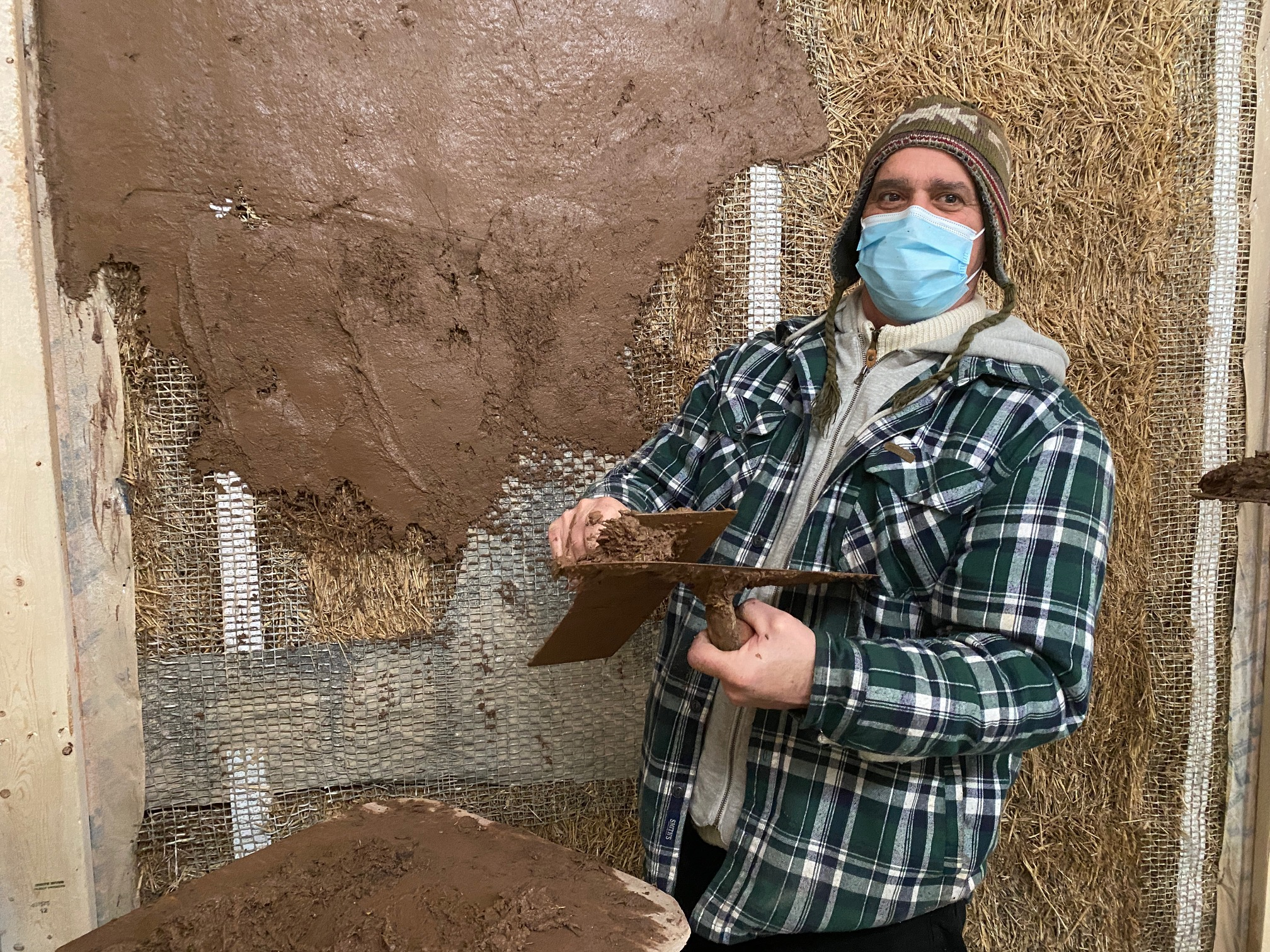 Jacob Rodenburg, executive director of Camp Kawartha, lends a hand during the building of its health centre. Photo courtesy of Deirdre McGahern
Previous story
Next story

Next to Clear Lake in Ontario sits 100-year-old Camp Kawartha in the tiny township of Douro-Dummer.

Some would say it’s an unlikely place to showcase an innovative green building program. However, the camp’s new nursing station was built using low-carbon construction methods utilized by Douro-Dummer in its efforts to lower greenhouse gas emissions. Nestled among wooden cabins and mosquitoes, the station was made more sustainable by straw bale walls and hemp insulation.

Many commonly used types of petrochemical foam insulations have extremely high carbon outputs. Cellulose insulation, a type of building material made from glucose, is cheaper, often made in Canada, and stores carbon. Straw bale, like what was used at Camp Kawartha, is also an option.

Deirdre McGahern, president of Straworks Inc. and a builder on the Camp Kawartha project, explains that when straw is grown in a field, it's capturing carbon from the atmosphere. As long as the straw bales are in the wall, acting as insulation, they’re also acting as a carbon sink. It means other parts of the building process that might be emitting carbon can be offset.

“Insulation is really a key part of the equation, just because it's one investment that continues to pay back over the long run. Because the more insulation that you have in your building, then the lower your operating emissions are going to be,” she said.

Brian Fawcett, the township’s chief building official, says Douro-Dummer’s Sustainable Development Program is the first of its kind in North America. Although there are other initiatives in Canada that provide grants and rebates for retrofits, Fawcett says the township’s program specifically targets embodied carbon — the emissions stored in construction and building materials.

“All the programs now, they go after the deep energy retrofits, they all go after operating carbon emissions and reducing homeownership costs by reducing your heating bills or reducing your electricity consumption,” said Fawcett.

The township’s program, on the other hand, goes after a building “from Day 1,” he said. By using low-carbon construction materials, builders can get a spectrum of rebates from the township depending on the evaluated level of emissions from the final build. If a building achieves net-zero emissions, 80 per cent of the building permit fee will be returned. It fits into the township's overall goal of achieving a 29 per cent reduction in its GHG emissions from the 2011 baseline by 2030, said Fawcett.

So far, two buildings have been built under the program, while five others are in the early stages of development. Although two may seem like a small number, Fawcett says it’s pretty significant for the township. The program kicked off at a tricky time, right as the pandemic forced businesses to close or redefine the way they operate.

The two projects completed so far are great examples of what’s possible, Fawcett says. In addition to the nursing station, one private residence has been built.

Chris Magwood of Builders for Climate Action, a coalition of builders, developers, policymakers and others focused on lowering carbon emissions from buildings, says there’s no single solution for cutting back on carbon in construction. Magwood, whose organization helped develop the township’s low-carbon construction program, says insulation is the leading source of building emissions, while cladding (the outside of a building) and concrete are two other main contributors.

Building material manufacturing for new homes in Canada accounts for up to 10 million tonnes of emissions, says Magwood. That’s why programs like Douro-Dummer’s — which he says could reduce building emissions by 75 per cent in the near future, and perhaps completely eliminate them by 2040 — are so important.

There’s a spectrum of costs associated with low-carbon building, but Magwood says there are usually enough low-cost options within a building plan to make it work.

“If you can save money on those big-ticket things, you can turn around and invest a bit more of those savings in some of the low-carbon options that maybe do cost a bit more,” he said.

The Camp Kawartha project was made possible through the program in the township, as well as community fundraising. The almost 7,000-person municipality is small, but mighty, says McGahern, who spent the past nine and a half months completing the new nursing station at the camp with straw bales from nearby Port Hope, natural plaster, non-toxic paint, and triple-pane window glass.

Having the township, a stone’s throw from his home in Peterborough, lead the way is a dream come true for Magwood, who has been working on research and action around sustainability in buildings over the past 25 years.

Larger municipalities, such as Toronto and Vancouver, are also taking a page from Douro-Dummer’s book; Magwood is working with the cities to create similar programs.

“It went from being really obscure to suddenly moving fast. It's been great to see,” Magwood said of the conversation around buildings and emissions.

“The climate emergency, people are taking it seriously and deciding that they need to move. And so it's been really exciting to be part of all that.”

what a fantastic photo of

what a fantastic photo of this trio. so enthusiastic and right minded. it makes me feel a bit hopeful in the face of the corporate political insanity called Busines As Usual. It reminds me of good old Katimavik. More proof that the kids are going to save us from ourselves if anything is saved in the end

"Cellulose insulation, a type of building material made from glucose" -- huh? This seems rather off. I expect it may be POSSIBLE to make cellulose from glucose, but why would anyone ever do it? Glucose is admittedly pretty cheap as foodstuffs go, but surely cellulose is still far cheaper.
Plus it's giving me Hansel and Gretel vibes; house made of candy and so forth.

Interesting article. Good to see innovation producing new possibilities.
A couple of questions come to mind concerning the product used.
1) What is the fire resistance of straw in this construction.
2) Straw will rot when wet, what protection is use to prevent this occurring.
3) Building style, size where this process can be utilized.

More information on the process used would go a long way to supporting this type of building.

I for one will look into it further.