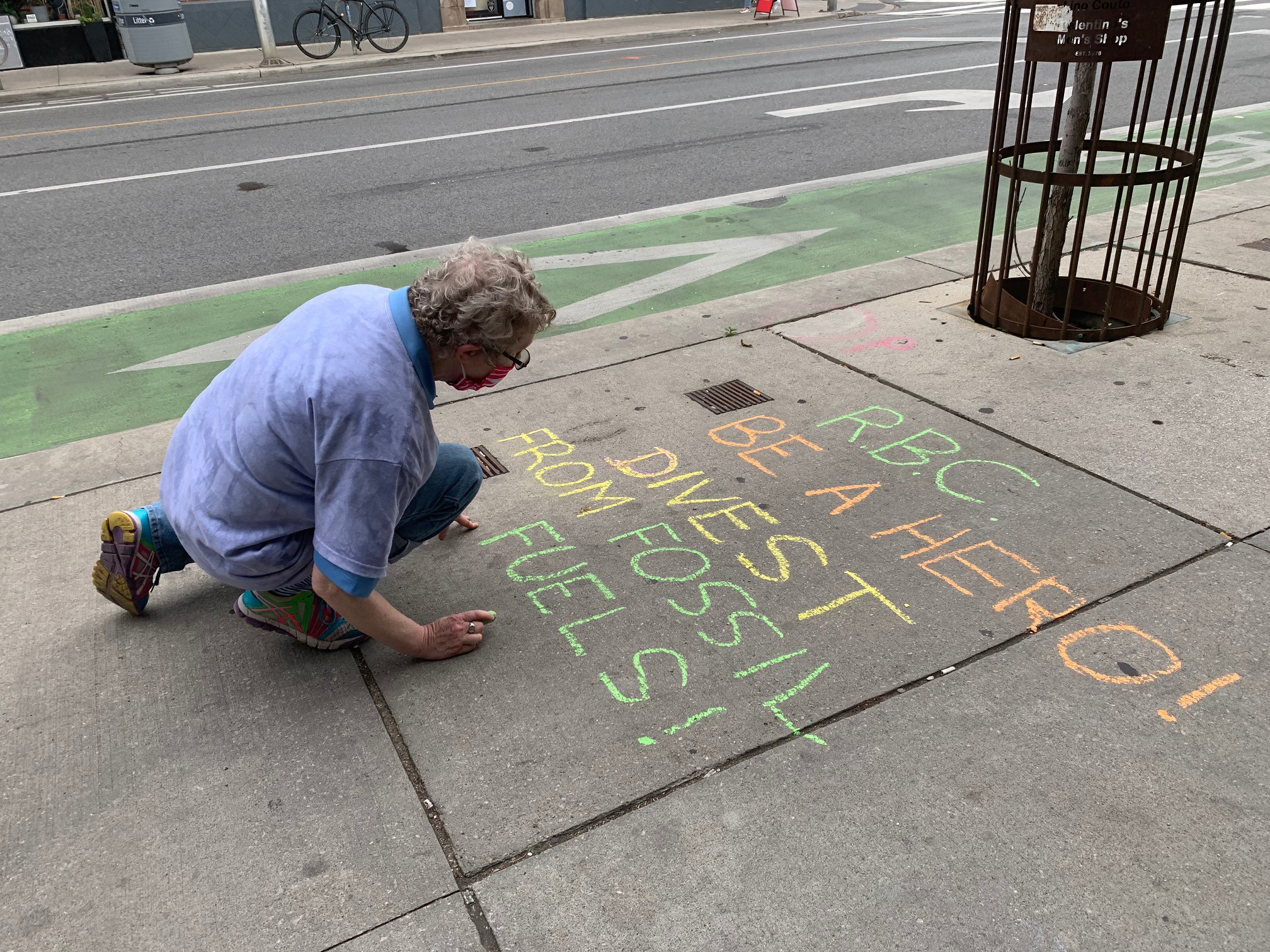 Canada’s biggest bank might have been caught off guard by the sudden onslaught of pressure from customers across the country this year, demanding it deliver on its commitments to climate action and social justice.

Despite its grand public statements of climate leadership and commitments to back projects that respect Indigenous rights, RBC has made headlines for investing billions of dollars in fossil fuels. It is not widely known, but RBC is now financing pipelines with massive Indigenous-led opposition, including the Coastal GasLink project on Wet'suwet'en territories, and Line 3 south of the border.

Customers across Canada are starting to challenge RBC’s greenwashing. During the first half of 2021, RBC has been the target of a public pressure campaign spanning from coast to coast — with customers, shareholders, and employees calling on the “worst fossil bank” in Canada to stop financing fossil fuels.

At the bank’s 2021 annual general meeting, an RBC shareholder presented the signed petition in support of a proposal to significantly reduce its financed emissions. The demands resulted in a historic shareholder vote of 32 per cent in favour of the climate proposal.

Then, at the inaugural People’s Annual General Meeting, convened by Leadnow and attended by hundreds of RBC customers and shareholders, participants learned about the true impacts of the bank’s behind-the-scenes fossil fuel financing. At the meeting, participants voted to launch a summer campaign at RBC branches across the country to educate customers and employees about its role in funding the climate crisis.

Already, over 300 volunteers signed up to “adopt a branch.” On June 8, organizers covered sidewalks outside more than 70 RBC branches with beautiful chalk drawings depicting a livable, climate-safe future — and encouraging RBC to be a part of it.

These actions aim to build awareness amongst RBC employees and customers, at their workplace or local branch, about the bank's continued contribution to fuelling the climate crisis — and mobilize them to take action. At least 40 branches have been “adopted” all over Canada, and hundreds of people are organizing “meet and treats,” leaflet drops, and meetings with their branch managers.

So far, RBC has stayed silent. But inaction is risky, as the threat of damaging its brand and losing customers continues to grow.

It’s all too clear that big banks like RBC are falling behind on climate action, when even fossil fuel companies are beginning to move away from oil and gas.

It’s all too clear that big banks like RBC are falling behind on climate action, when even fossil fuel companies are beginning to move away from oil and gas, writes @cherrytsoi. #DivestRBC #RBCRevealed

On May 26, deemed “Black Wednesday” for oil companies, courtrooms and boardrooms handed down clear orders to fossil giants Shell, ExxonMobil, and Chevron to urgently act on climate change.

A Dutch court ordered Shell to cut emissions by 45 per cent over the next 10 years, forcing the company to slash at least a million barrels of oil and gas from production every day. Exxon shareholders ousted two pro-oil board members and replaced them with candidates in favour of a green and just transition. And at Chevron, over 60 per cent of investors voted to pass a resolution forcing the company to reduce its carbon emissions.

Even the world’s most influential energy modelling organization, the International Energy Agency, decreed there is “no need for investment in new fossil fuel supply,” backing the long-sounding alarm from climate advocates and Indigenous leaders around the world to end fossil fuel funding.

These recent victories for the climate movement come from years of community organizing. Indigenous and front-line communities, university divestment campaigners, grassroots climate justice groups, scientists, and advocacy organizations have tirelessly fought for a green and just transition away from fossil fuels. Now, the movement has gone mainstream. From boardroom to break room, we’re infiltrating the ranks of our opponents.

If there is a lesson here, it is that the climate movement delivers results when we focus our efforts. And in Canada, fossil fuel opposition led by Indigenous land defenders, youth, customers, and shareholders are turning their attention to the biggest bank: RBC.

As record-breaking heat waves and extreme wildfire surge through Western Canada — claiming more than 700 lives and burning through communities — it’s long past time for the biggest financial institutions in the world to stop funding fossil fuels and worsening the climate crisis.

The tide is turning on the oil and gas industry. RBC is facing a choice: Step up to be a real leader in the transition to a green future or dig its heels into a fossil-fuelled past. Any delay in action will damage the responsible banking image RBC has worked so hard to build — and risk losing thousands of once-loyal customers.

Cherry Tsoi is a digital strategist and communicator focused on climate justice campaigns. She has led and won campaigns on a range of environmental and social issues, most recently at the independent citizens' advocacy organization Leadnow.

On issue after issue, RBC

On issue after issue, RBC prove to be horrible. Even compared with other major Canadian banks, who are far from a pleasant bunch, RBC manages to stand out. I don't really understand why anyone would remain a customer of RBC when there are alternatives.

We have options folks. Ditch

We have options folks. Ditch the banks and go to a credit union. Credit unions do everything banks do EXCEPT invest your money outside of your community and invest in dirty, destructive environmental resource extraction in Canada and around the world.