Apartments and condos are becoming too hot to live in. How can we fix them? 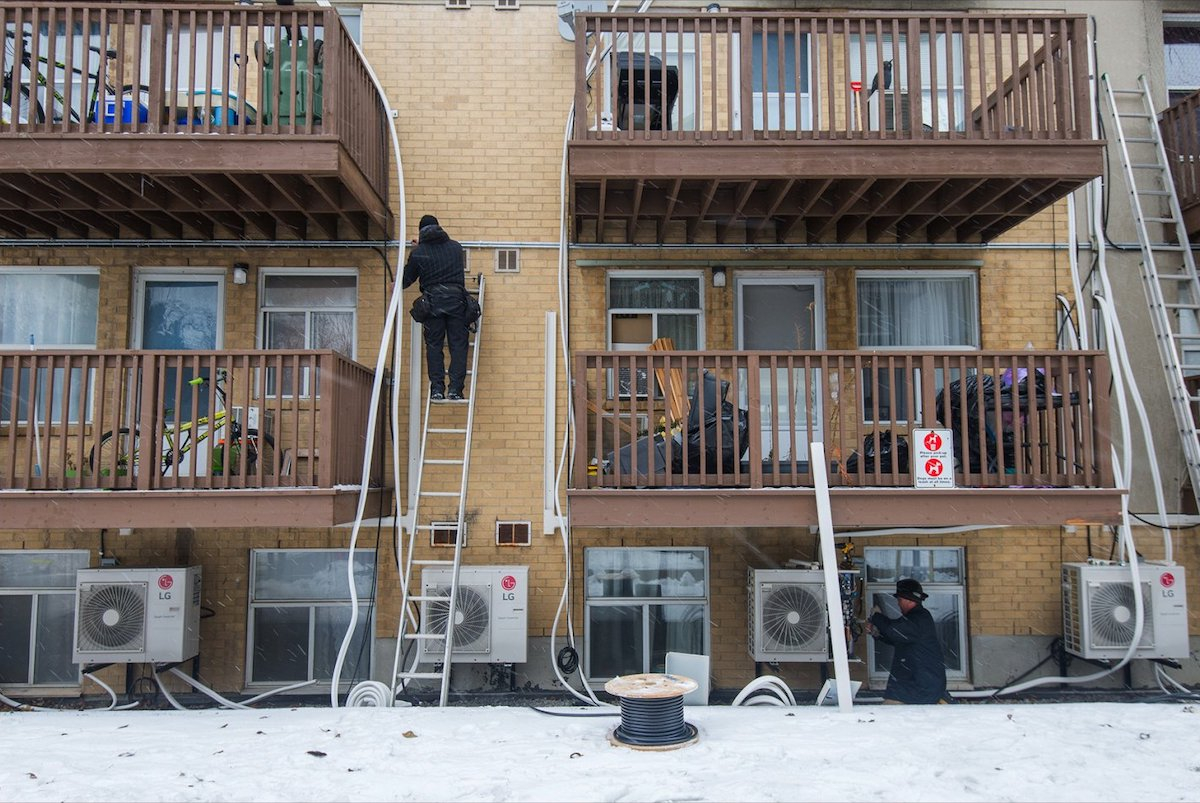 A building in Toronto getting heat pumps installed. Photo courtesy of the Atmospheric Fund
Previous story

Like many who suffered through the late June heat in British Columbia, Peter Cox didn’t sleep.

It was too hot in his Fairview condo, nestled in a leafy area of the city where Vancouver General Hospital and many other health buildings sit. His unit has sliding glass doors, poor ventilation and no AC unit. After a couple of 34 C nights with fans blowing warm air over his hot body (he had a thermometer in his room to keep track), he took refuge at a hotel with a cooling system.

Meanwhile, a stone’s throw from Cox’s building, Vancouver General Hospital was filled with people who weren’t so fortunate. The health system was crashing under the effects of record-breaking heat. More than 700 people died during the heat wave, ambulance wait times stretched on for hours, and doctors called on public health to do better.

It left Cox, along with people across B.C., rethinking the places they live and how much danger existing homes could pose if climate change makes heat waves the summer norm in Canada. Of those who died during the heat wave, it is presumed that many lived in homes without proper cooling mechanisms to keep them safe. Vancouver-area homes aren’t built for extreme weather of any kind. City planners have long known that, but the deadly heat dome intensified the scramble for individuals and cities to find solutions.

Rural residents also feel the heat, but not to the same degree as those in city centres. Vancouverites, Torontonians and Montrealers live in “urban heat islands,” formed when concrete and asphalt replace grass and dirt. Buildings and concrete absorb radiation and release it as heat, making cities up to 12 degrees hotter than their rural counterparts. Heat is also more intense in apartments and condos than houses, which usually allow cross breezes and have more shade.

Apartment buildings without air conditioning can be renovated to become less warm with retrofits, such as cooling shutters installed on exterior windows. And electric heat pumps, which act as heaters in the winter and air conditioners in the summer, can replace carbon-emitting furnaces and boilers that burn natural gas. Heat pumps vary in price, but can cost up to $10,000.

We know how to cool homes, and in turn save lives, but the question of who is responsible for making it happen remains. In Cox’s case, as a condo owner responsible for his own unit, he did some research on heat pumps. He asked a contractor to assess the exterior of his building and made plans to purchase one of his own. However, he got shut down by his strata over concerns about the integrity of the building’s rainscreening, as well as esthetics.

“Although the appliance in your unit may be able to be disguised, if there were several owners and renters that would want to follow suit, the appearance of the exterior of the building would be altered in an unattractive way,” reads an email from the strata.

Cox explains heat pump installations require a compressor, housed in a white box on the balcony, and one refrigerant line, which would be six to eight feet long, going up and into the wall, connecting the outdoor system to his indoor unit.

“For me, esthetic considerations should be so far down the list that it's ridiculous that it's even brought up,” said Cox, who runs a carpet recycling company.

Rural residents also feel the heat, but not to the same degree as city dwellers, who live in “urban heat islands,” formed when concrete and asphalt replace grass and dirt. Who's responsibility is it to update buildings to make them safer?

“The drilling through walls (would be) professionally done. It's not like it's DIY. I'm not going to Home Depot to rent a drill to do it myself.”

Condominium owners have hoops to jump through as they search for ways to adapt their homes to heat. However, renters like Christine Butler have even fewer options.

Like Cox, Butler was in a third floor walk-up during the heat wave. Her suite, covered in plants and books neatly arranged on a shelf in her living room, is nestled between two north-facing corner apartments — there’s not a breeze to be had.

Butler, who emphasizes she doesn’t want to point the finger specifically at her property company, says she doesn’t think her building will see upgrades like heat pumps or retrofits. It leaves the work-from-home counsellor, who lives in her suite with her five-year-old daughter and white German shepherd, wondering what’s next.

During the heat wave, Butler was lucky to have another place to go. After sweating it out for a night, her daughter waking up every hour from the discomfort, she went to her sister’s basement for the duration of the heat dome.

“I don't think building management in an old building like this would be able to invest in anything central. Whether they could be held responsible to do so, I’m not sure,” she said.

Sean Pander, manager of the City of Vancouver's Green Building Program, says the city is partnering with the province as well as Landlord BC on a program to help landlords install heat pumps in rental apartment buildings the city. There are also rebates available from the Province and City for homeowners looking to improve their homes with heat pumps and other energy-efficiency upgrades.

Although Pander says there are no rules in place to make landlords upgrade their buildings, they’re working on ways to encourage property owners to voluntarily make the fixes. He said they’re also talking to BC Housing about how non-market housing can be made more resilient to extreme weather.

Working to reduce carbon pollution is something Pander and his team are trying to do through buildings and, eventually, regulation that encourages people to take it upon themselves.

“Eventually, you're going to need to get to zero emissions, which means you can't burn fossil fuels and natural gas or heat anymore,” he said.

“And so by introducing those limits, we know it will start to increase demand and lower the price of these heat pump technologies.”

Eastern provinces have been working on similar programs since 2018, when a heat wave left 66 people dead in Montreal, said Bryan Purcell, vice-president of policy and programs at The Atmospheric Fund, a regional climate change agency based in Toronto. Ontario doesn’t collect heat-related death data in the same way, but the agency expects there were numerous deaths in the province, he noted.

The City of Toronto has a financing program where low-interest loans are granted for retrofits to rental apartment buildings that can be paid back through the property tax system — a good solution that offers tangible incentives to landlords, Purcell said.

“It's definitely not happening fast enough — either to address public health issues around extreme heat or just in terms of improving the buildings to achieve our climate targets,” he said.

“In Toronto alone, to get on track for climate targets, we need to be retrofitting 30,000 homes a year across the single-family and multi-family market each and every year and to a near-zero standard, and nothing even remotely close to that is happening presently.”

He expects Canada could see changes when it comes to rules and regulations around landlords ensuring their properties are resilient to weather — he says the City of Toronto is in talks about bylaw options that would require building owners to improve their structures for heat.

Also of note is Toronto city council’s approval of the Toronto Green Standard Version 4 as of July 14, which Purcell says will address new building performance, as well as encourage retrofits. Toronto now requires all city-owned buildings to be designed to net-zero emissions starting next year; the prior version made it so existing city buildings need to be retrofitted to net-zero emissions by 2040.

Since buildings are the largest source of carbon emissions in Toronto, Version 4 will have a significant impact on the climate, and, therefore, residents’ health, said Purcell. The new legislation aims to cut back on cumulative carbon emissions by around two million megatonnes by 2050.

In Montreal, where the city’s current plan aims to hit carbon-neutral by 2050, David Kaiser is leading a team of experts to prepare for the next heat wave.

As a preventive medicine specialist with the city’s public health department, he’s concerned with building design and other measures that could save lives. He says his team works on both short-term and long-term approaches that will, hopefully, help curb heat-related deaths.

That information feeds into a system the city is currently developing to identify and protect extremely vulnerable residents during the next heat wave.

Retrofitting buildings falls into the long-term, preventative-solution category, explains Kaiser. And although AC isn’t touted as a climate-friendly solution, he says more AC in homes across Canada would save lives.

According to Statistics Canada data, 53 per cent of households in Quebec have some form of air conditioning. Kaiser noted that half of Quebecers who actually have AC units are usually those who need it the least; people living in shady suburbs.

If all the air conditioners in leafy green suburbs were transferred to people living in highrises and small apartments in central neighborhoods, there would be an overall beneficial effect on health, Kaiser said.

People dying during heat waves is an equity problem, he added.

Seniors and young children have unique physiological differences that make them more vulnerable to extreme heat. For example, Health Canada notes older adults, on average, have “reduced thirst sensation,” and young children have greater surface area to body weight ratios that make them get hotter faster if the air temperature is above skin temperature. Both also have lower, on average, sweating capacity. In other words, effective public health strategies have to recognize that people quite literally experience heat differently.

Even in Canada, which is known as a cold country, climate change must be viewed as a public health emergency, said Yellowknife-based emergency room physician Dr. Courtney Howard, who is also with the Canadian Association of Physicians for the Environment (CAPE). Buildings, and how equipped they are for it, are part of the picture.

“We know from the Montreal heat wave from a couple of years ago (that) the death rate was actually double in the places that were defined as being an urban heat island, and so we need to be really watching out for elderly people, for people who are experiencing homelessness, for people who may have psychiatric pre-existing conditions that make it more difficult for them to process information, and to seek safe responses to that information,” she said.

“So those are the people we need to be caring for immediately, and whose situations we really need to be taking into account as we design our systems and our communities for the future.”

Wonderful city living what? Heat islands and high rise chimneys that carry the heat to the top of the stack? The only fix may be to build net 0, but this current 'economy' builds for appearance.

If its not on the surface where everyone can admire the architecture and those 'open concepts', who cares???? Until you're roasting yourself by lunchtime.

A miracle of short term planning........with a dollup of denialism thrown in....for sure.