There's a missing tool in our fight against climate change 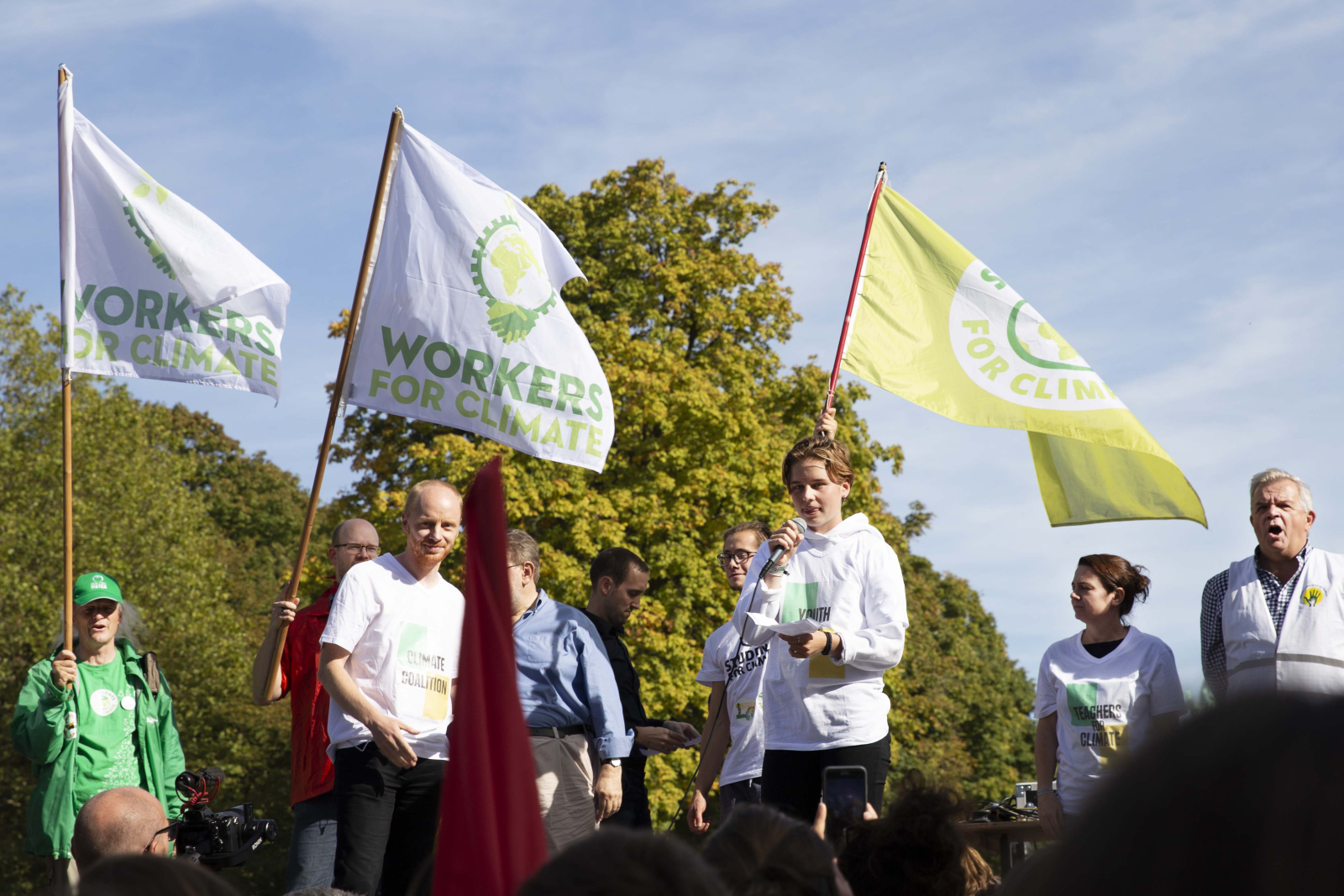 Countries are under pressure to get tougher on polluters. On July 14, the European Commission announced its proposed solution: the Carbon Border Adjustment Mechanism. Photo by Wikimedia Commons
Previous story

A tool you’ve probably never heard of may be the key to enabling Canada's climate ambition. It’s called border carbon adjustment, and it could change the way we pursue decarbonization.

Canada has been on a roll over the past year. The Liberal government introduced a legislated net-zero target, backed by a plan to increase the price of carbon to $170 per tonne by 2030. The Conservative Party responded with its strongest climate plan to date, designed to achieve Canada’s Paris Agreement targets. For the first time, every federal political party seems to be focused on serious emissions reductions.

It’s not just governments that are getting ambitious. Alongside their international peers, Canadian industry players have issued a rapid-fire succession of net-zero commitments. About 90 per cent of western oilsands production is now covered by a mid-century net-zero target, and sectors like steel, cement and mining are also proposing big emissions cuts. A steadily rising national carbon price offers a powerful incentive for Canadian firms to reduce their emissions.

The problem we now must confront — urgently — is that not every country is ambitious about cutting carbon pollution. Canadian firms are up against some international competitors that enjoy lower production costs because the countries where they operate aren’t prioritizing climate action. This means that pricing emissions in Canada could have the effect of shifting production to places where it’s cheaper to pollute — a phenomenon called “carbon leakage.” We need to plug this leak before it becomes a flood, both to protect our economy and ensure we reach our climate goals.

The European Union is a few steps ahead of Canada in tackling this challenge. On July 14, the European Commission announced its proposed solution: The Carbon Border Adjustment Mechanism. The new policy would apply charges for greenhouse gases emitted in the production of imported steel, iron, cement, fertilizers, aluminum and electricity. The good news for Canadian exporters is that the EU is proposing to subtract any carbon price already paid by foreign producers, meaning much less impact for countries — like ours — with strong carbon pricing regimes.

Other countries with big climate commitments are also moving in this direction. The U.K. and the U.S. have both said they want to implement border carbon adjustment (BCA). After their June summit, the G7 leaders announced in a joint communiqué that they would work together to address carbon leakage.

Last week’s move by the EU gives us a clearer picture of the choices Canada will have to make as we get increasingly serious about climate action and start reckoning with the emissions embedded in our imports. Canada’s ambitious timetable for carbon pricing makes this even more urgent.

The sooner we ramp up our efforts, the better, because the details of BCA are complicated, and the potential pitfalls are many. How do we determine how much carbon was used to produce the goods we import? How do we mirror our complex domestic greenhouse gas regulations with a regime that applies at the border? Do we give foreign producers any credit if their home country has some form of carbon pricing? Do we provide any relief for Canadian exporters and, if so, how do we do it without violating World Trade Organization rules?

These are some of the top-line questions we’re going to need to address — there are many more. We can’t be daunted by them. Encouragingly, Canada is going into this process with a big advantage: our ambitious carbon pricing system. Not only is carbon pricing helping us to cost-effectively decarbonize our economy, but as we saw in the leaked draft of the EU’s proposal, it offers the best hope of reducing the impact of foreign BCA on our exporters.

Our new report has shown us that BCA is a complicated tool to get right, it’s challenging to square with the spirit of multilateralism, and even at its best it is not a perfect or complete solution. To be effective, it must be accompanied by other policies to boost the competitiveness of our industries as they decarbonize and to ensure markets for their green products. For all BCA’s challenges, though, it’s hard to see how we could successfully decarbonize without it.

Canadian leaders need to start designing our BCA system now — beginning with close consultation with affected industries — to keep our economy competitive and our climate ambition on track.

Michael Bernstein is the executive director of Clean Prosperity.

Aaron Cosbey is a development economist with 30 years’ experience in the law and economics of sustainable development.

"For the first time, every

"For the first time, every federal political party seems to be focused on serious emissions reductions. It’s not just governments that are getting ambitious. Alongside their international peers, Canadian industry players have issued a rapid-fire succession of net-zero commitments."

Don't believe everything politicians and Big Oil CEOs say.
Canada is not on track to meet 2030 and 2050 targets.
The OECD, the UN, and the federal Environment Commissioner warn that Canada is NOT on track to meet its targets. The main stumbling block? Increasing oilsands emissions.
This is the same Liberal Govt that declared a climate emergency one day and approved the TMX pipeline expansion the next.
Trudeau: "No country would find 173 billion barrels of oil in the ground and just leave them there."
Under climate leader Trudeau, Canada's GHG emissions in 2018 hit levels not seen in a decade.
Oilsands emissions do nothing but climb year after year.
Oilsands expansion enabled by new export pipelines will prevent Canada from meeting its inadequate targets for decades.
Govt and industry repeatedly set distant targets that they have no intention of meeting.
The Liberals' climate plan is to "green" fossil fuels, not get off them.
Trudeau & Co. are following Big Oil's playbook: delay, delay, delay.
A plan to fail.

- Increase fossil fuel production.
- Purchase of the existing Trans Mtn pipeline.
- Promotion and construction of the Trans Mtn Expansion Project.
- Expand markets.
- Greenlight new LNG projects.
- Ramp up fossil-fuel subsidies.
- Stick taxpayers with clean-up bills, even for multi-billion dollar oil companies (e.g., CNRL).
- Grossly under-report oil & gas emissions.
- Creative accounting to wipe emissions from the balance sheet.
- Dubious carbon offsets.
- Aspirational net-zero targets decades out into the future (2050) with no roadmap to meet them.
- Planned billion dollar investments in costly, inefficient, unviable, unproven, or non-existent technologies like carbon capture and SMRs (for oilsands industry).
- Accountability legislation without real teeth.
*
"…So, why wouldn’t the Liberals agree to a 2025 milestone or true accountability? The answer seems clear from the deep analysis the group Seniors for Climate Action Now (SCAN) conducted on the Liberal climate plan announced last December: The Liberals have little intention of cutting GHGs by 50% this decade.
"Their focus is not on replacing fossil fuels with renewables, but rather on increasing fossil-fuel extraction to make 'blue' (mostly from fracked gas) hydrogen, invest heavily in costly, unproven and risky small nuclear reactors, while ramping up very costly, ineffective carbon capture to bury emissions. Tar/oilsands companies are now requesting a $50-billion taxpayer subsidy to decarbonize. Each of these initiatives is fraught with problems, will distract from the required urgent action, and divert tax dollars away from renewables. The SCAN assessment is captured in the 50-page report’s title, 'The Liberal Climate Action Formula: A Recipe for Failure.'"
"Let’s not kid ourselves: Liberals' net-zero bill is image over substance again" (National Observer, July 13th 2021)

IF Canada was actually the

IF Canada was actually the climate leader that all the spin the article cites at the beginning suggests, THEN it would be worth having what amounts to carbon tariffs. But we're not, and until we are they'd be kind of irrelevant.