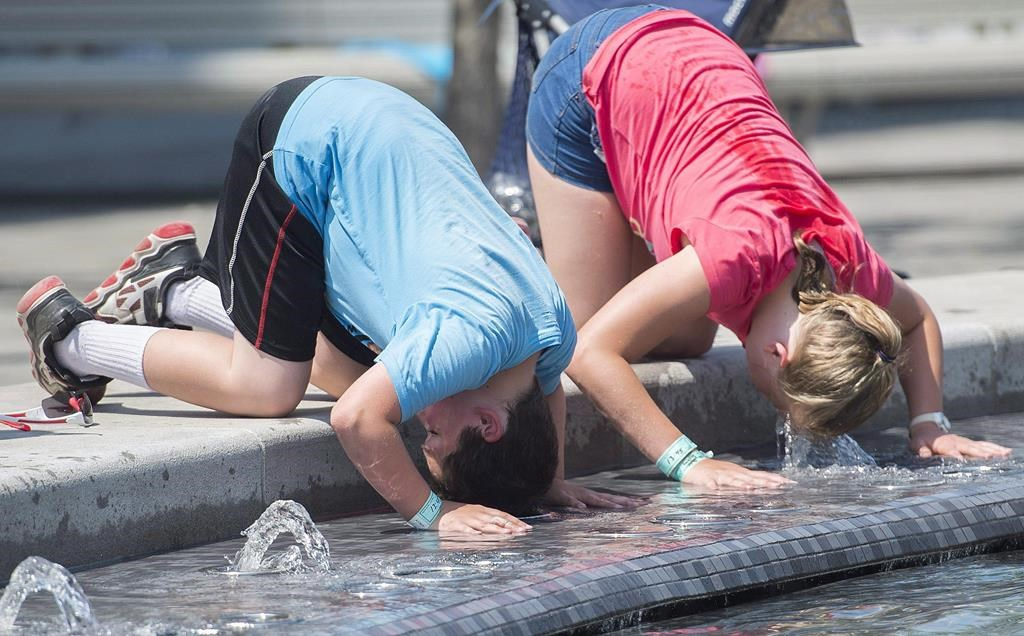 Children dunk their heads in a water fountain during a heat wave in Montreal in July 2018. Photo by Graham Hughes / The Canadian Press
Previous story
Next story

MONTREAL — Researchers in Quebec have developed a new warning system for heat waves that they say is more precise and better adapted to climate change.

Quebec has had a heat-alert system in effect since 2010, but researchers are modifying it because they expect periods of extreme heat will extend beyond the summer months in the future.

The new alert system, which will be tested soon, is designed to help public health officials avoid deaths and hospitalizations as extreme heat waves become more frequent and more severe.

Under the existing system, alerts are typically triggered when a threshold temperature is forecast to be hit over several days. They allow health officials to inform the public, but also to manage hospital staffing and beds and make other decisions, such as extending the hours of public swimming pools and air-conditioned libraries and shopping centres.

Currently, the temperature that triggers an alert is the same throughout the year. Under the new system, designed by researchers from the province's scientific research institute and its public health institute, the threshold temperature will vary depending on the season. It will also be in effect for an extra two months, from April through October.

Fateh Chebana, a professor at the scientific research institute, known as the INRS, participated in the design of the original system. He said the problem is that a 32 C day in April doesn't have the same impact as in July, when people are accustomed to hotter weather.

“When the seasons change, that's where there can be problems,” he said. “People don't expect it.” The new system takes that into account: For example, the threshold to trigger a warning in April is 23 C versus 32 C in July.

While most people might find a 23 C day in April pleasant, an extended period of hotter weather could pose a problem for vulnerable populations, such as the elderly or those with respiratory problems like asthma. And in the past, there have been deaths in April associated with heat, Chebana said.

The temperature thresholds were determined based on data from hospitalizations and heat deaths.

The current system is in effect from May 15 to Sept. 30 in Quebec. But this year, some April days saw the temperature climb above 24 C in Montreal when the average temperature is just 12 C. In May, southern Quebec saw temperatures of 30 C on three consecutive days.

Quebec has had a heat-alert system in effect since 2010, but researchers are modifying it for climate change because they expect periods of extreme heat will extend beyond the summer months in the future. #ClimateCrisis #ExtremeHeat

The system was developed with Montreal-specific data, but will be adapted for other Quebec regions. And the methodology can be applied to other Canadian provinces and even to other northern countries, Chebana said.

Environment Canada also has a heat alert system, but it is “general,” Chebana said, because it is applied to different uses — transportation, tourism, outdoor workers — and isn't health specific.

Different countries have created heat warning systems after the European heat wave of August 2003, which killed tens of thousands of people, Chebana said. In Quebec, a heat wave in 2018 caused 66 deaths in the Montreal area, according to the city's public health department.

The results of the researchers' work on the alert system will be published in the scientific journal BMC Public Health.