What is fuelling Russia's mega fires? 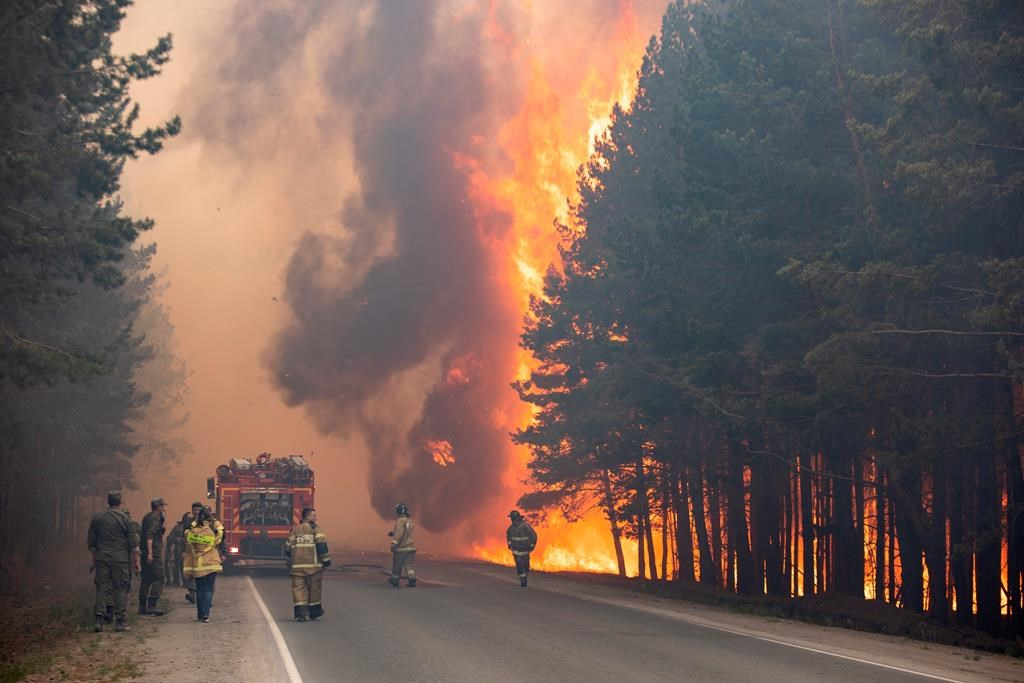 In this Wednesday, June 16, 2021 file photo, firefighters work at the scene of forest fire near Andreyevsky village outside Tyumen, western Siberia, Russia. File photo by The Associated Press/Maksim Slutsky
Previous story
Next story

Northeastern Siberia has experienced particularly massive fires this summer amid record-setting heat. Many other regions across the vast country also have battled wildfires.

These are some of the factors behind Russia's endemic wildfires and their consequences.

In recent years, Russia has registered high temperatures that many scientists regard as a clear result of climate change. The hot weather has caused permafrost to melt and fueled a growing number of fires.

The vast Sakha-Yakutia region of Siberia has seen record temperatures this year during a long spell of hot weather. Fires there so far have scorched more than 1.5 million hectares (3.7 million acres) of land, making it the worst-affected region in Russia.

The fires have shrouded Yakutia’s cities, towns and villages in thick smoke, forcing authorities to briefly suspend all flights at the regional capital’s airport. The Russian Defense Ministry deployed its transport planes and helicopters to help douse the flames.

Fedot Tumusov, a member of the Russian parliament who represents the region, called the blazes “unprecedented.”

In 2007, a federal aviation network that kept a look out was disbanded and had its assets turned over to regional authorities. The much-criticized change resulted in the program's rapid deterioration.

Years later, the Russian government has reversed the move and recreated the federal agency in charge of monitoring forests from the air. However, its resources remain limited, making it hard to survey the far-reaching forestland of Siberia and Russia's Far East.

Often it's just a cigarette butt or an abandoned campfire, but there are also other causes.

Authorities regularly conduct controlled burns, setting a fire to clear the way for new vegetation and to deprive unplanned wildfires of fuel. But observers say that such intentional burns are often poorly managed and sometimes trigger massive wildfires instead of helping contain them.

Farmers across Russia also use the same technique to burn grass and small trees because of regulations that impose fines for having them on agricultural lands. Such burns regularly spin out of control.

Activists and experts say that fires are often set deliberately to cover up evidence of illegal lumbering or to create new places for timber harvesting under the false pretext of clearing burned areas.

Activists in Siberia and the Far East have charged that the bulk of such arsons are linked to companies that sell timber to a colossal Chinese market and called for a total ban on timber exports to China.

Officials have acknowledged the problem and vowed to tighten oversight, but Russia's far-flung territory allows the illegal activity to continue.

Russian law allows authorities to let wildfires burn in certain areas if the potential damage is considered not worth the costs of containing the fires.

Critics have long assailed the provision, arguing that it encourages inaction by authorities and slows firefighting efforts so a blaze that could have been extinguished at a relatively small cost is often allowed to burn uncontrolled.

“They eventually have to extinguish it anyway, but the damage and the costs are incomparable,” said Mikhail Kreindlin of Greenpeace Russia.

Wildfires don't just destroy trees; they also kill wildlife and can have consequences for human health by polluting the air.

Carbon emissions from fires and the destruction of forests, which are a major source of oxygen, eventually contribute to global warming and its potentially catastrophic impacts for the planet.

This year's fires in Siberia have already emitted more carbon than the fires in some previous years, according to Mark Parrington, a senior scientist at the European Centre for Medium-Range Weather Forecasts.

Parrington said the peat fires that are common in Siberia and many other regions of Russia are particularly harmful in terms of emissions because peat has been absorbing carbon for tens of thousands of years.

"Then it’s releasing all that carbon back into the atmosphere,” he said.

While pledging adherence to the Paris agreement on climate change, Russian officials often underline the key role played by Russian forests in slowing down global warming. However, regular wildfires have the opposite effect, dramatically boosting carbon emissions.

“They emphasize that huge areas are covered by forests but neglect the effect of greenhouse gas emissions resulting from fires,” Greenpeace's Kreindlin said.

By Bill Graveland | News, Politics | July 21st 2021
Reports from the Race to a Safer World