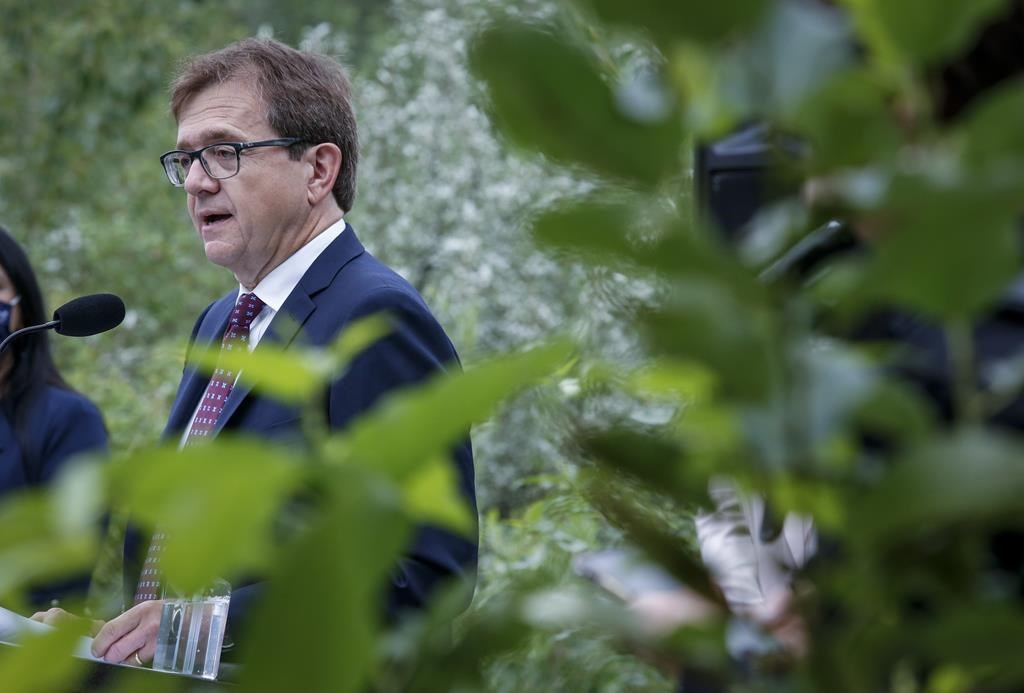 Canada's environment minister says extreme weather conditions across the country should be a wake-up call for people resisting taking action against climate change.

Wildfires are raging out of control, forcing residents out of their homes, in British Columbia, Saskatchewan and Manitoba.

A state of emergency goes into effect in B.C. on Wednesday to prepare for potential mass evacuations as nearly 300 fires burned across that province and threatened communities. Two people died in the village of Lytton, B.C., earlier this month after much of the community was destroyed by fire.

Farmers in the Prairies are also suffering from severe drought conditions, while weather alerts are in effect across Western Canada due to a dense cloud of smoke.

"I think the events that we're seeing this summer are probably underlying that even more for Canadians," Environment Minister Jonathan Wilkinson said Tuesday in an interview with The Canadian Press.

"The tragic event in Lytton, I think, was quite shocking for many people ... certainly the forest fires, but also the flooding that we've seen in the last number of years."

Wilkinson was in Calgary to announce a mitigation plan related to the 2013 floods in southern Alberta that led to five deaths and billions of dollars in damage.

He said all of the data suggests the extreme weather won't be improving in the future.

"I think people are starting to understand that it's even more proximate to them, that the impacts of climate change are with us already," he said.

"We need to take action to make sure we're not making the problem worse but, of course, we're also going to need to learn to adapt to the changes that are with us already."

Wilkinson, who grew up in Saskatchewan and now serves as the MP for North Vancouver, said he understands why some people still fight against taking action on climate change.

He said, however, that it's a reality that extreme weather events will be more frequent and more intense in the future.

Wilkinson said the time to take action is now.

"I think it's an opportunity to come together as Canadians and to double down in terms of being part of what has to be an international consensus and international solution," he said.

"I think it is the defining issue of our generation and certainly of our children, and I think that Canada has an opportunity to play an important role."

"Canada's environment minister says extreme weather conditions across the country should be a wake-up call for people resisting taking action against climate change."
Does that include Wilkinson's Liberal government?

"We need to take action to make sure we're not making the problem worse…"
Hence, new oilsands export pipelines, LNG projects, endless fossil fuel subsidies, support for carbon capture and SMRs. Accountability legislation without real teeth.
Trudeau: "No country would find 173 billion barrels of oil in the ground and just leave them there."

How did Federal Environment Minister Jonathan Wilkinson say all this with a straight face?