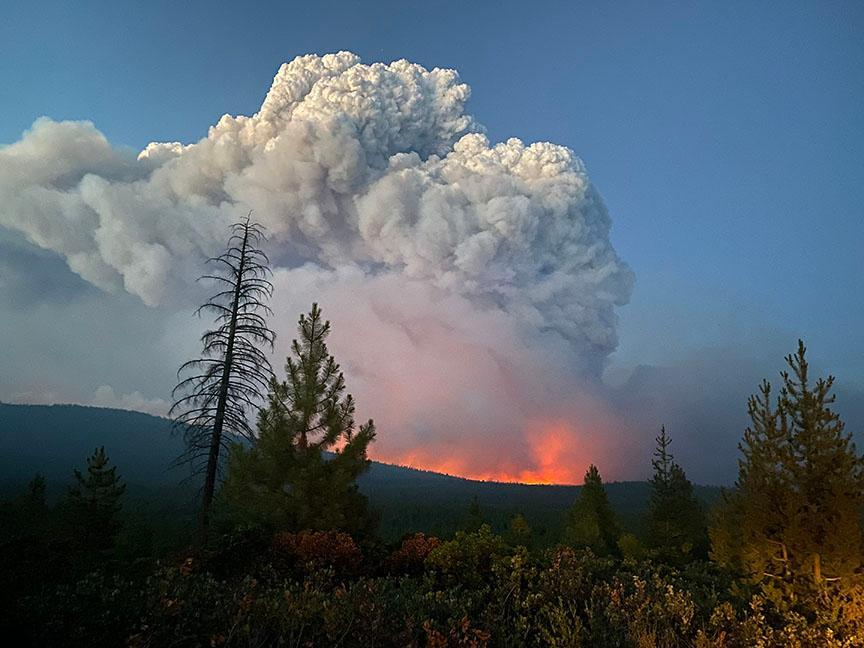 A huge column of smoke from the Bootleg Fire could be seen for miles. Photo by National Interagency Fire Center/Flickr
Previous story
Next story

Oregon’s explosive summer of wildfire is threatening to escalate further, with thunderstorms and lightning set to spur more of the blazes that have torn through much of a parched, dangerously hot U.S. west this year.

“It’s shaping up to be another difficult wildfire season. And the weather conditions — windy and dry with lightning — are problematic,” said Kate Brown, Oregon’s governor, on Twitter Tuesday morning, noting that last year — when the state saw one of its most destructive fire seasons on record — proved no corner of the state is immune. “Unfortunately, we’re responding to new fires as we continue to recover from last year’s devastating fire season.

“We must be prepared. Each and every one of us,” she added, urging residents to have a plan in place.

More than 80 major wildfires currently pockmark western states, covering a combined area similar to that of the state of Delaware, with the largest a conflagration known as the Bootleg Fire, a 537-square-mile blaze burning in tracts of old-growth forest about 300 miles southwest of Portland, Ore.

California’s Dixie Fire exploded in size to roughly 94 square miles (243 square kilometres) on Tuesday, with just 15 per cent containment. The fire erupted on July 13, close to where the deadly Camp Fire burned in 2018, and is also believed to have been caused by faulty Pacific Gas & Electric equipment. Officials report that more than 800 structures remain under threat from the fire, which has begun generating its own dangerous weather conditions.

An enormous pyro-cloud — formed when hot smoke and atmospheric moisture meet — ballooned out of the flames on Monday and emitted lightning over the fire footprint, adding to the risk of new ignitions and complicating containment efforts.

#Dixie wildfire was producing some
pyro cumulonimbus this afternoon within the plume of smoke from between 3:30 pm to present. Currently 4:30 pm. #Cawx pic.twitter.com/ytXYS2eixS

A pyrocumulonimbus cloud was also spotted above the Tamarack Fire, another fast-moving California blaze, which has burned close to 62.5 square miles (162 square kilometres) near the California-Nevada border and is at zero per cent containment.

Scientists say the human-caused climate crisis is fuelling the fires by contributing to scorching temperatures and dry, flammable vegetation. Almost all of the U.S. West is in the grip of a severe drought that has sent reservoirs plunging, including those used to fight fires.

“It’s shaping up to be another difficult wildfire season. And the weather conditions — windy and dry with lightning — are problematic,” said Kate Brown, Oregon’s governor, on Twitter Tuesday morning. #ExtremeWeather #Wildfire

A recent “heat dome” that settled over the Pacific Northwest, triggering record heat in Seattle and Portland that buckled roads, melted power cables and resulted in hundreds of deaths, would have been “virtually impossible” without global heating, according to a subsequent scientific analysis.

“The climate change connection here is crystal clear — the fires are tied to the very dry and hot conditions that have presided for a month now,” said Michael Mann, a climate scientist at Penn State University.

“This is dangerous climate change. It’s not two decades from now, or a decade from now. For the residents of Oregon, it’s here and now.”

The situation may worsen for firefighters struggling to contain the Bootleg Fire, with lightning forecast to strike and potentially ignite woodland near the Fremont-Winema national forest, where the blaze is currently raging.

“Although the lightning activity predicted for early this week is expected to occur east of us, we are prepared for the worst, and hoping for the best,” said Mike McCann, an assistant fire chief for the forest.

The Bootleg Fire, now roughly the size of Los Angeles, is so large and hot it is creating its own weather system, causing winds that have pushed burning embers on to trees and further spreading the flames. The fire has been burning for two weeks and barely a third of its perimeter has been contained by fire crews.

At least 2,000 homes have been evacuated due to the advance of the fire, with several hundred buildings already turned to ash. Winds are pushing the fire into more remote areas to the north and east.

If the fire were in densely populated parts of California, “it would have destroyed thousands of homes by now,” said James Johnston, a researcher with Oregon State University’s College of Forestry who studies historical wildfires.

“But it is burning in one of the more remote areas of the lower 48 states.”

The smoke created by the Bootleg Fire, however, has billowed into Canada, while smoke from other fires across the U.S. West has raised alarm over air quality in several cities.

On Tuesday, state officials in New York warned vulnerable people to stay indoors due to sooty air pollution from the wildfires that has wafted across the U.S. to the East Coast. The smoke caused residents of New York City, 2,000 miles away from the blazes, to witness a fiery sunrise on Tuesday.

Last year set a record for the amount of land consumed by wildfire in the U.S. West, but some experts predict 2021 will surpass this mark given that the peak fire months of late summer and early autumn are yet to come.