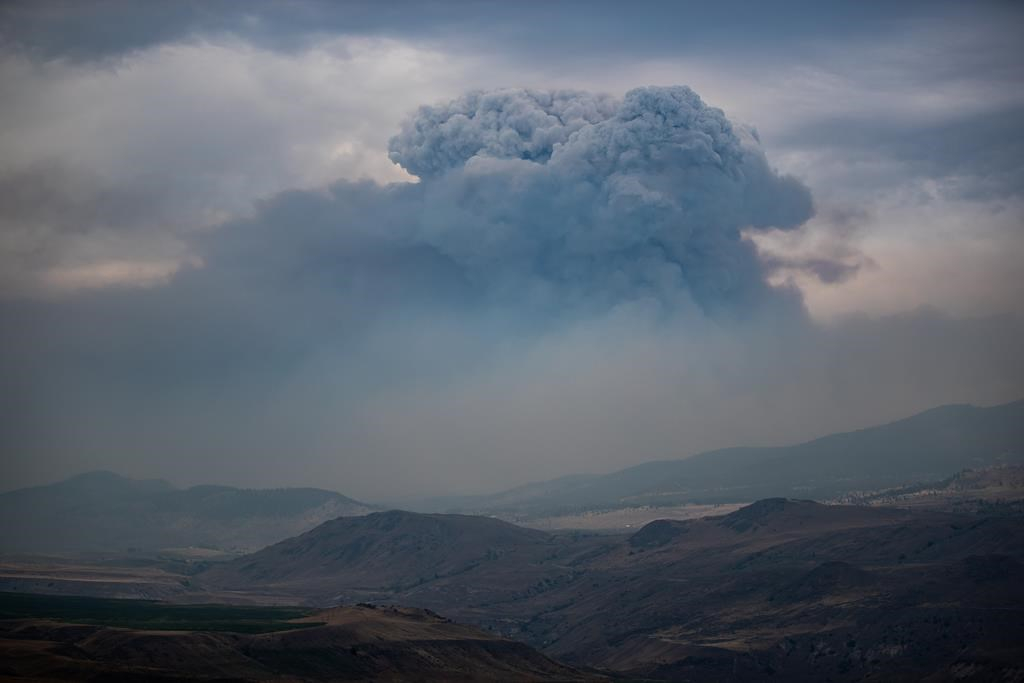 A pyrocumulus cloud, also known as a fire cloud, forms in the sky as the Tremont Creek wildfire burns on the mountains above Ashcroft, B.C., on Friday, July 16, 2021. File photo by The Canadian Press/Darryl Dyck
Previous story
Next story

British Columbia's public safety minister heaped praise on 100 firefighters from Mexico who arrived in the province Saturday to work "shoulder to shoulder" with local crews battling hundreds of wildfires.

Mike Farnworth personally welcomed the firefighters when their plane arrived in Abbotsford, telling reporters that he "cannot thank these men and women enough for answering our call for support."

"The crews here from Mexico are top-rate, incredibly skilled at the job they're going to do and we are so very, very pleased," Farnworth said, noting the firefighters will be in B.C. for 30 days.

"We cannot thank the Mexican government enough for assisting us."

Farnworth said the firefighters would immediately undergo rapid COVID-19 testing, and then meet with B.C. wildfire officials before being sent to work.

The BC Wildfire Service said there were 258 wildfires burning in the province on Saturday, which is down from 275 fires reported in its last update Friday, and down from about 300 earlier in the week.

But Farnwoth warned the province continues to see "difficult fire behaviour and conditions throughout the central and southern Interior," and that "challenging weather is forecast for the foreseeable future."

There are nearly 60 evacuation orders in place in B.C., affecting nearly 5,000 properties. There are 3,320 firefighters and other personnel working to fight the blazes, including 94 from out of province.

Further south, the Regional District of Okanagan-Similkameen said the Osoyoos Indian Band also rescinded an evacuation order for a handful of properties that had been threatened by the Nk'Mip Creek wildfire. But later in the day, the Regional District of Kootenay Boundary issued an evacuation order for an additional 126 properties threatened by the same blaze.

While some fires are being put out, fire information officer Forrest Tower said that doesn't necessarily mean residents can return home.

"Even though you may be looking at satellite imagery and not seeing any hot spots, there is still a lot of activity going on in that area, and once the wildfire has been moved from that area, it still isn't safe," Tower said.

He said crews are working with heavy machinery and ensuring roadways are safe to travel, so evacuation orders must still be followed.

A Canadian Armed Forces contingent is also in the north Okanagan before being deployed to various fires, and Farnworth said more military help will arrive in the coming week.

"We will see the other side of this fire season, but we need to continue to work together to take care and to stay safe," Farnworth said.

This report by The Canadian Press was first published July 24, 2021.

B.C. is in a state of climate emergency with no emergency plan