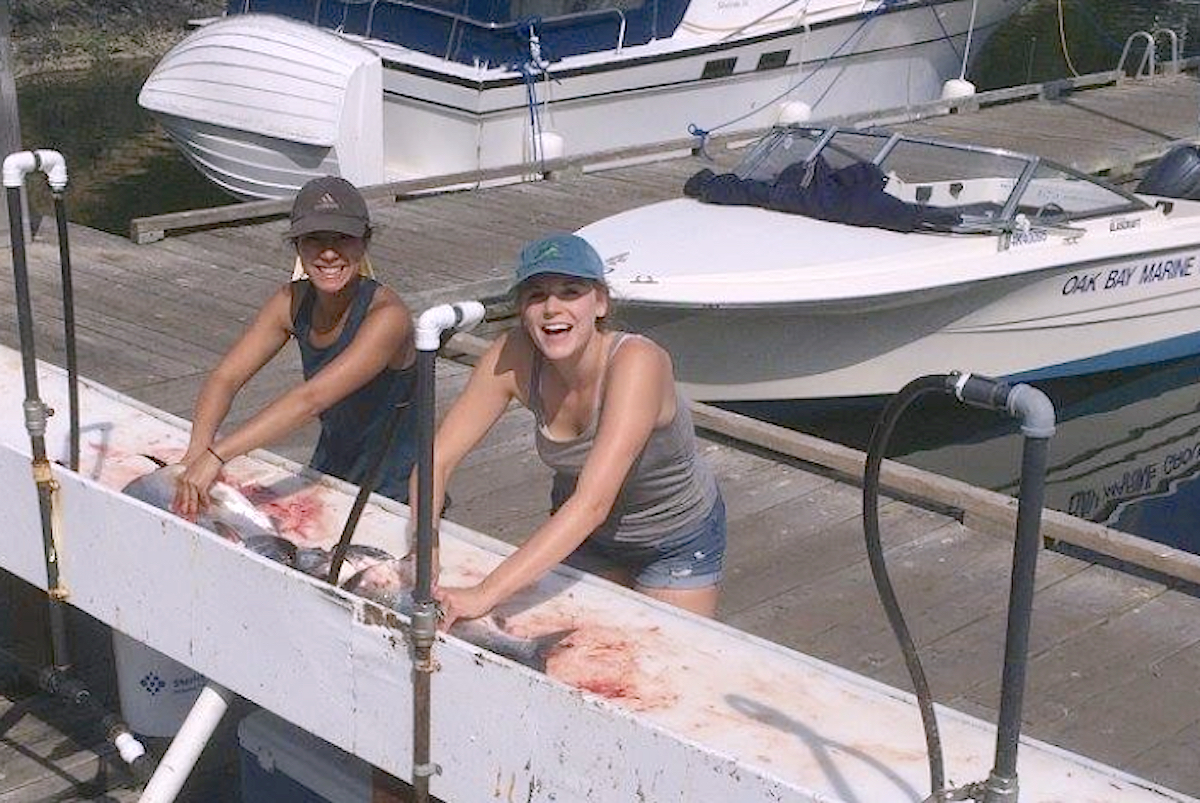 Squeezing out stomachs and poking through intestines seems like distasteful and ignoble work, but it’s part of a wider collaborative effort by researchers and recreational fishermen to save endangered salmon and divine changes to the marine food web as climate change advances.

Fisheries ecology and conservation researchers at the University of Victoria have recruited anglers as citizen scientists since 2017 to help determine what chinook and coho salmon are eating, Quindazzi said.

In turn, that data will help determine how the ocean ecosystem is shifting as water warms over coming decades and how best to preserve salmon — a keystone species on the West Coast — and the resources they depend on.

More than 150 fishermen and a number of fishing lodges have collected and dropped off the digestive tracts of more than 2,000 fish for the Adult Salmon Diet Program to date, Quindazzi said.

Often tossed overboard as gunky waste or used as crab bait, fish guts can yield a wealth of information around an individual salmon species, regional and seasonal facets of the food web and the changing state of ocean ecosystems over time.

“I personally went through around 600 of those stomachs myself, and it’s not the most glorious process on the surface of it,” Quindazzi said.

“But once you actually look at what’s going on in the stomach, I can see the information laid out in front of me.”

What do fish guts tell us?

Analysis of the chinook and coho stomachs reveal three forage fish are the foundation of their diet: Pacific herring, northern anchovy and the Pacific sand lance, commonly known as needlefish.

Squeezing out fish stomachs and poking through intestines may be distasteful, but it’s part of a collaborative effort by researchers and recreational fishermen to save endangered #salmon and divine climate-fuelled shifts to the marine food web.

Herring — historically abundant in B.C. waters but now under stress from changing ocean conditions — are far and away the most important prey for chinook and coho, the study has found.

But some interesting seasonal and regional variations have surfaced, Quindazzi said.

Northern anchovy, recently returned to the Strait of Georgia after a long absence, have become important summer food for the salmon in southern waters around Howe Sound, the Lower Mainland and the lower Sunshine Coast. Yet the little fish are appear totally absent in diets elsewhere.

Spawning anchovy benefit from warmer waters, and B.C. is the northern end of its geographic reach. But as waters continue to warm in the Salish Sea, the fish may become more abundant and lead to a shift in the food web.

It’s astounding how many sand lance a salmon can stomach, Quindazzi said, adding the record so far is almost 450 needlefish found in a chinook caught in north of Haida Gwaii in 2019.

Another surprise is the diet study indicates that rather than migrating away after spawning in the spring as previously assumed, many adult herring stay resident in the Salish Sea, providing key food for salmon in the spring and fall.

So further study about why and where the resident herring remain can help manage fisheries and this important food source for salmon, Quindazzi said.

They are often curious about the diets of fish, and knowing what salmon are chasing also helps them select the best lures, he said.

Plus the large number of recreational fishers who spend a lot of time on the water in a wide range of places can gather stomach samples far better than a small research team could, Quindazzi said.

Participating anglers remove, bag and freeze the digestive tract of their catch, recording some key details on an accompanying card and dropping them off at regional depots for pickup.

The program is always on the hunt for more sports fishers to participate, especially during the winter months when fewer people are out on the water, Quindazzi said.

But a reciprocal relationship between the fishers and researchers is a key goal of the project, he said, adding recreational fishermen aren’t privy for the most part to the science that government uses to make management decisions about the fishery.

“By conducting this citizen science project, we provide (fishermen) not only a means to see the data but to have meaningful input in how the project operates,” he said.

Jeremy Maynard, a certified fishing guide who resides in Campbell River, provides salmon stomachs whenever he can.

In terms of conservation, there’s a huge data gap around what happens when salmon leave the rivers and head out to the ocean, he said.

And Fisheries and Oceans Canada enacts restrictions on the recreational fishery regardless, said Maynard, also a member of the federal government's sport fishing advisory board.

“I’ve been in so many meetings where the discussion (on fisheries management) is compromised because you don't have data,” he said.

The salmon diet study, and other programs like the avid angler program, provide critical catch and genetic stock information as well as holistic data on the health of forage fish populations and marine ecosystem health, he added.

But aside from conservation and management of the fishery, Maynard — who has been plying the waters since the '70s — is just fascinated by salmon and what he can learn about them.

“I guess the bottom line is I'm just curious about all things fish.”

Should DFO rein in sport fishing to help save salmon?