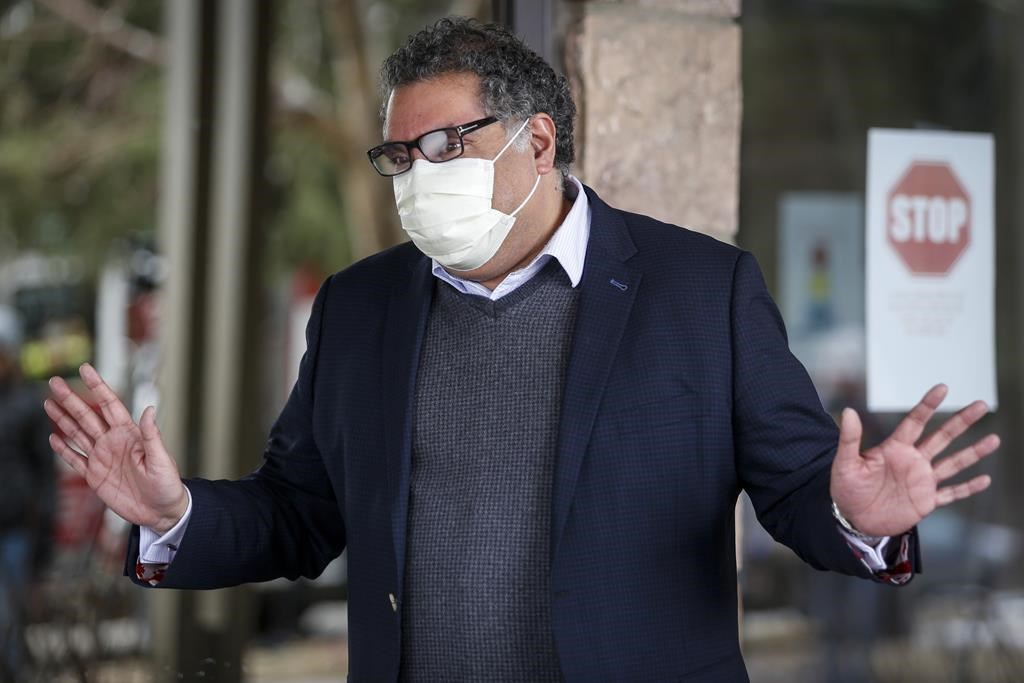 CALGARY — Alberta's health minister says it was the idea of the province's chief medical health officer to end isolation requirements for those who test positive for COVID-19 or who have been in close contact with someone who has.

Tyler Shandro said Dr. Deena Hinshaw came to the government with the plan. He said the government agreed with science and data supporting it and wanted to respect the independence of her position.

“It came from Dr. Hinshaw,” Shandro said Thursday when asked about the province's strategy. “This is work that was developed by those who are in public health."

He acknowledged concerns about moving forward so quickly. “We have many different opinions in the medical community and that’s to be expected and that’s encouraged.”

He also said that while Alberta is alone in Canada in the approach, others will eventually follow suit.

"We are leading the way in moving to the endemic (phase of the COVID-19) response. We've led the way throughout in the response to the pandemic quite frankly."

Hinshaw has always said she presents scientific evidence, numbers and trends, but the final decision on how to respond to pandemic developments lies with the government.

Close contacts of positive cases are no longer notified of exposure by contact tracers, nor are they required to isolate. The government has also ended asymptomatic testing.

As of Aug. 16, individuals who test positive won't be legally required to isolate either — although it will still be recommended. Isolation hotels will close and quarantine supports will end.

Reaction to Hinshaw's announcement Wednesday was swift and critical — much of it on Twitter. Opposition politicians, the medical community and private citizens all weighed in.

On Thursday, Calgary Mayor Naheed Nenshi said it is insanity that Alberta is eliminating almost all of its remaining COVID-19 public health orders as cases climb in the province.

"It is inconceivable to me. It is the height of insanity to say we don't even know what's happening," Nenshi said.

"It is putting the health of Albertans at risk to stop contact tracing, to stop testing people for the coronavirus and to become one of the first — if not the first — jurisdictions in the world to say that people who have tested positive, who are infectious, can just go about their lives."

Nenshi, who was making an announcement at the Calgary airport, said if he were in another jurisdiction he would contemplate travel restrictions on Albertans starting Aug. 16.

"I'm aware of no science that backs this up. It is clear for the last month or so on this file our government has been grasping and struggling, just trying to get some good news out of something," he said.

"Even the most fervent of the anti-maskers wouldn't say (to) unleash people who are actually infectious into the population."

Nenshi said he worries the decision to lift the health orders is politically motivated and has nothing to do with science at all.

Abboud, who teaches at Calgary's Mount Royal University and has a child starting kindergarten in the fall, said the United Conservatives are taking a gamble and the odds aren't in their favour.

"I feel like I'm sending my child into the COVID Wild Wild West," said Abboud. "It really feels like this government has no interest whatsoever in supporting families in ... diminishing the risks to anyone under the age of 12 who can't get vaccinated."

She's also worried about returning to the classroom come September. Abboud said poorly ventilated rooms and teaching an age cohort with lower vaccination rates is concerning, especially as it will be unknown who's infected.

"This government likes to gamble on a lot of different approaches. They've lost in many ways and this is, I think, unfortunately, another one," she said. "It's just so shocking and saddening that it's on the backs of parents and women, in particular."

Edmonton Mayor Don Iveson said he was surprised by the timing of the government’s announcement as infections and highly contagious variants continue to spread in Alberta and globally.

“What is clear is that we need more Edmontonians to get vaccinated so that we can protect ourselves and our communities,” Iveson said in a statement Wednesday after Hinshaw's media briefing.

He said city council will discuss any changes to Edmonton’s pandemic response on Aug. 12.

-- With files from Dean Bennett in Edmonton

Alberta ends isolation rules for people with COVID and their contacts