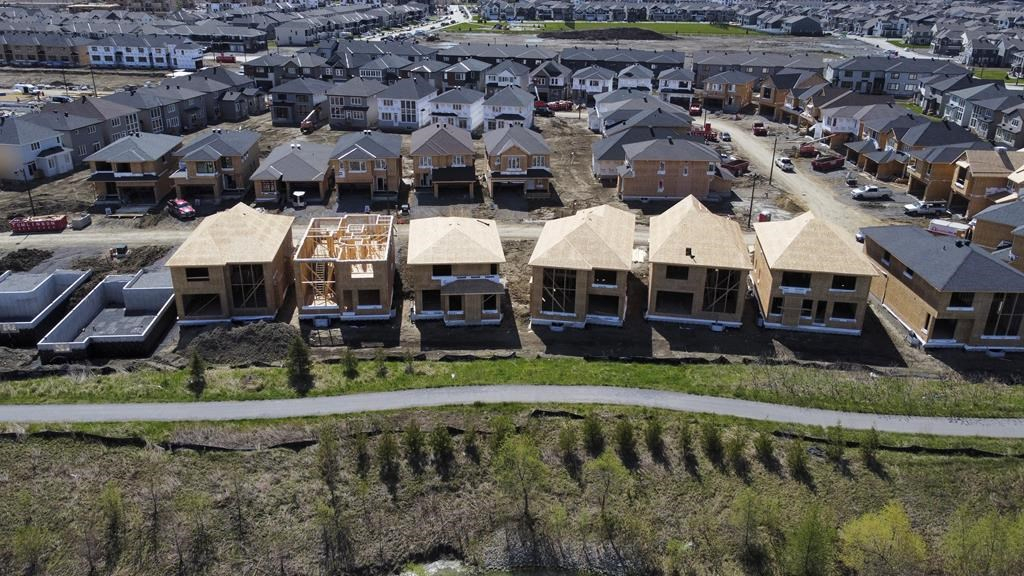 New homes are built in a housing construction development in the west end of Ottawa on Thursday, May 6, 2021. Photo by: The Canadian Press/Sean Kilpatrick
Previous story

OTTAWA — The federal government has spent less than half of the funding earmarked for a pair of flagship housing programs as the need for affordable homes grows along with a yawning "affordability gap," says Canada's budget watchdog.

Program lags at the Canada Mortgage and Housing Corporation (CMHC), expired community housing deals with the provinces and a shift toward pricier affordable homes have "limited the impact" of the Liberals' national housing strategy, budget officer Yves Giroux said in a report Tuesday.

Since 2018, the CMHC, which oversees the bulk of the three-year-old plan, spent 49 per cent of the $1.2 billion allocated for the National Housing Co-Investment Fund and the Rental Construction Financing Initiative.

The former provides a mix of loans and forgivable debt to those building affordable homes and multi-use projects, and the latter supports new rental housing builds across Canada.

Ottawa topped up overall expenditures on its national housing strategy by nearly one-quarter for an average of $3.7 billion annually over the past three years. Despite the spending ramp-up, the government is falling short of its aim to vastly expand Canada's affordable housing stock, the report states.

Giroux projects that the number of households in need of an adequate or affordable place to live will increase to about 1.8 million within five years unless more funding flows toward the problem. The affordability gap — the difference between the cost of a housing unit and the price a low-income Canadian can afford — is slated to rise by 24 per cent to $9.4 billion over the next five years, he calculates.

Heftier personal savings, house-obsessed millennials and historically low interest rates during the COVID-19 pandemic have conspired to send residential prices soaring amid a dire shortage of units, and threaten to boost rents when provincial freezes thaw.

The average home-sale price in Canada rose 26 per cent year over year in June to $679,000, with sales activity up by 14 per cent, according to the Canadian Real Estate Association.

However, Conservatives say the report shows the Liberals failed to meet their targets or make homes more affordable, calling the programs "delayed, mismanaged and ineffective."

"Flashy announcements and promises of ever-increasing spending will not fix the housing affordability crisis in Canada. We need a housing plan in Canada that gets homes built and empowers Canadians to be able to own a home in their lifetime," Tory housing critic Brad Vis and Conservative House leader Gérard Deltell said in a statement.

#CMHC has buckets of money set aside for #affordablehousing but the projects are hard to approve and the program is having limited impact, budget watchdog reports. #cdnpoli

They noted that despite the increase in overall funding, the CMHC’s assistance for housing need programs targeting low-income households rose by $192 million per year — which actually represents a 15 per cent drop in the purchasing power of federal spending in a white-hot real estate market, the report found.

The NDP called the Liberal housing strategy "smoke and mirrors."

“More and more Canadians find themselves unable to afford a home and the pandemic has made things even worse. Today’s report confirms that the Liberals are failing Canadians on housing while patting themselves on the back for a job well done,” New Democrat housing critic Jenny Kwan said in a release.

Kwan has criticized the National Housing Co-Investment Fund for failing to help provinces outside of Ontario.

Data she obtained last fall showed nearly 74 per cent of the financing for loans and grants has gone to Ontario projects from its inception in May 2018 to June 2020.

As of last October, the CMHC had committed to creating 12,230 affordable housing units under the two programs, with nearly two-thirds of them capped at 72 per cent of median household income — well above the roughly half of median market rent mandated for the other one-third, according to Giroux's report.

In April, the federal budget promised $2.4 billion over five years, beginning with nearly $1.8 billion this fiscal year, for affordable housing and followed through on a pledge to tax foreigners who own vacant homes in Canada.

The Liberal government's 10-year housing strategy, which kicked off in 2018-19, "is marketed as a "$70-billion-plus plan" that includes the budgetary cost of loans and channels $36.7 billion to the CMHC, Giroux's report says.