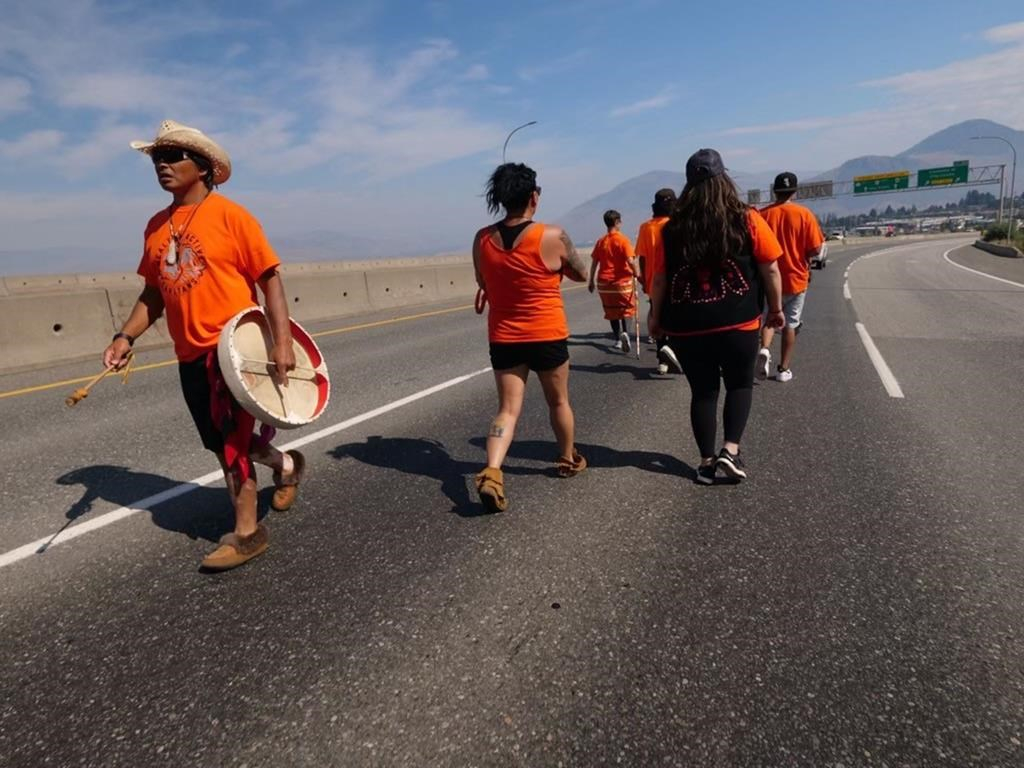 A six-week, 2,000-kilometre walk to honour children and survivors of residential schools that began in Yukon ended Monday in Kamloops, B.C., "ground zero for where the truth broke out," says the man behind the Warriors Walk for Healing Nations.

When Jamie Henyu heard about the discovery of what are believed to be the remains of more than 200 children on the grounds of the former Kamloops Indian Residential School in May, he wondered how he could honour them and survivors of the state-sponsored institutions.

Henyu said he originally thought he'd be walking alone, starting from Telegraph Creek in the northwestern corner of B.C., but support from the Northern Nations Alliance led the walk and fundraising effort to start in Whitehorse in late June instead.

A welcoming event hosted by the Tk’emlúps te Secwépemc Nation took place Monday in Kamloops, their final stop, where a sea of people wearing orange shirts were gathered.

The walking group grew as it stopped in many communities along the way, said Henyu, who is a member of the Tahltan Nation. Their support vehicles were painted with orange handprints and adorned with signs and flags of participants' home nations.

"I did have a vision at the end where I was going have a lot of people behind me, but in between the start and the finish, I thought it would be just me," he said. "Things change and it's awfully wonderful having everybody here who's walking with me."

Corinna Yuill said she's known Henyu for years and felt she needed to be part of the journey. She was joined by her husband, who was driving the family's RV, and their 18-year-old son, who participated in his wheelchair.

"I grew up in a community with three reservations and it's very personal to me, that the people I know have all been affected by residential school," Yuill said in an interview. "It's a big part of our life and I walk for everybody, for every child, every woman, every man, every elder, every survivor, every one of our people that suffer."

Henyu said he walked more than 80 kilometres one day before group members decided to take turns walking in 10-kilometre stretches to conserve energy.

Just about every Indigenous community on their journey south invited the group in for food, housing, singing, storytelling and support, he said.

"Them coming out and telling us their story about residential school and helping them to start healing is so beautiful," Henyu said of people they've met.

The group has also encountered people "on the side of the road who had no idea about residential school, and the conversation ended in tears," Yuill said.

The walking family is now getting ready to say emotional goodbyes, said Henyu.

"It's getting so real that this is almost over and when we started it felt like we'll never get to this point, but here we are now. It's amazing and scary at the same time."