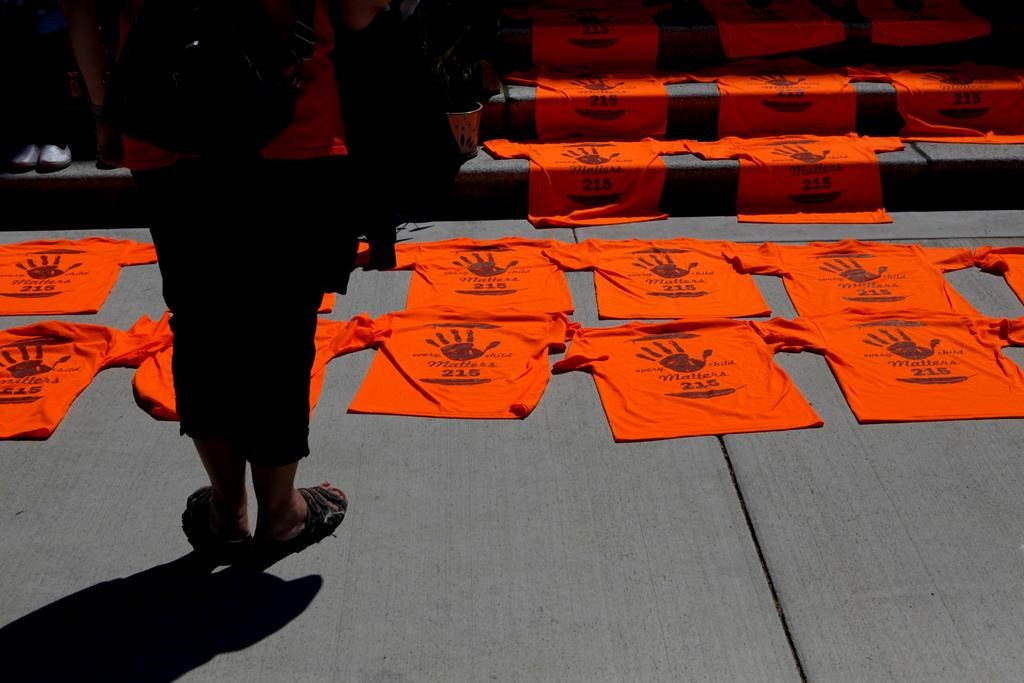 A woman looks over orange shirts, shoes, flowers and messages displayed on the steps outside the legislature in Victoria on Tuesday, June 8, 2021. THE CANADIAN PRESS/Chad Hipolito
Previous story
Next story

CRANBROOK, B.C. — The Lower Kootenay Band in British Columbia's southern Interior says a search using ground-penetrating radar has found the remains of 182 people in unmarked graves at a site close to a former residential school.

It says the community of aq'am began using the technology last year to search a site near Cranbrook that's close to the former St. Eugene's Mission School.

The band said in a news release Wednesday that the search found the remains in unmarked graves, some as shallow as 90 centimetres to 1.2 metres. It's believed the remains are those of people from Ktunaxa nations, including aq'am and the Lower Kootenay Band, as well as other neighbouring First Nations.

The Lower Kootenay Band said it is in the early stages of receiving information about what has been found, and it is asking for the public to respect its privacy.

The release said it's estimated about 100 Lower Kootenay Band members attended the institution that was operated by the Catholic Church from 1912 until the early 1970s.

The building is now home to the St. Eugene golf resort and casino, which is owned and operated by a partnership comprised of aq'am, the Lower Kootenay Band and three other Ktunaxa nations, according to the aq'am website.

An interpretive centre at the site includes displays showing Ktunaxa culture and traditions and the history of St. Eugene's Mission School, the website says.

In response to a question sent to the aq'am community Facebook page, a moderator said the nation would post a media release as soon as it's available.

The process to build the resort took "ten incredibly difficult years," a page on its website says, beginning with family visits and two years of engagement with more than 1,500 members of the five bands that share the reserve lands it was built on. Finally, it says, all bands voted in favour of restoration in a referendum.

Cowessess First Nation last week announced ground-penetrating radar had detected 751 unmarked graves at the former Marieval Indian Residential School east of Regina, a few weeks after what are believed to be the remains of 215 children were found at a former residential school in Kamloops, B.C.

The Lower Kootenay Band in British Columbia's southern Interior says a search using ground-penetrating radar has found the remains of 182 people in unmarked graves at a site close to a former residential school.

The B.C. government is providing $12 million to support First Nations doing investigative work at former residential institutions and for programs to help community members experiencing trauma after the recent findings.

The province said this week it's working with a number of nations that have requested assistance in determining next steps for searching the sites. Those nations include the Tk'emlúps te Secwépemc in Kamloops and the Daylu Dena Council in Lower Post, where a former residential school is being demolished.

This report by The Canadian Press was first published June 30, 2021.