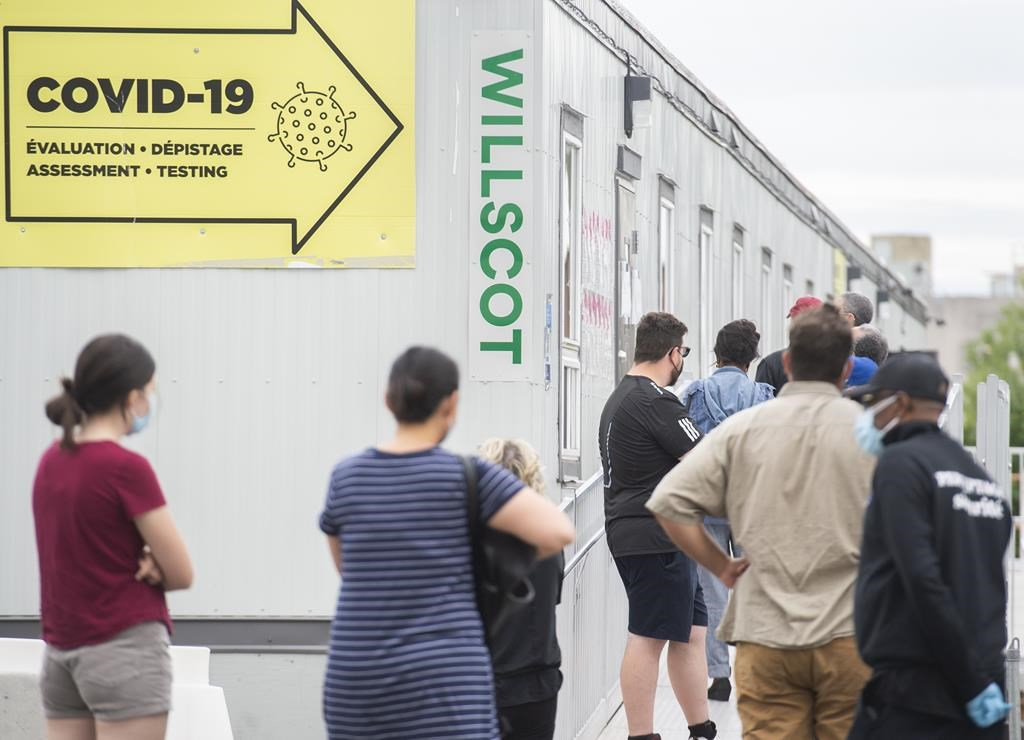 People wait to be tested for COVID-19 at a clinic in Montreal on Aug. 1, 2021, as the COVID-19 pandemic continues in Canada and around the world. Photo by Graham Hughes / The Canadian Press
Previous story

MONTREAL — Health-care workers in Quebec will be required to be fully vaccinated against COVID-19 by Oct. 1, Premier François Legault said Tuesday.

While 90 per cent of health-care workers in the province are already vaccinated, Legault said the remaining 10 per cent pose a risk to patients.

“The recommendation of public health is clear, there's a risk for vulnerable patients,” he said. “Of course, it's hard for the workers, but we have to protect patients.”

The mandate will apply to any health-care worker who is in contact with patients for more than 15 minutes at a time, including nurses, doctors, and ambulance workers, and it will apply to both private sector and public sector employees, Health Minister Christian Dubé said.

Health-care workers will be expected to get a first dose of a COVID-19 vaccine by Sept. 1 and a second by Oct. 1, Legault added.

The premier said he has not decided what the penalties will be for those who refuse to be vaccinated, adding the issue will be part of consultations with opposition parties, which he said could start as early as next week.

Other public sector workers, such as teachers and bureaucrats, are not targeted by the vaccine mandate, but Legault said the consultations will also include discussions on whether to extend the vaccination requirement beyond health-care workers.

Legault faced criticism from opposition parties last week after his government introduced plans for a vaccine passport without consulting the other political parties. The government will require people to show proof of vaccination starting Sept. 1 before they can enter places such as bars, restaurants, and festivals.

The premier had said he didn't think a debate was necessary on vaccine passports, adding that opening up discussion in the legislature on the issue would expose Quebecers to conspiracy theories. But vaccine mandates are different, he said.

“For me, there is a large difference between the vaccine passport, where we’re talking about non-essential activities, and mandatory vaccination, where we say someone is required to be vaccinated, and if you don’t, you can’t work,” Legault said.

Since April, Quebec has required unvaccinated health-care workers to be tested for COVID-19 three times a week, but Legault said Tuesday that measure is no longer sufficient.

While 90 per cent of health-care workers in #Quebec are already vaccinated, Premier François Legault said the remaining 10 per cent pose a risk to patients. #COVID19 #VaccineMandate

Quebec's announcement on the vaccine mandate came amid rising COVID-19 cases. “It’s high, it’s increasing and experts expect that it will continue to increase in the next few weeks,” Legault said. It also came one week after the government said it would impose a vaccine passport system.

Dubé said the government is considering integrating its passport system with the federal government's ArriveCAN smartphone application, which travellers are required to download. He said that would help tourists enter bars and restaurants after Sept. 1. He said the province may also ask visitors to visit a vaccination site and show proof of vaccination in order to obtain a quick-response code, which can be scanned by businesses covered by the passport system.

Quebec is the latest province to become stricter about COVID-19 vaccination requirements.

Ontario's chief medical officer of health said Tuesday that employers in health and education will be required to ask workers about their vaccination status and that those who aren't fully vaccinated, or who don't have a documented medical exemption, will need to take an education session and be subject to regular tests.

Dr. Kieran Moore said that directive takes effect on Sept. 7, covering hospitals, ambulance services, and community and home-care service providers. It will be similar to one already in place in long-term care homes, and mirrors staff policies introduced by some hospitals.

On Thursday, health officials in British Columbia said vaccination against COVID-19 will be a condition for employment at long-term care centres and assisted living facilities in the province. Workers have until Oct. 12 to get vaccinated.

He said the Health Department is still considering whether to impose a mask-wearing order inside classrooms for primary and secondary schools.

Quebec reported 323 new cases of COVID-19 on Tuesday and no more deaths attributed to the novel coronavirus. The Health Department said hospitalizations rose by six, to 88, and 27 people were in intensive care, unchanged from the prior day.

Officials said 42,634 doses of COVID-19 vaccine were administered Monday. Quebec's public health institute says 85.6 per cent of residents 12 and over have received at least one dose of vaccine, and 75.6 per cent are considered adequately vaccinated.