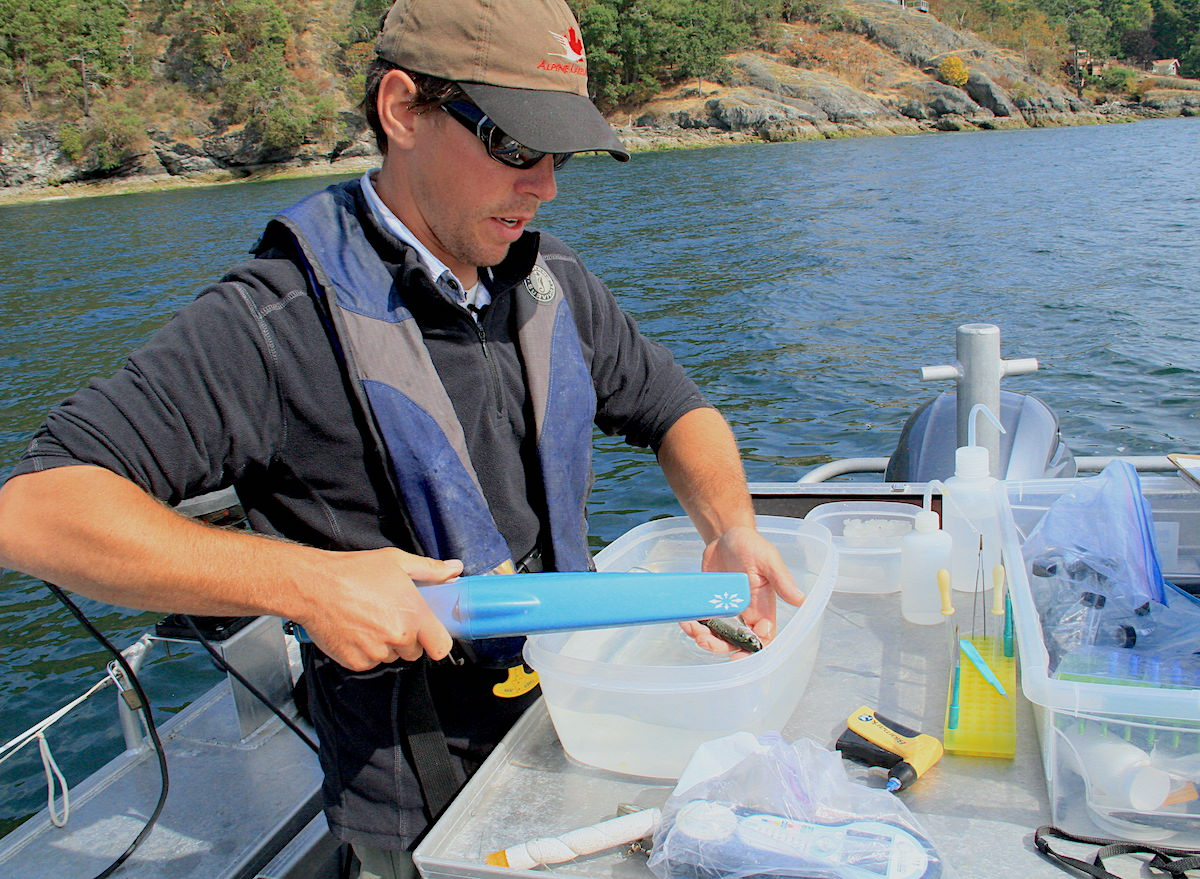 A scientist involved in the Salish Sea Marine Survival Project scans juvenile salmon in Sansum Narrows in the Strait of Georgia. Photo courtesy of the Pacific Salmon Foundation
Previous story
Next story

For millennia, the Salish Sea — the shared body of water linking northwestern Washington state and southern B.C. and encompassing the Puget Sound, Strait of Juan de Fuca, and Strait of Georgia — was abundant with salmon.

The keystone species is the bedrock of the entire ecosystem of the Pacific Northwest. All seven species of Pacific salmon populated the Salish Sea — sustaining a host of other iconic animals, such as bald eagles, southern resident killer whales, and grizzlies, along with their surrounding aquatic and terrestrial environments and scores of Indigenous nations and cultures.

But beginning in the late 1970s, salmon survival, particularly for chinook, coho, and steelhead — which migrate to the ocean like salmon, but can spawn multiple times — began a mysterious downward slide, especially in the marine environment, said Isobel Pearsall, director of marine science at the Pacific Salmon Foundation (PSF).

Some populations in Salish waters have plummeted as much as 90 per cent, and limiting fisheries, restoring habitat, and improving hatchery practices weren’t making significant differences, Pearsall said.

It’s clear juvenile fish are particularly vulnerable, and that there is something particular to the Salish Sea impacting survival of the three species, which aren’t facing the same pattern of decline in other regions, she said.

So, in partnership with Long Live the Kings, another non-profit foundation south of the border, PSF launched a five-year research initiative involving 60 different entities to understand what was driving some salmon stocks to extinction and what could be done to reverse it, she said.

Despite the dire situation salmon face, the key findings of the recently completed Salish Sea Marine Survival Project can act as a roadmap for priority action, research, and policy, said Pearsall, co-ordinator of the initiative.

“It’s very easy to get pulled down into the doom and gloom of what we’re seeing around salmon declines,” Pearsall said.

“But the (survival project) has highlighted the areas that we really want to focus on and that we know are crucial.”

The Salish Sea is weathering some significant changes due to the climate crisis, such as warming waters, increasing risk from harmful algae and pathogens, shifts in the marine food web, and the decimation of estuary and foreshore habitats, the study found.

The cross-border #SalishSea survival research project found food supply and predation of young salmon are two key contributors to the declines of chinook, coho and steelhead as they enter the marine environment. @Longlivekings @PSF #wildsalmon

Many of the changes impacting salmon are interlocked, Pearsall said.

“One might hope for a smoking gun and that there would be one major thing you could change to solve the whole issue, but that doesn't seem to be the case,” she said.

However, the initiative concluded that salmon food supply and predation of young salmon are two key contributors to the declines of chinook, coho, and steelhead when they first enter the marine environment.

Changes to the Salish Sea affect when, where and how much food is available for young chinook and coho, which influences their growth and mortality.

Drops in zooplankton and forage fish, especially herring, put young salmon at increasing risk, a situation compounded by the destruction of estuaries and nearshore habitat, which provide hiding spots and food for both the fish and their prey.

The finding suggests that protecting and restoring estuary and forage fish habitats on the foreshores of the coast should be a priority, Pearsall said.

As well, increased efforts to boost declining herring populations and study their distribution and movements are important.

Young salmon are also under pressure from a growing number of harbour seals in the Salish Sea, the project found.

While chinook and coho are a limited portion of the seals’ diet, the number of seals negatively impacts salmon survival rates, already under strain from human-caused climate change, Pearsall said.

The study doesn’t advocate for widespread culls, which would require the elimination of up to 50 per cent of the seal population, and the constant removal of a significant proportion every year after, to have any real effect on salmon, she said.

“It’s just untenable to make such a drastic move in an ecosystem that nobody fully understands,” Pearsall said, adding other pressures and changes are also at play since abundant salmon stocks existed alongside large seal populations in the past.

“I think we need to look at the anthropogenic changes that we've made that make the salmon more vulnerable to predation,” she said.

That could include removing infrastructure like log booms in estuaries where seals can hang out waiting for salmon without fear of being eaten themselves.

Or by changing hatchery practices, such as the release of large groups of juvenile fish upriver, often in low water, which make young salmon easy pickings for all sorts of creatures, including raccoons or herons.

Implementing solutions that could ensure higher river or stream flows to provide more cover and cooler water to young salmon would give them a fighting chance against predators and increase their survival, she added.

The holistic, collaborative nature of the Salish Sea project has resulted in a framework for stakeholders on both sides of the border to respond more effectively in a co-ordinated manner to make gains in restoring endangered salmon stocks, she said.

While the study tallies the range of pressures on salmon, it has also pointed out some practical action, Pearsall said.

“We’re letting people know that what they’re doing can have impacts, both negative and positive,” she said.

“There may be some things that are out of our control, but there are many immediate actions we can take.”

No comments suggesting the

No comments suggesting the elimination of fish farms or the herring fishery? Such action would certainly improve overall health and food supplies and is easily within OUR control.

Coastal and Shoreline restoration mitigation is working well where it has been deployed - mostly to protect Human infrastructure! It seems that we have to "sell" this concept as protections for humans, rather than nature. Protecting human investments always works better than protecting nature or wildlife. Humanity is SO blinded to its dependence on Natural resources - unless like gold there is immediate wealth potential.
Kill, or if you oppose killing DEFUND all the hedge funders (who have replaced lawyers as enemy # 1)