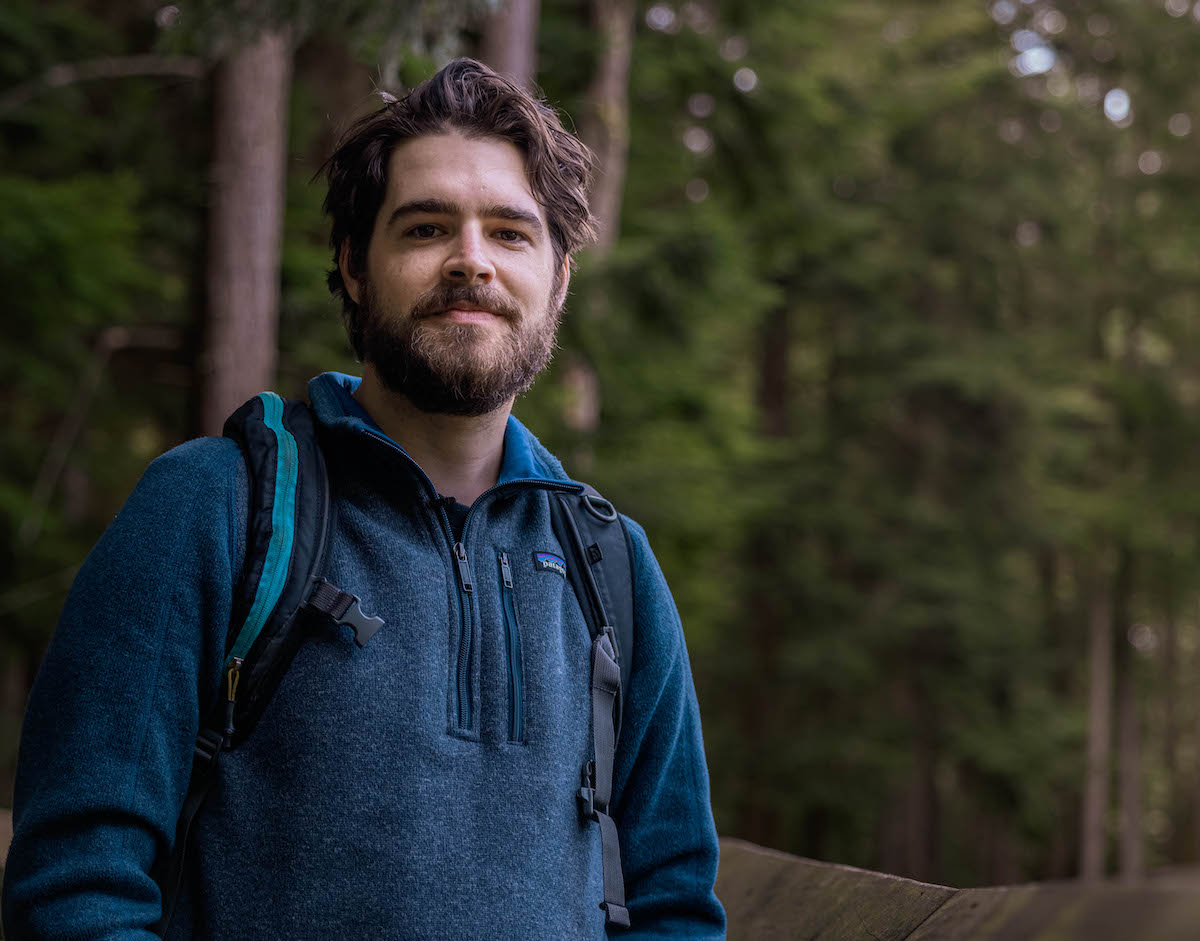 Researcher Riley Finn has found that a vast amount of critical freshwater habitat in the lower Fraser River is completely inaccessible to struggling salmon. Photo courtesy of the Raincoast Conservation Foundation
Previous story
Next story

Floundering Pacific salmon stocks are finding little refuge in the lower Fraser River — the lifeblood for the iconic species, and historically, the most significant spawning and rearing grounds on the West Coast of North America.

Researchers have found 85 per cent of the historical floodplain habitat for salmon in the lower Fraser has been lost.

The wetlands that once provided rich feeding grounds, which fattened up and sheltered juvenile salmon during spring floods before they migrated to sea, are now blocked off by dikes keeping densely populated and intensely farmed lands dry, said Riley Finn, a researcher at the University of British Columbia (UBC) and the Raincoast Conservation Foundation.

A further 64 per cent of streams in the region are now inaccessible to spawning salmon due to in-stream barriers like dams, floodgates and road culverts, according to a new study which tallies lost and inaccessible salmon habitat in the lower Fraser.

The loss of such ecosystems is particularly critical for populations of coho and chinook salmon, which rely more heavily on these freshwater habitats for spawning or rearing compared to other types of salmon, said Finn, the study’s lead author.

Coho prefer small streams for spawning, and along with chinook, can typically spend one to two years in freshwater nursery environments.

However, all salmon populations returning to the Fraser must transit the heavily developed southern corridor, Finn noted.

The research reveals the magnitude of salmon habitat loss, said senior author Tara Martin, a professor of forest and conservation sciences at UBC, adding the loss of habitat is a key concern in wild salmon declines.

At present,1,200 barriers prevent salmon from swimming approximately 2,224 kilometres of stream, Finn said, adding the next research priority is to prioritize restoration targets and identify the removal of barriers with the best chance of success in reversing salmon declines.

More than 1,200 barriers prevent salmon from swimming 2,000-plus kilometres, and 85 per cent of rich floodplain habitat is diked and bone dry along the lower Fraser River, according to @rileyyfinn, a researcher @UBC and @Raincoast. #BCSalmon

The amount of floodplain and stream habitat that remains accessible was estimated for 14 populations of salmon in the lower Fraser — five being chinook stocks, which are endangered, threatened or of special concern.

Identifying stream barriers for removal is likely to be easier than removing dikes for floodplain renewal, Finn said.

“That’s a much more complex question because we have settlement on the floodplain,” he said.

“So it kind of comes down to more local planning and opportunity searching to see when and where there might be seasonal access to the floodplain for the purpose of rearing salmon.”

The Fraser River boasts 54 unique populations of salmon — 16 that spawn directly in the lower Fraser River and its estuary.

And although the lower river represents less than five per cent of the Fraser basin’s total size, it supports more than half of the river’s chinook and chum runs, 65 per cent of its coho stocks, and 80 per cent of pink salmon, as well as significant stocks of sockeye.

However, salmon returns along the entire Fraser have reached historic lows in recent years, with some populations suffering declines of 90 per cent.

In June, the federal government revealed the framework for its $647-million strategy to save Pacific salmon, and soon after, shuttered nearly 60 per cent of the West Coast’s commercial salmon fisheries in a bid to reverse the trend.

Conservation groups are cautiously optimistic about Ottawa’s historic financial commitment to salmon conservation, but are worried how the money will be spent.

To do so would water down habitat restoration initiatives, Taylor said.

Fisheries and Oceans Canada (DFO) has stated it will use salmon strategy funds to compensate commercial fishers, but hasn’t defined how much money will be spent to do so, Taylor said.

“No one knows how much, and that’s a real concern to me,” he said.

“DFO is putting itself in a terrible position with the $647 million promised to everybody.”

Commercial fishermen need to be justly compensated for the collapse of the salmon fishery due to Canada’s collective failure to address climate change, Taylor said.

Federal Fishery Minister Bernadette Jordan will be forced to penny-pinch while retiring commercial licences at the expense of both commercial fishers and wild salmon, he added.

“My position is that the money has to come from somewhere else,” Taylor said.

“And every dollar taken to justly compensate commercial fishermen is a dollar coming out of salmon recovery.”

The inaccessibility of floodplains and streams is one of a multitude of hurdles facing salmon, Finn said, adding other factors such as warming waters, the ocean environment, fishing pressure, aquaculture and the development of estuaries all contribute to salmon declines.

But restoration of freshwater habitat on the lower Fraser is important to buoy up wild salmon stocks, he said.

“It has to be considered in the broader context of these multiple stressors,” Finn said.

“But it is one threat that we can look at improving.”